As supporters of far-right President Jair Bolsonaro staged anti-democratic demonstrations in major cities across Brazil on Tuesday, the country’s top law enforcement body briefly focused its attention on a far-right activist from the United States: For more than three hours, Brazil’s Federal Police detained Jason Miller, an ex-spokesman for former U.S. President Donald Trump, at the airport in Brasília, as he tried to leave the country.

The Tuesday rallies, meant to demonstrate popular support for a “countercoup” against Brazil’s institutions as Bolsonaro continues to spread Trump-like lies about voter fraud ahead of next year’s election, did not result in an explicit Jan. 6-style storming of Brazil’s National Congress or its Supreme Court, as some analysts feared it might.

But it came close — at least three times, supporters of the president tried to storm through police lines protecting Congress, only to be repelled, according to The Associated Press. There were at least seven such attempts nearby at the Supreme Court, Folha de S.Paulo reported.

The rallies were smaller than originally forecast but still large enough to showcase the danger Bolsonaro and his supporters pose to the world’s fourth-largest democracy. Many participants carried signs calling for an immediate military takeover of the government, an outcome Bolsonaro has said may be necessary. Speaking to a crowd in Brasília, the capital, Bolsonaro again suggested that there may not be elections in the fall of 2022 if they are not conducted on his terms. Later, in São Paulo, he leveled new threats against the Supreme Court justices who have refuted his election conspiracies and are investigating “anti-democratic acts” committed by Bolsonaro and his allies.

It’s that probe that led to Miller’s questioning, according to Metrópoles, a Brasília-based news outlet. Details are scant beyond that. Miller, who was in Brasília to attend CPAC Brasil, said in a Tuesday afternoon statement that he faced no accusations of wrongdoing.

But Miller was never likely to face real legal troubles. As the foot soldiers of Trump’s “Make America Great Again” movement continue to flock to Brazil in an effort to help Bolsonaro succeed where they failed, the Supreme Court seemed most intent on sending a signal to meddling Americans that they best butt out of the country’s affairs.

“The idea that they will bring, let’s say, the expertise of Trump to Brazil for the next election is basically what they’re worried about,” said Thomas Traumann, a Brazilian political analyst. “It’s just to say, don’t mess around with Brazil.” 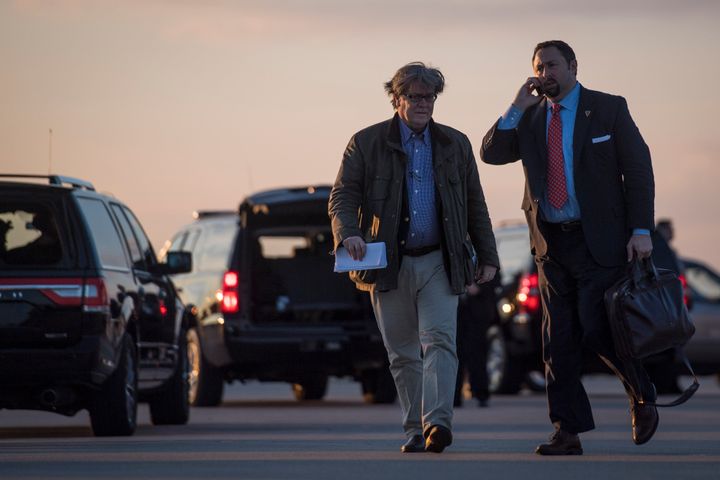 Bolsonaro sees Trump as a model for his own presidency, and it’s no secret Bolsonaro’s efforts to hang onto office despite cratering popularity are based on those of Trump. He fashioned his campaign off the American’s, and has governed like Trump too. But despite Bolsonaro’s best efforts to forge a lasting bond with Trump himself, the strongest links between the two leaders developed at a level below the presidency, among their most radical advisers and allies.

Bolsonaro’s son Eduardo, a congressman, aligned himself early with alt-right Trump confidant Steve Bannon, who wrapped Eduardo into his aspiring internationalist “Movement.” In 2019, ahead of the elder Bolsonaro’s first official visit to the U.S. as president, Bannon and Eduardo Bolsonaro co-hosted a curtain-raising event at the Trump International Hotel in Washington that presaged the Brazilian’s future as a sweetheart of the MAGA movement, which fêted Eduardo as an up-and-coming star at last year’s Conservative Political Action Conference.

The two movements were always aligned in their conspiratorial view of the world, their overly macho politics of grievance, and their autocratic whims. But ties between them have strengthened in the wake of Trump’s election loss, and as Bolsonaro faces his own future. Polls for next year’s contest show Bolsonaro running well behind his most likely challenger, the leftist former President Luiz Inácio Lula da Silva. Bolsonaro is an authoritarian with little respect for democracy, but it’s his weakened status that best explains the scale of his current attacks.

In August, Eduardo Bolsonaro traveled to the U.S. to attend a conference alongside Bannon and MyPillow CEO Mike Lindell ― one of the most strident believers in Trump’s conspiracy theories ― where Bannon falsely asserted that Brazil’s election system was rife with fraud. Brazilians widely interpreted the younger Bolsonaro’s attendance, and Bannon’s direct invocation of Brazil, as a promise that the president would contest the results of the election next year, and that he’d get an assist from Trumpworld when he did.

Last weekend’s CPAC Brasil event, meanwhile, was littered with talk of existential threats to the conservative vision of “freedom,” primarily from its American attendees, who’ve come to see Brazil as fruitful ground on which to wage the next stage of the MAGA war.

In a speech to CPAC Brasil, Tennessee Rep. Mark Green ― one of 147 Republicans who still voted to overturn Trump’s loss in last year’s election after the Capitol insurrection ― promised to fight “even against my own administration” to preserve a right-wing relationship between the U.S. and Brazil.

“Brazil is where we can have hope for the conservative movement,” Donald Trump Jr., son of the erstwhile president, said during a keynote speech delivered remotely because of flight problems, according to The Brazilian Report. “What we saw in my country is just a fraction of what’s going to happen.” 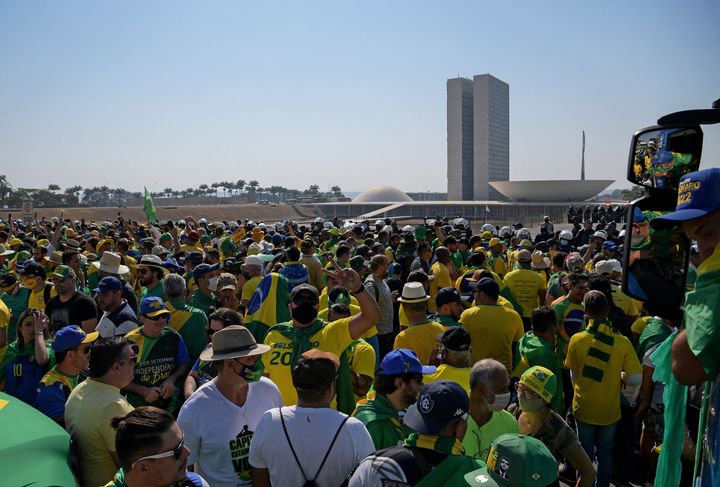 The Trump presidency, and the MAGA movement as a whole, was an unabashed grift, and it’s more than plausible that this is all merely an extension of it.

Bannon, as Andre Pagliarini wrote for The New Republic last month, sees in Brazil a chance for the sort of influence he was unable to find in Europe, and potentially a way to continue the charade that led to his indictment here on fraud and money laundering charges. The American Conservative Union, which stages CPAC, has another lucrative event to hold. Miller, now the CEO of the new social media site Gettr, has claimed that Brazilians make up the largest non-U.S. contingent of members on his new right-wing platform. Jair Bolsonaro is one of them, while Trump is not; Miller’s fledgling Twitter alternative may have more potential social clout and financial promise even in a country where WhatsApp and Telegram have cornered the misinformation market than it does back home.

But it’s hard not to think that the sort of American eager for a level of violence not even their own insurrection managed to achieve, or for the dramatic democratic rupture it failed to immediately produce, might get something even more out of all this.

Bolsonaro has spent the last three years stocking his government with military men, and the last few months attempting to persuade the Brazilian armed forces ― which ruled by dictatorship from 1964 to 1985 ― to join the cause of this particular coup. Tuesday’s rallies were organized with the explicit purpose of altering the military’s calculus further in his favor, and while they probably weren’t strong enough to accomplish that goal, the sort of full-on coup many Trumpers wouldn’t have minded seeing in the U.S., while still unlikely, is not off the table quite yet.

Bolsonaro’s most radical supporters did not need Jan. 6 to inspire their own drastic acts against Brazil’s institutions — some of them have been calling for the closure of Congress and the Supreme Court and a return to military rule since before Bolsonaro took office. But the Brazilian rallies drew from the Capitol riot Trump and his allies fomented: In São Paulo, one protester dressed up like the infamous “QAnon Shaman” rioter who stormed into the Capitol. Many demonstrators carried signs emblazoned with slogans written in English, not Portuguese.

To people like Miller and Trump Jr., Brazil is the scene for the sort of rogue fantasy they didn’t get to fully experience at home. Bolsonaro and his supporters see them as brilliant strategic minds with something to offer, as opposed to the simple-minded, one-trick ponies they are. This, in turn, feeds Trumpworld’s own delusion about the level of influence they have.

Clearly conscious of the risk this all poses (and the lack of a response from other institutions), Brazil’s Supreme Court has positioned itself as the last guardian of the country’s democracy. It has arrested and jailed numerous people for financing or financially benefiting from anti-democratic activities and misinformation, and has refuted Bolsonaro’s claims of electoral fraud.

Miller’s brief detainment may ultimately prove a small piece of the overall story, but it’s a window into one of its more worrying dynamics. Every move the court makes in an effort to protect itself and Brazil’s democracy provokes yet another threat to it. On Tuesday, two Bolsonaro advisers who’ve helped forge links with the MAGA crowd rushed to the airport to assist Miller. Later, Bolsonaro cited “an intercepted American” as one reason for his decision to “no longer comply” with any future ruling from Alexandre de Moraes, the Supreme Court justice leading the probe.

“There are three options for me: be jailed, killed or victorious,” Bolsonaro screamed to supporters in São Paulo. “I’m letting the scoundrels know: I’ll never be imprisoned!”

The court has no choice but to respond, and it plans to Wednesday. But each subsequent volley risks the sort of escalation Brazil’s other institutions may be unable or unwilling to withstand, especially if Congress remains content on the sidelines, or if the military’s top brass continues to leave open the question about its potential support for a coup instead of denouncing Bolsonaro’s authoritarian maneuvers and removing itself from the equation.

Miller and company are back in the U.S. now. But one gets the sense they’re eager for the show.