Home » Politics » Tucker Carlson: They're trying to trick us with Soviet-style fakes 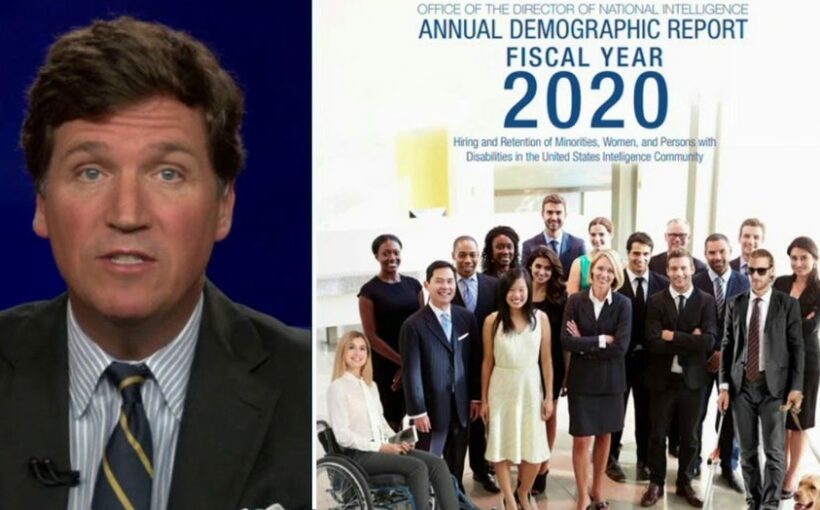 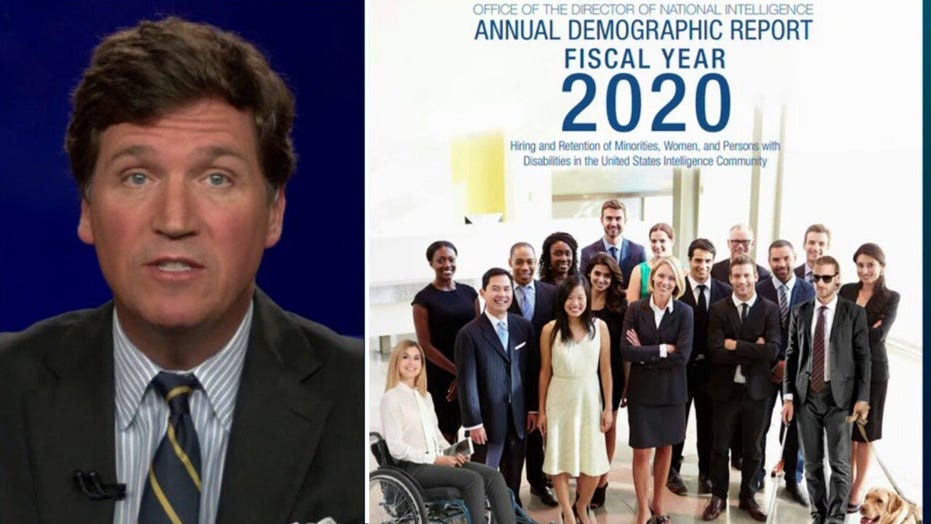 There are an awful lot of issues in the news right now. A lot of them are pretty depressing. So on this Friday, we thought we’d start with something pretty amusing.

Back in 2015, our government’s so-called intelligence community, which is not intelligent or a community, announced that it was embarking on a new five-year mission. The goal, according to the Obama administration, was to funnel more resources to every spy agency in the country — the CIA, NSA, FBI, DIA and so forth. Even the Coast Guard’s in-house intelligence operation was slated to get a bigger budget.

Under normal circumstances, an announcement like that would set off fear trembling among our opponents around the world. They’d be shaking in their caves. The Chinese might think twice before bribing more Harvard professors or sending Eric Swalwell a new secret agent to have sex with. But in this case, they just laughed. Because they knew that money wasn’t going to buy drones, or more sophisticated surveillance equipment, or more agents in the field. Instead, it was earmarked for new platoons of “equity and inclusion” consultants and HR administrators.

The point of the money was to make the intelligence community more “diverse,” meaning less White and male. Finally, America’s spies would look different. Which is essential if you want to… to… to… well, actually we’re not sure why it’s essential. What does the race and gender of intelligence agency employees have to do with keeping America safe? They never told us. Instead, they told us something we’d heard once or twice before: “Diversity is our strength.”

KAMALA HARRIS: knowing our diversity is our strength and our unity is our power.

PELOSI: And I say to them, our diversity is our strength.

OBAMA: Our diversity, our patchwork heritage, is not a weakness. It is still and always will be one of our greatest strengths.

BERNIE SANDERS: Our diversity is one of our greatest strengths.

BIDEN: I think this is an opportunity to establish that out of our diversity comes enormous, enormous strength.

How does that work exactly? Shut up. Just read the cliché. It’s on the card.

Enormous strength. We are now officially much stronger. The Office of the Director of National Intelligence has just released the proof: it’s called the “Annual Demographic Report for Fiscal Year 2020: Hiring and Retention of Minorities, Women, and Persons with Disabilities in the United States Intelligence Community.” You’ll want to get a copy in time for Christmas — not to read it. It isn’t meant to be read. In fact, it’s unreadable. But for the pictures. The pictures are amazing. We now have conclusive photographic evidence that our spy agencies employ several people with different color skin. There’s even a woman in a wheelchair, as well as a man who appears to be blind.

How do we know he’s blind? We don’t make assumptions like that. Because he’s got Ray Charles glasses, a cane and a seeing-eye dog. If that seems like a lot, remember: the best spies have a backup plan. Let’s say Russian assassins come after our blind intel agent as he’s picking up a dead drop of microfilm in a park in East Berlin. They somehow manage to take out his seeing-eye dog. Maybe with a net.

That’s OK. He can manage. He’s still got both the cane and the glasses. And by the way, we assume the cane shoots curare darts. At the CIA, they think of everything. It’s their job.

What’s the blind guy’s job exactly? What does he do in our fabled intel community? How is he keeping America safe? We don’t doubt that he is, but how? Well, we don’t know, because the report doesn’t tell us. Nor does it explain why there seems to be some sort of dark halo around the lower part of the blind man’s body in the picture? What is that? Spy vapor?

Another question: where are the old people in the picture. A lot of Americans are pretty old. The intel community says it’s diverse. So where are the senior citizens? Where are the 80-year-old super spies? You’d hate to think that for all its famous sensitively the Biden people fell prey to ageism. We may need a class action suit to sort this out. And while we’re at it, honestly, we didn’t see many trans women, non-binary pansexual two-spirits, or a single person from Malawi. That picture which we greeted with joy is starting to look problematic. 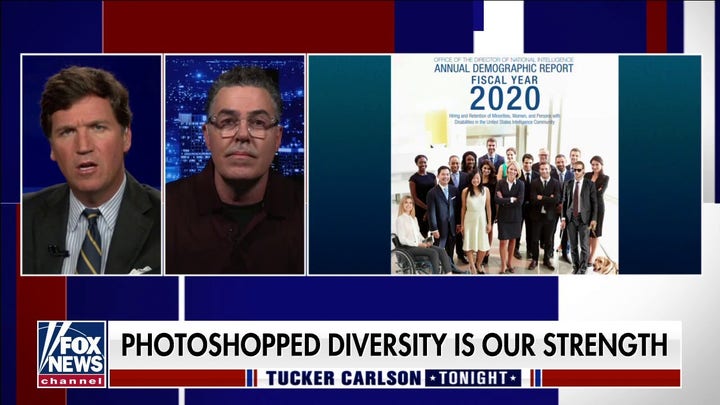 And in fact, it is. According to freelance intelligence analysis on Twitter — experts on digital manipulation — this image isn’t real. These people were never in the same room at the same time. Some don’t even work for their federal government. Maybe none of them. The whole thing is a disinformation campaign. It’s a Soviet-style fake. Apparently, the intel community spent some of its “diversity budget,” not to achieve diversity,  but to buy a stock image from a website called “Shutterstock.”

That picture is entitled, quote, “Portrait Of Multi-Cultural Office Staff Standing In Lobby.” You could buy it too and put it on your next Christmas card if you wanted to.

But apparently, the stock photo of the multi-cultural office staff wasn’t multi-cultural or diverse enough for the Biden people. So, they inserted two other stock images into the picture.

One of those images — also available on Shutterstock — is called, quite literally, “Blind young man with guide dog on white background.” Which is, what it is. The other is entitled, creatively enough, “Beautiful businesswoman with tablet computer in wheelchair on white background.”

Huh. So those aren’t really intel agents. They’re stock photos. On one level, this is good news. The intelligence community hasn’t really outed the identity of its most attractive wheelchair-bound spy, or its blind 007. So they’re safe.

This article is adapted from Tucker Carlson’s opening commentary on the March 26, 2021 edition of “Tucker Carlson Tonight.”