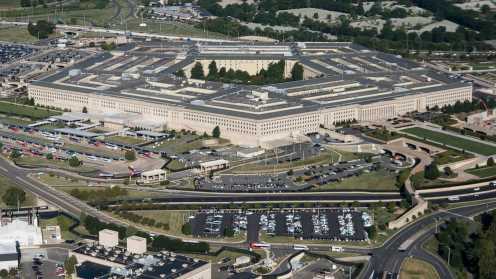 Later this month, U.S. intelligence agencies will present to Congress a highly-anticipated unclassified report about what they know about UFOs, or as the Pentagon now calls them, Unexplained Aerial Phenomena (UAPs).

However, the jury is still out on whether the report will contain the answers that UFO enthusiasts are looking for, that recent military encounters with UAPs may be proof of contacts with extraterrestrial life.

The preparation of the report marks a milestone as interest in UFOs has taken off in recent years following the Navy’s release of once-classified videos of encounters that fighter pilots had in 2004 and 2014 with UAPs.

The videos raised interest levels not only with UFO enthusiasts, but also among members of Congress anxious to learn if the UAPs captured in the videos represent advanced technological threats from foreign adversaries.

Florida Sen. Mark Rubio, then-chairman of the Senate Select Committee on Intelligence, succeeded in including language in the Intelligence Authorization Act late in 2020 that required the intelligence community to prepare for the committee a detailed unclassified report on UAPs.

A spokesperson for Rubio told ABC News that the report is due to be submitted to Congress on June 29, which is the date that marks the 180-day deadline required by the legislation when it went into effect on Jan. 1.

“Men and women we have entrusted with the defense of our country are reporting encounters with unidentified aircraft with superior capabilities,” Rubio said in a statement provided to ABC News. “We cannot allow the stigma of UFOs to keep us from seriously investigating this. The forthcoming report is one step in that process, but it will not be the last.”

The report is being prepared by the Office of the Director of National Intelligence and the UAP Task Force, an organization stood up by the Pentagon last September to look at the U.S. military’s encounters with UAPs.

“We’re providing context and information that we have on these phenomena and our focus is on, again, on supporting the DNI’s efforts to produce this report,” John Kirby, the Pentagon’s top spokesman, told reporters on Tuesday.

Though it will be an unclassified report, it is possible that its contents will not satisfy UFO enthusiasts anxious to learn if the encounters are contacts with extraterrestrials simply because it will be an intelligence report.

“The protection of methodologies is an important part of how the UAP Task Force operates,” a Pentagon official told ABC News. “This is an intelligence-driven effort, and in intelligence matters, you always try to protect the sources and methods used in order to prevent potential adversaries from getting an idea of how we learn things.”

And the report will rely on more than just eyewitness recollections of their encounters, it will be focused on the data collected by the highly sensitive sensors used by the U.S. military to detect adversaries.

“This is a data-driven examination of UAPs,” the Pentagon official told ABC News. “The more data we have, the better we are able to identify what these UAPs are.”

For scientists, the report’s focus on data is key to helping determine what is happening in the videos.

“Those derived data products, right, they can give us trajectories, they have any way of getting ideas of like masses and densities,” Dr. Hakeem Oluseyi, an affiliated professor of physics and astronomy at George Mason University, told ABC News.

“The fact that you see something, and is doing something that you don’t understand, doesn’t mean oh, let’s jump to a wild conclusion, it means let’s get the data that we can, let’s put it all together and let’s get an understanding of what we’re dealing with, because either it’s ours, or it’s not ours,” said Oluseyi. “And if it’s not ours, then we need to really understand what’s going on.”

Whether the report is able to offer up those answers remains to be seen, but for some UFO enthusiasts, what matters most is that the report is a reality.

“The fact that the report even exists or is going to exist is the biggest thing for me,” Jeremy Corbell, a documentary filmmaker and UFO enthusiast, said in an interview. Recently, Corbell has released new videos that the Pentagon has confirmed were taken by the Navy and are being reviewed by the UAP Task Force as part of its investigation.

“I think it’s a huge step forward to the general confirmation of the existence of these physical machines that do fly with impunity, within our restricted airspace,” he said. “This is not a subject of question. This is not a subject of doubt, our public has been told and proof has been given, and that’s not coming just from people like me, that’s coming from our own government.”

“So the fact this report is existing shows that representative government works, that Congress and Senate and Senate Intelligence Committee and everybody involved. These mechanisms are proceeding forward with getting answers for the American public,” Corbell said.

While Corbell does not expect the intelligence report to be “robust” in acknowledging a UFO cover, he also does not expect it to be “a whitewash” and will validate what Navy pilots witnessed in their encounters.

“It’s going to at least pay homage to that and say we need more understanding of this, and that is a huge step forward,” he said.

“If it goes further, I’m a happy camper,” he said. “But I think it’s going to be a preliminary confirmation to the American global public about the UFO presence on planet Earth. And I feel like this subject will require more investigation and more transparency.”