Home » Politics » ‘Very bad news for Boris!’ Tories turn on PM as Frost walks away – ‘Running out of time’ 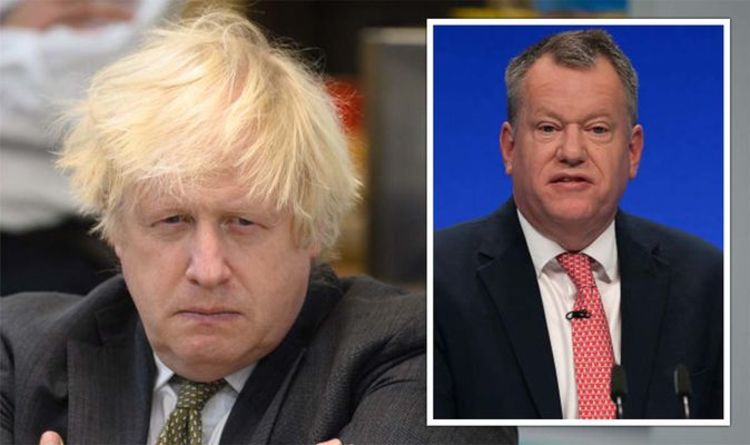 Speaking to the Telegraph’s Chief Political Correspondent Christopher Hope, one anonymous Tory MP described the development was “very bad news for Boris”. They told Mr Hope: “Boris was elected to get Brexit done.

“Frost was getting Brexit done, if it turns out that he feels that is no longer possible it removes a big reason why Boris became PM in the first place.”

Meanwhile, Tory MP Andrew Bridgen hinted at growing dissension from within the ranks of the Conservative Party itself, suggesting Mr Johnson was “running out of time” after the loss of his Brexit Minister.

Mr Bridgen, MP for North West Leicestershire, said Mr Johnson is “running out of time” to deliver on his promises in the wake of Lord Frost’s resignation.

He tweeted: “The Prime Minister is running out of time and out of friends to deliver on the promises and discipline of a true Conservative Government.

It was claimed this evening that the Brexit Secretary handed his notice into the Prime Minister a week ago.

It is understood that he has been to stay in his post until January.

The close ally of Mr Johnson decided to leave after being “disillusioned” with the Government Plan B policies on coronavirus.

A senior Government source told the Mail on Sunday that Lord Frost’s departure had been prompted by the introduction of ‘Plan B’ Covid measures, including vaccine passports.

It claimed that this was the “final straw” after months of unease as tax hikes and the cost of the Government’s policy to attain “net zero” by 2050.

News of his rumoured departure was quickly jumped on by enemies and allies alike.

She tweeted: ‘@BorisJohnson isn’t up to the job. We deserve better than this buffoonery.’

In a tweet, she said: ‘The resignation of Lord Frost from the Cabinet is a big moment for the Government but enormous for those of us who believed he would deliver for NI.’

DUP leader Sir Jeffrey Donaldson MP has said the departure of Lord Frost from the Cabinet is a bad sign for the Prime Minister’s commitment to removing the Irish Sea border.