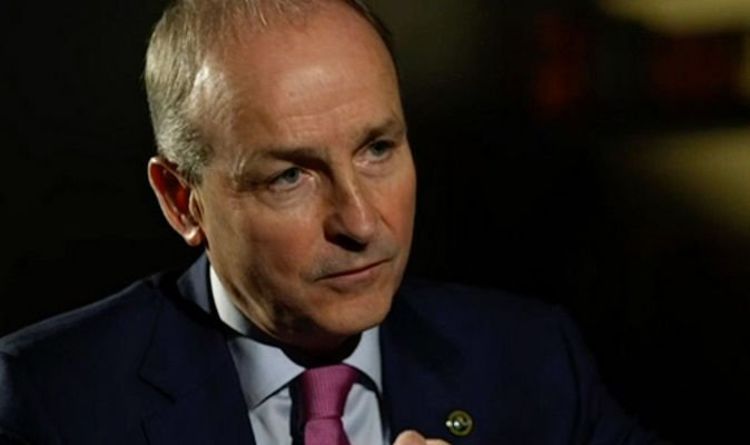 Taoiseach Micheal Martin revealed the European Union needed Britain’s “heft” with geopolitical issues and praised the contributions the UK had made in Europe. Mr Martin wanted to see the EU and UK quickly resolve their disputes, such as the Northern Ireland Protocol, and demanded a “greater harmony” for both sides. The Taoiseach was also confronted with concerns the Northern Ireland Protocol was causing misery for hauliers at the borders with Mr Martin claiming the reports of delays were “overstated”.

Speaking on BBC Newscast, Mr Martin was asked if he ever gets annoyed or frustrated with Brexit as Ireland has often been caught up in the middle of disagreements.

The Irish Taoiseach explained: “I don’t get frustrated, I mean, I do worry about it.

“Because I think, I’m a passionate believer in membership of the European Union for Ireland.

“But I accept fully the democratic wishes of the British people to leave the European Union.

READ MORE: Macron turns back on EU as he fights to win next election

“To me, Britain has contributed a lot to the European Union and to Europe more generally and has an awful lot to contribute.

“We need Britain, Britain’s heft, in terms of the geopolitical situation globally.

“So that’s why I genuinely believe there has to be greater harmony, a really strong constructive alignment of interests between the European Union and the United Kingdom.”

Mr Martin then looked at Ireland and the UK’s relationship post-Brexit and said both sides have a rich history on which to build on.

The Irish leader wanted the UK to “overcome this Brexit challenge” and move on with its relationship with other countries.

Earlier in his interview, Mr Martin revealed he was “frustrated” at Brexit getting in the way of negotiations and agreements.

He explained that while he supported the UK’s decision, the disagreements that have followed from the decision to leave has put a halt on other political issues being discussed.

Mr Martin hoped Brexit could soon be resolved so a “flowering relationship” with Ireland could be pursued.

When asked about the large number of checks at Northern Ireland ports, Mr Martin dismissed the concerns and said there was no issue at the border.

He claimed the reports were “overstated” and that it could be easily resolved between the EU and UK.

Mr Martin added he was encouraged by Lord Frost’s recent behaviour also and felt the UK was ready to fix the problems once and for all.