The district attorney’s office in Westchester County, New York, announced Tuesday that former Gov. Andrew Cuomo will not be criminally charged for two sexual misconduct allegations against him, despite “credible evidence” that such events occurred.

“Our investigation found credible evidence to conclude that the alleged conduct in both instances described above did occur. However, in both instances, my Office has determined that, although the allegations and witnesses were credible, and the conduct concerning, we cannot pursue criminal charges due to the statutory requirements of the criminal laws of New York,” Westchester County DA Miriam Rocah said in a statement.

Rocah added that the decision not to issue criminal charges against Cuomo is unrelated to any potential civil liability, which is beyond the jurisdiction of a district attorney. 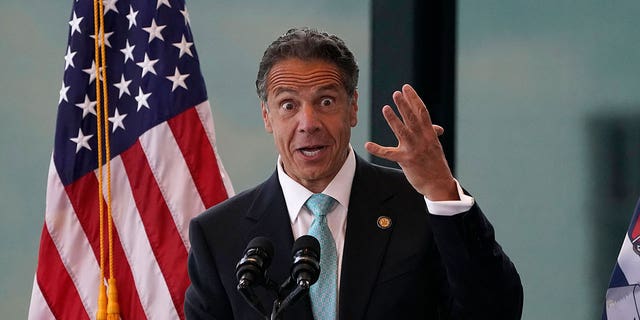 Former New York Gov. Andrew Cuomo speaks during an event at One World Trade Center in New York on June 15, 2021. (TIMOTHY A. CLARY/AFP via Getty Images)

According to New York Attorney General Letitia James’ report, the allegations related to Westchester County involved a female state trooper in his security detail who alleged that Cuomo asked to kiss her. She said she obliged because she feared the consequences of denying the governor’s request.

According to the report, Cuomo kissed her and “said something to the effect of, ‘Oh, I’m not supposed to do that’ or ‘unless that’s against the rules.’”

Another woman alleged publicly and to investigators for the DA’s office that Cuomo grabbed her by the arm and greeted her with a kiss without seeking her permission at a high school event.

Rocah’s statement went on to recognize “the bravery of the women and witnesses who have cooperated with law enforcement” and promised to maintain a commitment to supporting them and all survivors.

Last Thursday, prosecutors in Nassau County announced that Cuomo won’t be criminally charged in another sexual misconduct allegation against him that fell under their jurisdiction.

A statement from acting Nassau County District Attorney Joyce Smith at the time said that Smith’s office had “concluded” its probe into an alleged incident from September 2019 that was said to have taken place at the Belmont Racetrack.