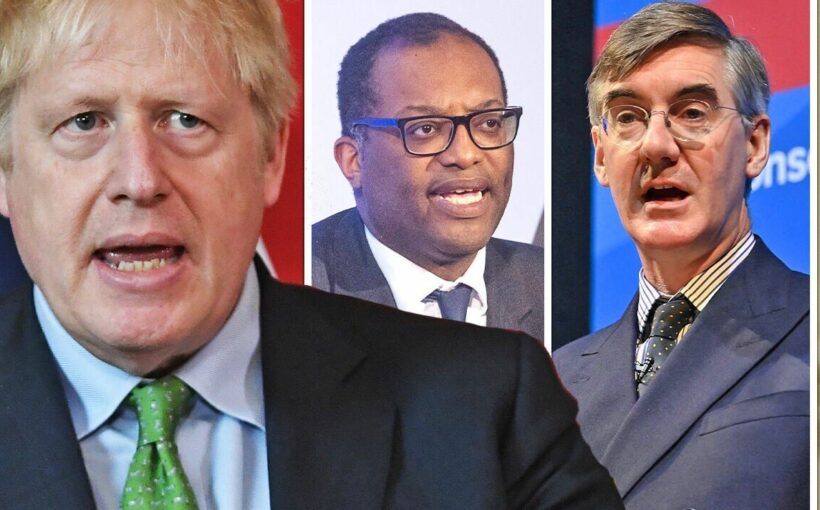 Rishi Sunak has announced a wide ranging support package to the Commons on Thursday after months of being pressured to help Britons with the cost of living crisis. But rebels within the cabinet are displeased with the Chancellor’s decision to take action on skyrocketing energy bills, it has emerged.

As part of the package to give non-repayable grants to all UK households, Mr Sunak announced it would be funded in part by a “temporary targeted profits levy”, otherwise known as a windfall tax.

In his statement, Mr Sunak said the oil and gas sector has been making “extraordinary profits” – not from shrewd business decisions, or efficiency but as a result of “surging global commodity prices, driven in part by Russia’s war”.

It is estimated the windfall tax will help the Treasury finance the grants scheme to the tune of £5billion.

The levy will be phased out when high energy prices come down, with a “sunset clause” written in to the legislation.

But despite clearly being approved by Boris Johnson before being set out before the House, senior Cabinet members have expressed opposition to the windfall tax element of the funding package.

Mr Rees-Mogg is said to have raised his concerns at Thursday’s Cabinet meeting, later saying there was not “a honeypot of free tax that governments can just pop into”.

Mr Rees-Mogg argued the money should come from cuts to infrastructure projects.

He told Sky’s Beth Rigby: “People need to understand that there is not a tax that you can take that is economically cost-free.

“Doesn’t matter which tax it is, it will have an economic consequence.”

There has also been criticism from the wider Conservative party membership, with some MPs expressing their dismay at being whipped into voting for a windfall tax.

MP Richard Drax accused Mr Sunak of throwing “red meat to socialists” with the package and windfall tax, which was first proposed by Labour more than 100 days ago.

Another disgruntled MP told the Sun they’d been made to feel like “prats” after being whipped to vote against a windfall tax just a week ago.

One Conservative MP told the i that Labour’s Rachel Reeves sounded more Tory than the current Chancellor.

Mr Sunak hasn’t just faced criticism from inside his own party, however, with Labour going for the throat over the Chancellor’s U-turn.

Shadow Chancellor Rachel Reeves told BBC Breakfast: “It is clear that Labour are winning the battle of ideas. But I too have to ask what on earth took them so long? When it was blindingly obvious to everybody else that this was absolutely necessary.

“I think the big question that still needs to be answered is how are we going to stop ourselves from being in exactly the same position this time next year?

“All economists are saying that the energy prices aren’t going down any time soon. So, what longer-term measures are the Government going to take to ensure we’re not back here this time next year?

“For example, the Government could be starting a big programme of home insulation right now to take money off people’s bills – not just for one year, but for years to come. That’d be a practical thing that could be happening at the moment.

“Keir Starmer said at the Labour Party conference last October that we should be looking to insulate the 19 million homes that don’t meet the energy performance certificates that you would expect.

“If you did 1.9 million of those homes a year, it will probably cost around £5 billion a year, but it would take £400 off people’s bills every single year. That would make a huge difference.”