Home » Politics » ‘You signed up to it – blame the EU!’ Frexiteer destroys France’s ‘childish’ threat to UK 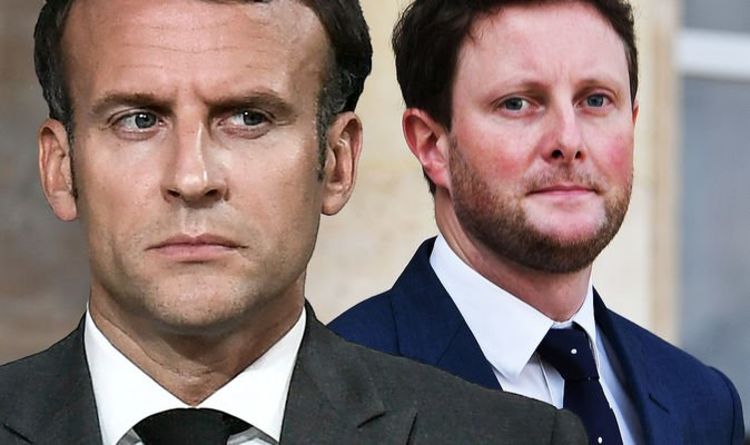 France has been left furious after the UK Government last month said it had approved just 12 of the 47 applications it had received from French small boats. That rage only intensified when it was later announced by the Jersey Government that of 170 license applications it had received from French boats, 75 had been rejected. Earlier this week, French European Affairs Minister Clement Beaune warned EU member states are preparing to announce measures to apply pressure on the UK to abide by the terms of the Brexit deal.

He stopped short of detailing what those measures might be, but noted in an interview with a French radio station that Britain depends on energy supplies it receives from Europe.

French fishing industry representatives have also threatened to block the port of Calais and stop exports to the UK in the run-up to Christmas.

But the latest threats from France over fishing access rights have been torn apart by a leading Frexiteer, who has told French President Emmanuel Macron and his right-hand man Mr Beaune they only have themselves and the EU to blame.

Generation Frexit President Charles-Henri Gallois told Express.co.uk: “The threats from Clement Beaune are quite ridiculous, above all when he says ‘Brexit deal should be implemented fully’.

“Basically, the UK is implementing it. It was a bad deal signed by the EU but Macron cannot acknowledge that as an ‘eurofanatic’.

“The deal included that the boats allowed to fish until 2026 were the ones that were fishing between 2016 and 2020.

“Many small French boats have no recording systems so they cannot prove it.

“The deal was badly negotiated, and he should blame the EU for that.”

The leading Frexiteer also lashed out at the suggestion from Mr Beaune that UK electricity supplies could be impacted, branding it “childish and counterproductive”.

Similar to Mr Macron, he described the French Foreign Affairs Minister as being “irresponsible and acting like a eurofanatic”.

Mr Gallois hit back: “The threat of cutting energy or transport is quite childish and counterproductive.

“French companies have big interests in the UK.

“We have common interests to have good relationships and to develop nuclear energy in the UK, for example, if we want to tackle climate change.

“Beaune is quite irresponsible and acting like a eurofanatic.”

The French Foreign Affairs Minister had launched a furious outburst towards Britain earlier this week, hinting at retaliatory measures over the UK’s stance on the Brexit deal hinting the UK’s energy supplies could be impacted.

He raged: “We defend our interests. We do it nicely, and diplomatically, but when that doesn’t work, we take measures.

“For example, we can imagine, since we’re talking about energy, the United Kingdom depends on our energy supplies.

“It thinks that it can live all alone, and bash Europe.”

But the UK’s Brexit minister Lord Frost quickly hit back, warning the leading EU member state needs to be “proportionate” over the ongoing fishing row.

He said it was “unreasonable” to suggest the UK was acting in bad faith when it came to allocating post-Brexit fishing licences to French boats, instead arguing London had been “extremely generous” to EU requests.

Lord Frost told a Conservative Party conference fringe event: “We have granted 98 percent of the licence applications from EU boats to fish in our waters according to the different criteria in the Trade and Co-operation Agreement, so we do not accept that we are not abiding by that agreement.

“We have been extremely generous and the French, focusing in on a small category of boats and claiming we have behaved unreasonably, I think is not really a fair reflection of the efforts we have made.”