Home » A 71km/h impact? The physics behind the car stuck in orchard crates in Hastings 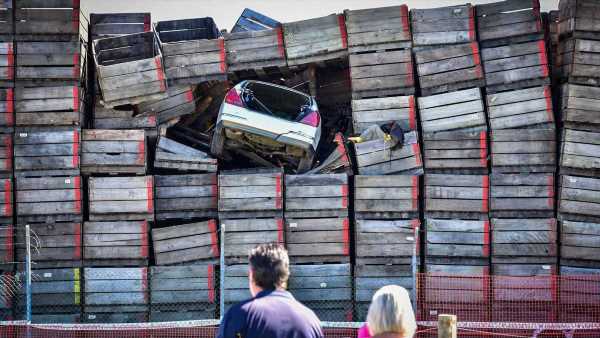 A car that ended up lodged between five and 10 metres off the ground in a pile of orchard crates in Hastings would have left the ground at a speed of at least 71km/h, a physics expert says.

A man in his 20s suffered serious injuries after the single-car crash on Kenilworth Rd, Mayfair, about 12.30am on Sunday. He remained in hospital in a stable condition today.

Police said a car failed to stop for officers after it was spotted driving at speed on the wrong side of Karamu Rd, Hastings.

The car fled police down Kenilworth Rd, before hitting a patch of gravel at the base of the railway lines and becoming “airborne”, according to police. Police said they were not in pursuit at the time of the crash.

Witnesses described the sound of a “half a second skid” and then a “bang”.

Police said the point of impact was 10 metres off the ground.

University of Auckland head of physics professor Jan Eldridge said to reach a height of 10 metres the car would have needed to be travelling at least 71km/h, but was likely going faster.

Eldridge said to get 10m high, the car would need to have an upwards velocity after hitting the train tracks.

“To work that out, I conserve energy setting the required gravitational energy to the kinetic energy and this gives me a required upward speed of 14 metres per second,” she said.

“The car wasn’t going fully ‘up’, but at a 45 degree angle to the ground after hitting the track, this means it was going faster as it was going up and forwards.”

Eldridge added: “It probably was higher than 71 km/h, but not that much higher as it depends how much damage the impact between the car and the tracks did as that can use up a lot of energy.”

Yummy Apples general manager Paul Paynter said the stack of apple bins, which are estimated to be 1.5m, are “like a giant building”.

“The stack would be about eight or nine bins high and similar depth – so the reason they didn’t fall over is because there is a whole lot of them backed up behind,” he said.

“Each weighs about 75kg so if you’ve got stacks of eight or nine of those high and deep, it’s a pretty sturdy stack to crash into.”

Paynter said there would have also certainly been a fatality if the bins had been full of apples.

“Once the car gets airborne, it’s a classic example of projectile motion. If you’re jumping straight up, you need to leave the ground at 50km/hr to get 10m in the air,” he said.

“But he was clearly moving relative to the ground, so we need both the vertical and horizontal components of his speed. If he went up a 30 degree bank, he would need to have been doing closer to 100km/h as he left the ground.”

“Whatever number you landed on, very fast is going to be a good answer here.”

Police say they are continuing to investigate the circumstances of the crash. No charges have been laid.