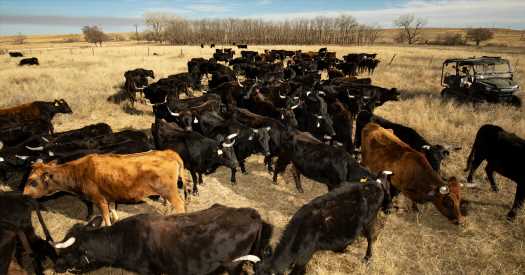 CANADIAN, Texas — Adam Isaacs stood surrounded by cattle in an old pasture that had been overgrazed for years. Now it was a jumble of weeds.

“Most people would want to get out here and start spraying it” with herbicides, he said. “My family used to do that. It doesn’t work.”

Instead, Mr. Isaacs, a fourth-generation rancher on this rolling land in the northeast corner of the Texas Panhandle, will put his animals to work on the pasture, using portable electrified fencing to confine them to a small area so that they can’t help but trample some of the weeds as they graze.

“We let cattle stomp a lot of the stuff down,” he said. That adds organic matter to the soil and exposes it to oxygen, which will help grasses and other more desirable plants take over. Eventually, through continued careful management of grazing, the pasture will be healthy again.

“These cows are my land management tool,” Mr. Isaacs said. “It’s a lot easier to work with nature than against it.”

His goal is to turn these 5,000 acres into something closer to the lush mixed-grass prairie that thrived throughout this part of the Southern Great Plains for millenniums and served as grazing lands for millions of bison.

Mr. Isaacs, 27, runs a cow-calf operation, with several hundred cows and a dozen or so bulls that produce calves that he sells to the beef industry after they are weaned. Improving his land will benefit his business, through better grazing for his animals, less soil and nutrient loss through erosion, and improved retention of water in a region where rainfall averages only about 18 inches a year.

But the healthier ranchland can also aid the planet by sequestering more carbon, in the form of roots and other plant tissues that used carbon dioxide from the air in their growth. Storing this organic matter in the soil will keep the carbon from re-entering the atmosphere as carbon dioxide or methane, two major contributors to global warming.

With the Biden administration proposing to pay farmers to store carbon, soil sequestration has gained favor as a tool to fight climate change. Done on a large enough scale, proponents say, it can play a significant role in limiting global warming.

But many scientists say that claim is overblown, that soils cannot store nearly enough carbon, over a long enough time, to have a large effect. And measuring carbon in soil is problematic, they say. 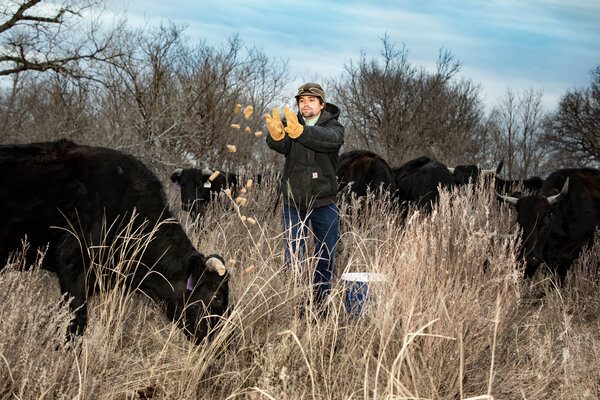 There are no clear-cut definitions of the terms, but regenerative farming techniques include minimal or no tilling of soil, rotating crops, planting crops to cover and benefit the soil after the main crop is harvested, and greater use of compost rather than chemical fertilizers.

Regenerative grazing means closely managing where and for how long animals forage, unlike a more conventional approach in which animals are left to graze the same pasture more or less continuously. Ranchers also rely more on their animals’ manure to help keep their pastures healthy.

These practices are spreading among farmers and ranchers in the United States, spurred by environmental concerns about what industrialized farming and meat production have done to the land and about agriculture’s contribution to global warming. In the United States, agriculture accounts for about 10 percent of greenhouse gas emissions.

Agribusiness companies and large food producers are launching initiatives to encourage regenerative practices, part of efforts to appeal to consumers concerned about climate change and sustainability.

And the Biden administration, in its initial moves to combat climate change, has cited agriculture as a “linchpin” of its strategy. One idea is to allocate $1 billion to pay farmers $20 for each ton of carbon they trap in the soil.

Proponents of regenerative agriculture have sometimes made extravagant claims about its potential as a tool to fight global warming. Among them is Allan Savory, a farmer originally from Zimbabwe and a leader in the movement, who in an often-cited 2013 TED Talk said that it could “reverse” climate change.

Some research has suggested that widespread implementation of regenerative practices worldwide could have a significant effect, storing as much as 8 billion metric tons of carbon per year over the long term, or nearly as much as current annual emissions from burning of fossil fuels.

While there is broad agreement that regenerative techniques can improve soil health and bring other benefits, some analyses have found that the potential carbon-sequestration numbers are vastly overstated. Among the criticisms, researchers point out that short-term studies may show strong increases in soil carbon, but that these gains decline over time.

“It’s really great to see the private sector and the U.S. government getting serious about reducing agricultural emissions,” said Richard Waite, a senior researcher at the World Resources Institute, an environmental research organization in Washington. But for carbon sequestration in soils, the institute’s analysis suggests that “mitigation opportunities are on the smaller side.”

Jason Rowntree, a researcher at Michigan State University who worked for five years for an institute founded by Mr. Savory, said that while regenerative grazing “creates a cascade of good things,” his and others’ research has shown the amount of carbon sequestered can vary greatly by region, affected in large part by the amount of rainfall and soil nitrogen available.

“Based on the amounts of these where you are, the ability to build carbon can change dramatically,” he said. “It needs to be considered in a localized context.”

What’s more, Dr. Rowntree said, using carbon in the soil as the basis for judging how well agriculture is contributing to the fight against climate change could be problematic because it is difficult to measure. As a metric, he said, “carbon is probably the worst one we could find.”

Tim LaSalle, a former executive director of Mr. Savory’s institute who later co-founded a sustainable agriculture program at California State University, Chico, said that he views the movement as “a change in looking at soil and its potential.”

“And that’s where science is lacking,” he said, arguing that most research focuses on one or two factors without considering the entire, and complex, plant-soil system.

Dr. LaSalle and colleagues are collecting data from research that shows the benefits of regenerative practices, including field trials using compost inoculated with fungi and other microbes that reduces or eliminates the need for chemical fertilizers.

“We’ve got to get the data out there to shift people’s understanding of what goes on,” he said.

Mr. Isaacs, who studied ranch management at Texas Tech University and worked for two years for the U.S. Department of Agriculture’s Natural Resources Conservation Service, does some measurement and analysis to gauge how well his efforts are working.

“We do a lot of surveys,” he said, taking photos and samples to determine microbial activity in the soil, how well plants are growing and how the mix of species is changing. “That way you can see trends,” he said. “When you’re out here everyday, it’s hard to see what you’re doing.”

He is certain that he is building more carbon in the soil, and thus benefiting the climate to some extent. But from a drive around his ranch, it is clear that a big source of pride is the visible improvements he is seeing in the land.

Stopping in one pasture on the way back to the ranch house he shares with his wife, Aubrie, he pointed to a gentle slope with a mix of vegetation.

As with other pastures at the ranch, Mr. Isaacs has used his electrified fencing to put his cattle to graze on small plots here for short periods of time — 200 head, perhaps, eating and stomping around in a space no larger than a suburban homeowner’s backyard for as little as half an hour. Moving the fencing down the pasture to new plots allows the grazed land time to recover.

“That’s what the bison did,” he said. “They’d come in a million at a time, stomp it all down and move on to fresh pasture. And they wouldn’t come back until it was time to graze again.”

The work requires planning and frequent moving of cattle. But Mr. Isaacs is aided by technology — he uses a small drone to help herd the animals, and is investing in devices that will lift fence gates on command from an app on his phone.

The cattle make one pass around much of the ranch in winter, to prepare the land for spring growth. More passes follow in spring or summer, the number depending on largely on rainfall.

“In spring, the forage grows really fast, so we’re rotating cows around the ranch really fast,” Mr. Isaacs said. “As summer progresses and it gets hotter and the growth slows down, we slow the cows down.”

Mr. Isaacs pointed to several tallgrass species growing amid shorter ones on the slope. The intensive grazing and recovery has helped these tallgrasses come back, he said, and the cattle devour them. “In the growing season, this is as good as it gets,” he said.