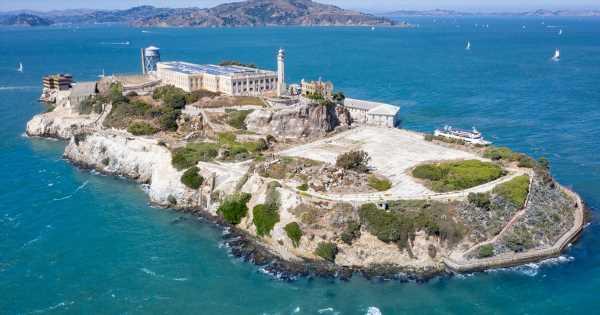 The world's most famous prison housed some equally notorious gangsters after opening its cells on January 1934.

America's most dangerous men were locked up on an island over a mile into the Pacific Ocean from San Francisco for almost 30 years.

The maximum security prison was built as an inescapable fortress where lags were granted just four rights: food, clothing, shelter, and medical care.

Of the 1,576 prisoners to have endured Alcatraz's extreme and punishing conditions, the Daily Star looks at the jail's most famous inmates from Al Capone to runaway Arthur 'Doc' Barker who was shot dead trying to flee by raft from the prison which was said to be impossible to escape from.

But it was not his record of violence which landed him in Alcatraz, it was tax dodging. The entrepreneurial thug was sentenced to 11 years behind bars on October 17 in 1931.

After a few years bribing guards for a cushy stay at the Federal Penitentiary in Atlanta, Capone was transferred to the Californian rock soon after it opened aged 35.

Despite losing his special treatment at Alcatraz he starred as a banjo player in an inmate band called the Rock Islanders. Capone found another use for the instrument in a revenge attack on James 'Tex' Lucas who stabbed him with half a pair of scissors.

Sick with syphilis, Capone left Alcatraz on January 6, 1939 for Terminal Island Prison in Southern California but rumour has it that you the ghostly sound of Capone's banjo can still be heard on The Rock.

'Machine Gun' – formerly named George Kelly Barnes – was shipped to Alcatraz on September 4, 1934 after bragging about escaping from Leavenworth Prison in Kansas.

It was thanks to his wife Kathryn Thorne that Kelly built a fierce reputation as 'Public Enemy Number One' with bank robberies she masterminded in the states of Texas and Mississippi.

The pair's biggest hit yet was demanding a $200,000 (£147,000) ransom for taking Mr Urschel hostage but after avoiding arrest for a couple of months, they were caught and later found guilty.

Once he moved from Leavenworth to Alcatraz, Kelly became AZ#117 and irritated fellow inmates by boasting about robberies and murders he never committed.

Warden Johnson regarded Machine Gun as a model inmate for his role as an altar boy in the prison chapel, laundry work and assistance in the industries office for a long period.

Together with the Barker gang, Karpis made a career out of bank robberies and kidnappings, killing anyone in their way.

'Super smart' Alvin helped mastermind the crimes using his photographic memory but justice eventually caught up with him and was sentenced to life behind bars.

He was known as an obsessive reader and would bellow in laughter every time an advert for one of his victim's businesses came on during baseball games.

Working with Karpis on the outside was Arthur 'Doc' Barker who was killed trying to escape from Alcatraz.

The pair ended up killing plastic surgeon Dr. Joseph Moran who not only left them scarred and infected but spilled news of their activities to a prostitute.

Barker was spotted on the island's rocky shore having scaled the prison's walls.

Guards ordered him to stand down and give up his break for freedom but Barker defiantly continued to tie bits of wood together in an attempt to float away on a makeshift raft.

The gangster was shot dead as he took to the water.