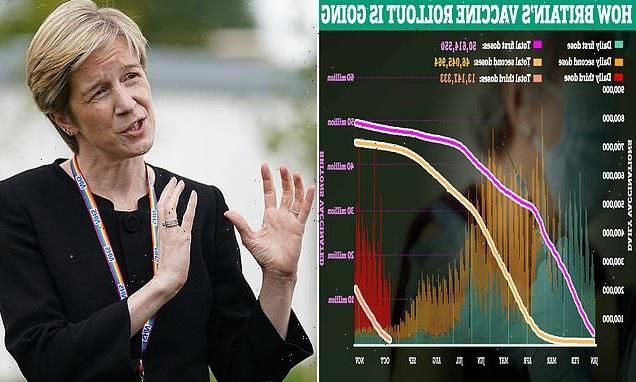 Get ready for Covid boosters EVERY winter: NHS boss Amanda Pritchard reveals health service is preparing for having to roll out annual programme alongside flu jabs 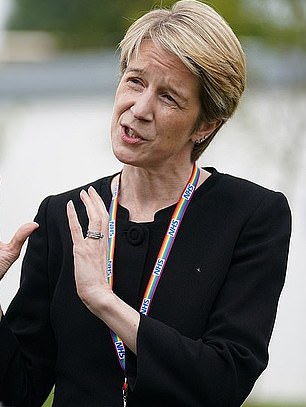 The NHS is preparing for the concept of an annual Covid booster vaccine roll-out, the head of the health service in England said today.

Amanda Pritchard said the NHS is already putting plans in place should it be required to deliver a yearly vaccine campaign — similar to the annual winter flu jab programme.

On Monday, the JCVI recommended that the booster programme should be extended to include all adults aged 40 and over, as well making new recommendations for second jabs for 16 and 17-year-olds.

In a speech to the NHS Providers annual conference, Ms Pritchard said: ‘We had the latest advice yesterday from the JCVI on extending (boosters) to the over-40s, as well as giving second doses to 16- and 17-year-olds, and I think we can expect further expansions in the future.

‘We are already thinking about how we can do annual booster vaccines, if they are needed.’

Ms Pritchard urged people to take up vaccination invitations ‘as soon as possible’ when called, highlighting that a third of people take between two and five weeks to come forward and book after they are contacted about a booster jab.

Meanwhile, the Department for Health and Social Care said that 13million booster or third jab have been given so far across the UK, including more than 1million in the last three days.

Professor Mike Tildesley, a member of the Scientific Pandemic Influenza Modelling group (Spi-M), said that repeated vaccinations could be offered ‘for years to come’ to keep Covid-19 at a bay. 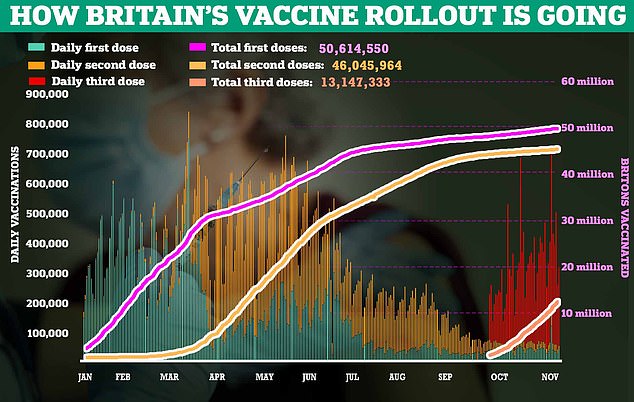 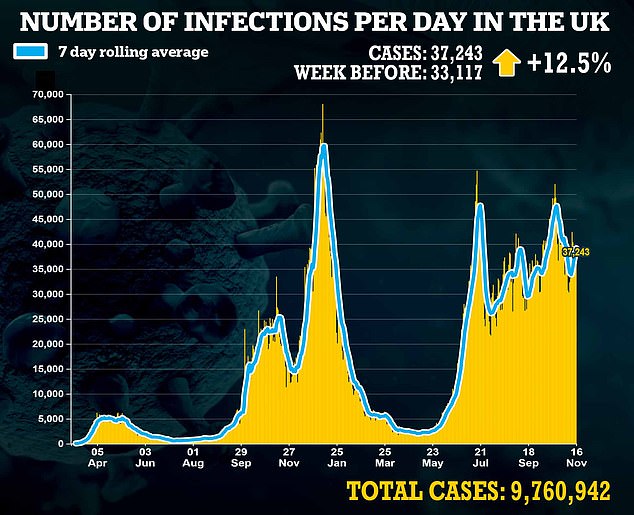 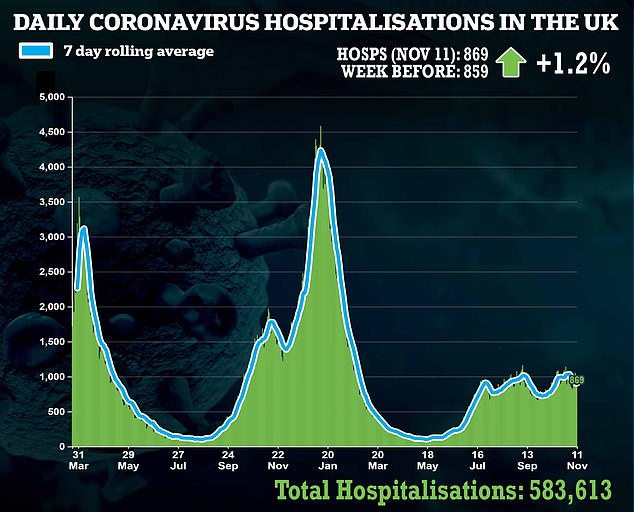 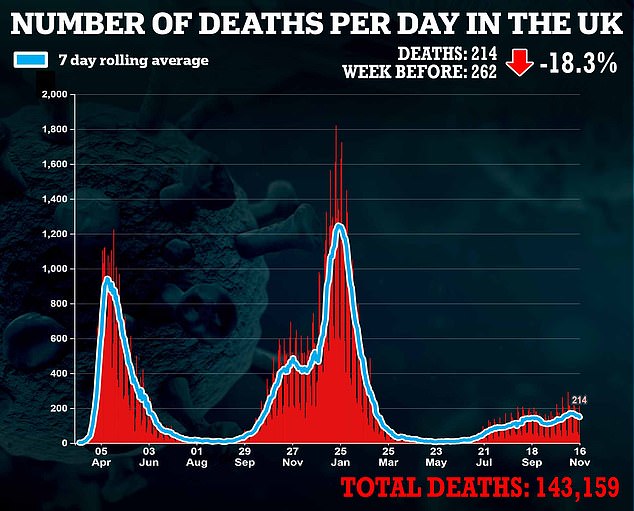 Britain’s daily coronavirus cases continued to rise today and hospital admissions are now following suit — as Boris Johnson warned ‘we’re not out of the woods’.

There were 37,243 new infections across the country over the past 24 hours, according to the Department of Health, which marked a 12.5 per cent rise on the figure last week.

Daily cases have risen week-on-week for six days in a row, with the latest surge believed to have been caused by schools going back from the half-term at the start of the month.

Deaths – which are a lagging indicator – continued to fall with the 214 victims registered today down 18 per cent on the toll last Tuesday.

But hospital admissions, which also lag behind infections, have started to nudge upwards after more than a week of decline. There were 869 on November 11, up 1 per cent in a week.

Even though Covid deaths have technically fallen for two days in a row, official data shows they have returned to levels last seen in March.

Boris Johnson has so far resisted pressure to resort to Plan B, with No10 hoping that the booster roll-out will stop the NHS succumbing to ‘unsustainable’ pressure this winter without the need for masks and vaccine passports.

Yesterday the PM admitted that a Christmas lockdown was not completely off the cards, making a desperate plea for Britons to get their top-up jabs and warning ‘storm clouds’ of infection were gathering over Europe.

Amanda Pritchard, NHS England’s chief executive, warned today that the health service would face a ‘winter like no other’ this year due to Covid, staffing shortages and unprecedented demand.

Meanwhile, Mr Johnson today repeated his loose threat of needing to take tougher action this winter as he told his cabinet that the country was ‘still not out of the woods’ in fighting the virus.

He told Sky News: ‘In the longer term, Covid is likely to become endemic and we probably are going to have to manage it with repeated vaccination campaigns for years to come.’

The number of Covid-19 patients requiring care in hospitals win England was ‘heading in the right direction’, she said, adding: ‘Though there are still thousands of very ill patients in our hospitals receiving expert care – yesterday 6,864.’

Ms Pritchard said that the NHS was facing a ‘winter like no other’ but vaccines were ‘preventing a far worse situation, with the boosters helping to tackle waning immunity’.

But the job of the vaccination programme was ‘not yet done’.

‘Our message has to continue to be: please come forward as soon as possible when it is your turn,’ she added.

She encouraged NHS leaders to redouble efforts to encourage vaccine hesitant staff to get their Covid-19 jab.

‘To those colleagues who are yet to take up that offer, I would urge you to do so as soon as you can, to protect yourself, your families and your patients too,’ she said.

‘And to you as leaders – particularly clinical leaders – it’s crucial that we redouble our efforts to support those of our colleagues who aren’t medically exempt and who are still wavering on whether to get their first Covid vaccine.

‘Not just because of the intent set out by the Government last week, but because we believe it’s the right thing to do, because we care about them and our patients, we want them to be as safe as possible and frankly we need every member of NHS staff to be there for patients.’

Ms Pritchard also highlighted how the phrase ‘necessity is the mother of innovation’ had proven true during the pandemic.

She said that a national video consultation platform for hospital services saw a ‘huge expansion of people choosing this option’ which led to a reduction of 2.1million hours of waiting time for patients.

But she said that as technology evolves the NHS must ‘always be mindful of digital exclusion and literacy’ and ensure that there are ‘non-digital routes available, that are as good, for those who want them and need them.’

It comes as the Government said a further 214 people had died within 28 days of testing positive for Covid as of Tuesday, bringing the UK total to 143,159.

Separate figures published by the Office for National Statistics show there have now been 168,000 deaths registered in the UK where Covid-19 was mentioned on the death certificate.

As of 9am on Tuesday, there had been a further 37,243 lab-confirmed Covid-19 cases in the UK, the Government said.