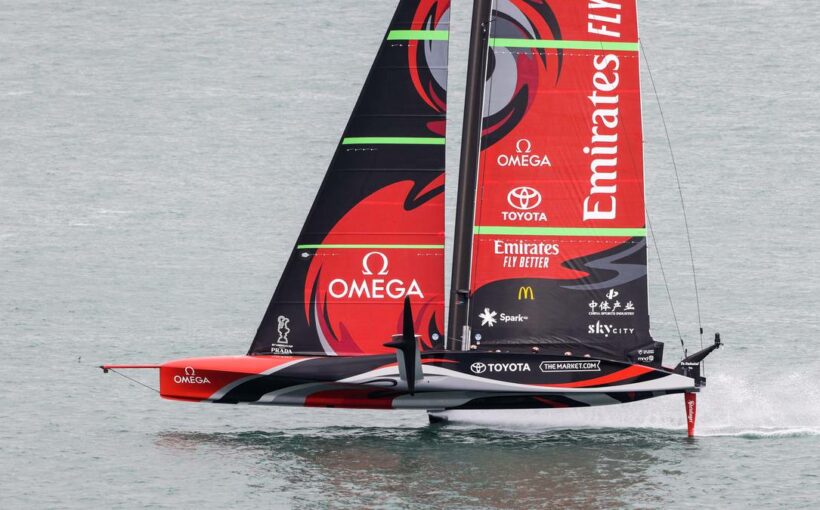 An influential rich-lister claims he has donors lined up to fund a New Zealand-hosted defence of the America’s Cup – but only if Grant Dalton steps down.

Mark Dunphy, CEO and chairman of Greymouth petroleum, is behind a last-ditch bid to stop the 2024 regatta heading offshore – it would be the first time that NZ surrenders the defence of the Auld Mug in its s own waters.

Team NZ says it has no choice to look overseas due to lack of funding – Cork in Ireland,Valencia in Spain, and Jeddah in Saudia Arabia are all bidding to host the event.

A decision on whether the regatta will be held offshore will be made onSeptember 17.

Dunphy claims there has been “no genuine attempt” by Team NZ to raise the money privately.

“The potential donors I have spoken to have had no contact from Team NZ, but I am confident they will assist with the funding of the defence,” the rich-lister told the Herald.

However, any goodwill between the parties appears to have disintegrated.

Team NZ told the Herald it was unaware of any potential donors, said Dunphy had displayed a “strange” lack of direct engagement despite being asked for a funding proposal and described Dunphy’s interest as “nothing more than a corporate takeover” of Team NZ.

Team NZ swept to victory for the fourth time and wrapped up a 7-3 series win over Luna Rossa with a 46 second victory in race 10of the regatta on Auckland’sHauraki Gulf in March.

Since the victory, there has been some controversy. In February, the Herald revealed the America’s Cup was being “shopped around” by Team NZ to overseas venues due to a lack of public funding and the looming deadline of September 17for applications to host the 37th America’s Cup.

Dunphy says he met with RNZYS on July 1 and was offered the role of chief fundraiser if Team NZ agreed.

The billionaire says nothing would make him happier than ETNZ raising its own funds.

“But if Grant Dalton and Team NZ don’t want to do that or can’t do that then I am happy to do that. In this context, it seems most donors are happy to put in funds providing Grant Dalton is not involved,” Dunphy said.

“That wasn’t my starting position but it is now. If Grant doesn’t want to or can’t raise the money, I will do it. The same position applies to Grant’s ongoing involvement with the team, if he doesn’t want to manage the cup here, I believe there are others who will do it and can do so just as well or better.”

Dunphy says he talked to Dalton over the phone in early August and the pair arranged to meet in Queenstown.

But, says Dunphy, Dalton “put the boot in” after speaking publicly about the proposal.

Team New Zealand said that after the conversation in August, it sent Dunphy a proposal on August 12 but had not heard from him.

“All we have seen is an elaborate merchant bank-type tax structure provided by a third party and to this point, due to a complete lack of clear correspondence from Mr Dunphy, we are not aware of any other ‘potential donors’.

“If Mr Dunphy’s intentions were pure, one has to ask why he hasn’t attempted to meet with ETNZ and its directors to set out his funding milestones and intended plans …”

Team NZ also opposed what it called a “complex tax” scheme which it said was suggested by Dunphy and would allow major donors to claim tax deductions.

Dunphy said there was nothing “mysterious or desperate” about what he is trying to achieve and that it is simply to arrange financial commitments to support the home defence of the America’s Cup in the 37th regatta.

“I have no personal interest in governance involvement in Team NZ. I am 100 per cent supportive of Team NZ and its world-class operational, design and sailing teams. Team NZ is New Zealand’s winning team and we love it.”

Aaron Young, Commodore of the Royal New Zealand Yacht Squadron,said Team NZ and RNZYS had not received a proposal involving private funding mixed with Government/Council funding that would enable AC37 to be staged in NZ.

“Dunphy has failed to engage with Team NZ (as requested by the RNZYS on several occasions) and has not presented a proposal for private funding that was workable,” he said.

Team NZ accused Dunphy of running a campaign to “split the strong relationship” between it and the RNZYS.

“ETNZ and RNZYS remain completely aligned in their decisions and planning for AC37 and the required resourcing of a global event and a successful defence on the water that ensures the America’s Cup trophy remains locked in the RNZYS here in Auckland, New Zealand for a long time to come.”

“We’ve heard from Mayor Goff and the Prime Minister that it’s now time for New Zealanders to reap the dividends. If one accepts public money as Grant Dalton has so readily, you have to be accountable for that …I’d like to wish Grant the best and I hope the squadron has the steel to do the right thing.”

Dunphy claims there has been a discussion in which Team NZ offering the Royal New Zealand Yacht Squadron (RNZYS) a “legacy” payment which he claimed was in the region of $3m.

An email seen by the Herald said: “There has been discussion with TNZ about RNZYS receiving a fairly significant contribution in the form of a ‘legacy item,’ if the event goes offshore.

Dunphy said Team NZ and the America’s Cup should not be for sale.

“It is absolutely outrageous. Who knows what’s come of that ‘legacy item’ and maybe it’s been forgotten about. I think the majority of the squadron wouldn’t want to know because it is repugnant,” Dunphy said.

Neither Team New Zealand nor the RNZYS would comment on the claims of a legacy payment.

The event is estimated to cost about $200m to host. A Government and Auckland Council offer totalled $31m in cash with various other non-cash items increasing the offer to a face value of $99 million.

The Herald understands the offers of public money have been withdrawn. It’s believed Team NZ is confident of raising $80m, leaving a $120m hole.

Dunphy claims to have the backing of former prime ministers, former Team NZ board directors, and Auckland Mayor Phil Goff.

“I applaud what Mark Dunphy is doing; we have known each other a long time,” Sir Michael told the Herald.

“This America’s Cup is New Zealand’s Cup. Even when we were beaten by Dennis Conner in 1987 the parade we came back to was unbelievable. The America’s Cup creates a sense of pride and enthusiasm for this event – our yachting tradition, our sailors, our designs, our waters – it is a unique package.

“We have been right behind it in those 35 years whether we won and had good times or lost in bad times – that’s a tradition you want to keep going.”

Sir Michael is concerned if the cup is sold overseas New Zealand would lose its Intellectual property and innovative technology.

“We built it up to the stage where we are the most competitive in this area of sailing. It is in effect a design competition and has always been since 1851

“This time around with the foiling monohulls was very innovative and successful from the point of watching the event combined with superior graphics. TheAmerica’s Cup industry has been great for this country and it should always stay here until somebody comes here and beats us here.”

Phil Goff said Auckland Council and the Government had been clear that there would be no more public money over and above the $100 million cash and kind original offer.

“However, if private sector funding could be found to enable the excellent infrastructure put in place for AC36 to be used a second time, we would be very supportive,” Goff said.

“Aucklanders would welcome the excitement and vibrancy that the Cup brings and the use of the facilities already in place, which are fit for purpose and ready to go.