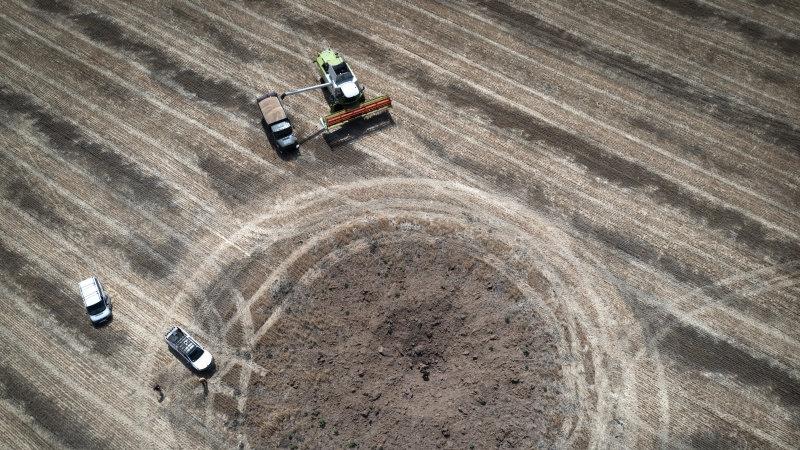 Zhurivka, Ukraine: Oleksandr Chubuk’s warehouse should be empty, awaiting the new harvest, with his supply of winter wheat already shipped abroad. Instead, his storage bins in central Ukraine are piled high with grain he cannot ship out because of the war with Russia.

The green spikes of wheat are already ripening. Soon, the horizon will look like the Ukrainian flag, a sea of gold beneath a blue sky. Chubuk expects to reap 500 tonnes, but for the first time in his 30 years as a farmer, he’s uncertain about what to do with it. 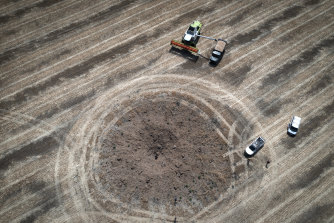 A farmer collects his harvest around a crater left by the Russian rocket on a field 10 kilometres from the battle’s frontlines, in the Dnipropetrovsk region, Ukraine. Credit:AP

“Hope is the only thing I have now,” he said.

The war has trapped about 22 million tonnes of grain inside Ukraine, according to President Volodymyr Zelensky, a growing crisis for the country known as the “breadbasket of Europe” for its exports of wheat, corn and sunflower oil.

Before Russia’s invasion, Ukraine could export 6 million to 7 million tonnes of grain per month, but in June it shipped only 2.2 million tonnes, according to the Ukrainian Grain Association. Normally, it sends about 30 per cent of its grain to Europe, 30 per cent to North Africa and 40 per cent to Asia, said Mykola Horbachov, head of the association.

With Russia’s blockade of Ukraine’s Black Sea ports, the fate of the upcoming harvest in Ukraine is in doubt. The UN Food and Agriculture Organisation says the war is endangering food supplies for many developing nations and could worsen hunger for up to 181 million people. 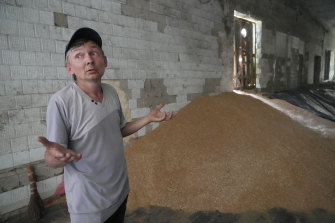 Farmer Serhiy stands near a mound of grain in his barn in the village of Ptyche in eastern Donetsk region, Ukraine. An estimated 22 million tonnes of grain are blocked in Ukraine and pressure is building as the new harvest begins.Credit:AP

Meanwhile, many farmers in Ukraine could go bankrupt. They are facing the most difficult situation since gaining independence in 1991, Horbachov said.

Turkish President Recep Tayyip Erdogan has said his country is working with the UN, Ukraine, and Russia to find a solution, offering safe corridors in the Black Sea for wheat shipments.

For now, Ukraine is trying less-effective alternatives to export its grain, at least to Europe. Currently, 30 per cent of exports go via three Danube River ports in south-western Ukraine.

The country also is trying to ship grain via 12 border crossings with European countries, but trucks must wait in line for days, and Europe’s infrastructure cannot yet absorb such a volume of grain, Horbachov said. 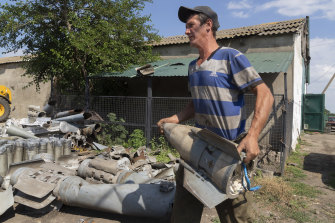 A farmer collects fragments of Russian rockets that he found on his field ten kilometres from the front line in the Dnipropetrovsk region.Credit:AP

“It’s impossible to build such infrastructure in one year,” he said.

Russia’s invasion also caused transportation costs to soar. The price to deliver this year’s harvested barley to the closest Romanian port, Constanta, is now $US160 to $US180 per tonne, up from $US40 to $US45. And yet a farmer selling barley to a trader gets less than $US100 per tonne.

The losses are piling up, along with the harvest.

“Most of the farmers are running the risk of becoming bankrupt very soon. But they don’t have any other option but to sell their grain cheaper than its cost,” Horbachov said.

On top of such challenges, not all farmers can sell their grain.

Before the invasion, Chubuk could sell a tonne of wheat from his Kyiv region farm for $US270. Now he can’t find a buyer even at $US135 per tonne.

The country hasn’t yet run out of storage as the harvest begins.

Ukraine has about 65 million to 67 million tonnes of commercial grain storage capacity, according to Horbachov, although 20 per cent of that is in Russian-occupied territories. Farmers themselves can store 20 million to 25 million tonnes, but some of that is also in occupied areas.

By the end of September, when the harvest of corn and sunflower seeds begins, Ukraine will face a shortage of storage capacity.

The FAO recently announced a $US17 million project to help address the storage deficit. Heneghan of Gro Intelligence noted that one temporary solution could be providing farmers with silo bags for storage.

In eastern and southern regions near the front line, farmers continue to work their fields despite the threat to their lives.

“It can be finished in a moment by bombing, or as we see now, the fields are on fire,” said Yurii Vakulenko in the Dnipropetrovsk region, black smoke visible in the distance.

His workers risk their lives for little return, with storage facilities now refusing to take their grain, Vakulenko said.

Ukraine had a record-breaking grain harvest last year, collecting 107 million tonnes. Even more had been expected this year.

Now, in the best-case scenario, farmers will harvest only 70 million tonnes of grain this year, Horbachov estimated.

“Without opening the [Black Sea] ports, I don’t see any solution for Ukrainian farmers to survive,” he said. “And if they don’t survive, we won’t be able to feed African countries.”