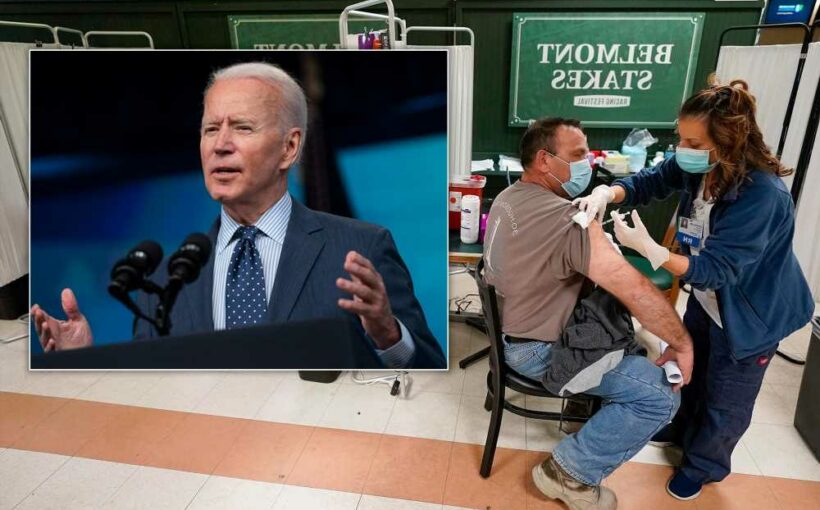 COVID-19 vaccine restores a Brazilian city to near normal

Get a shot, grab a beer: WH teams up with brewer for COVID vax giveaway

President Biden on Wednesday claimed credit for the success of COVID-19 vaccinations in the US while assigning Vice President Kamala Harris to lead a “tour” of the South and Midwest to win over stragglers reluctant to take the shots.

“Getting the vaccine is not a partisan act. The science was done under Democratic and Republican administrations. As a matter of fact, the first vaccines were authorized under a Republican president and widely developed by a Democratic president — deployed by Democratic president,” Biden said while announcing a new push to at least partially vaccinate 70 percent of Americans by July 4.

About 63 percent of US adults have received at least one shot and about 52 percent are fully vaccinated, according to CDC data.

Biden generally gives little credit to former President Donald Trump, whose name he did not utter Wednesday. The Trump administration poured billions of dollars last year into successful vaccine development and was injecting about 1 million shots per day when Trump left office in January.

Trump last year slammed Biden and Harris for expressing doubts about the safety and efficacy of vaccines.

Biden’s narration on Wednesday placed his own inauguration on Jan. 20 as a pivotal moment for the vaccination effort.

“We built a world class vaccination program. I promised you we’d marshal a wartime effort to defeat this virus,” Biden said. “And that’s just what we’ve [sic] doing. And now tens of millions of Americans have been vaccinated. They are able to return to closer to — a closer to normal life. Fully vaccinated people are safely shredding [sic] their masks and greeting one another with a smile.”

Biden said falling infection rates will allow for “an all-American summer that this country deserves,” but that the fun may be short-lived in areas with lower rates of vaccination.

“I don’t want to see the country that is already too divided become divided in a new way between places where people live free from fear of COVID and places where when the fall arrives, death and severe illnesses return,” Biden said.

Biden announced that Harris will lead the tour of areas with lower vaccination rates — adding to her substantial list of assignments, which this week grew to include opposing state-level Republican election reform laws. She will visit Central America and Mexico next week in her first trip as Biden’s anti-migration czar.

“We’re gonna launch a national vaccination tour to encourage people to take the shot. The vice president is going to lead that tour across the South and the Midwest where we still have millions of people to vaccinate. She’s going to be joined by Jill, by the first lady, and the second gentlemen and cabinet secretaries along the way,” Biden said.

Southern states have some of the lowest rates of vaccination. Polling indicates Republican voters are among those with higher rates of vaccine hesitancy. And in some areas of the country, data indicate African-Americans are less likely to take the shots.

Biden said a new initiative will distribute vaccines to black barbershops in an effort to reach customers with a convenient option. He said that people who volunteer for a new Department of Health and Human Services advocacy push may be selected to visit the White House in July.

Pfizer revealed on Nov. 9 — less than a week after Trump lost re-election — that its vaccine is more than 90 percent effective against COVID-19. The Pfizer/BioNTech vaccine and a different two-dose vaccine from Moderna were approved by the FDA in December following lengthy reviews. The third US-approved vaccine, the single-shot Johnson & Johnson version, was approved in February.

“You know some people have questions about how quickly the vaccines were developed,” Biden said Wednesday. “They say they’ve been developed so quickly, they can’t be that good. Well here’s what you need to know: Vaccines are developed over a decade of research in similar viruses and they’ve gone through strict FDA clinical trials. The bottom line is this: I promise you, they are safe, they are safe. And even more importantly they’re extremely effective.”