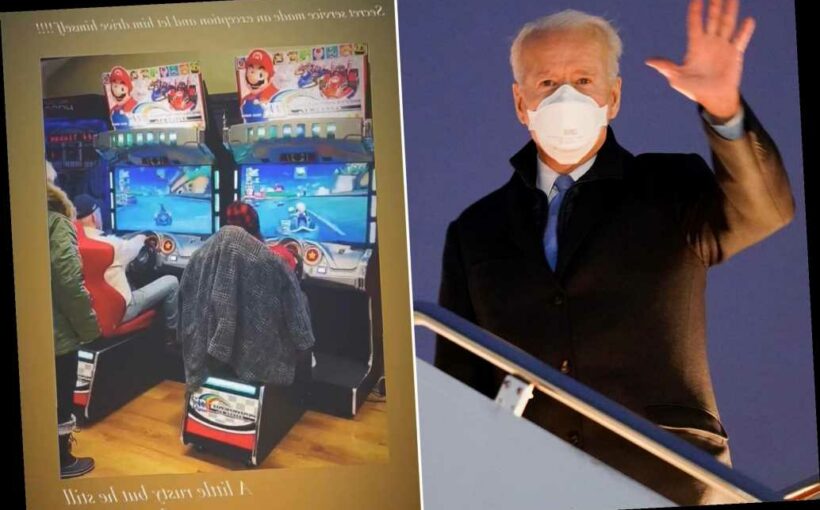 Nevermind the impeachment trial — President Biden spent time playing video games with his granddaughter during a weekend at Camp David, the presidential retreat in the Maryland mountains.

Naomi Biden, the daughter of Hunter Biden, posted in an Instagram story Saturday that her grandfather beat her “barely” in a game of “Mario Kart.”

“Secret service made an exception and allowed him to drive himself,” she posted, linking to a short video of them playing the video games. “A little rusty, but he still won (barely).”

The White House said that Biden and his family are spending the weekend at Camp David for the first time since he entered the White House in January.

Other than meeting with his national security team, the president has nothing else on his schedule.

He arrived there on Friday afternoon by motorcade after Air Force One landed in Hagerstown, Md.

Despite the impeachment trial of his predecessor, President Donald Trump, continuing on Saturday, White House spokeswoman Jen Psaki said Biden would watch a “bit” of the trial, but said he would leave it up to the Senate to decide on an outcome.

Biden’s administration was also embroiled in a scandal Saturday as another spokesman, TJ Ducklo, resigned for reportedly threatening a reporter who planned to write about his relationship with another journalist.

The heavily guarded resort in the mountains has allowed presidents dating back to Dwight Eisenhower to escape the glare of the spotlights.

Guests make their way around the rustic lodges using golf carts and can take advantage of the tennis courts, horseshoe pits, swimming pool, golf driving range, as well as sledding, ice skating and snowmobiling, the government says on its Camp David website.