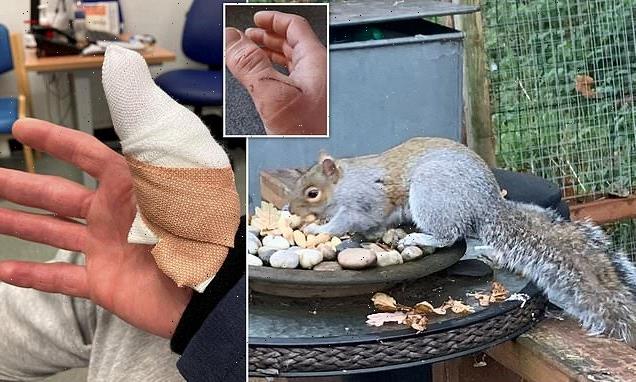 A ‘bloodthirsty’ squirrel who left residents in a small Welsh town terrorised and scrambling for tetanus jabs has been caught – after a 48-hour rampage injuring at least 18 people.

Dozens of locals have now been left with cuts to their hands after bites and scratches by the same grey squirrel, who was nicknamed ‘Stripe’ after the evil character from The Gremlins film.

The squirrel’s reign of terror was finally brought to an end yesterday, when he was captured in a humane trap by 65-year-old Corrine Reynolds and handed to the RSPCA.

Despite befriending the creature, Mrs Reynolds was also bitten on the hand and decided she needed to act after seeing multiple reports of squirrel attacks on social media.

Mrs Reynolds said: ‘I noticed yesterday that in the space of 48 hours, he has attacked 18 people.

‘He has started attacking people who are just taking their recycling bags to the bin and they are quite gruesome injuries.’ 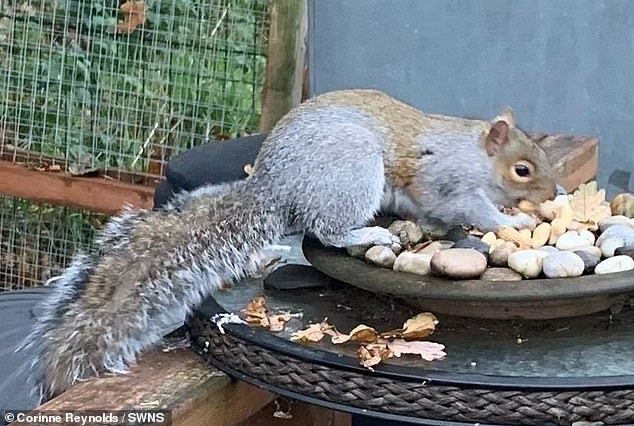 A vicious grey squirrel (pictured) has been causing havoc for a residents of a small Welsh town – attacking 18 people. He has since been nicknamed ‘Stripe’ after the villain of the film ‘Gremlins’. 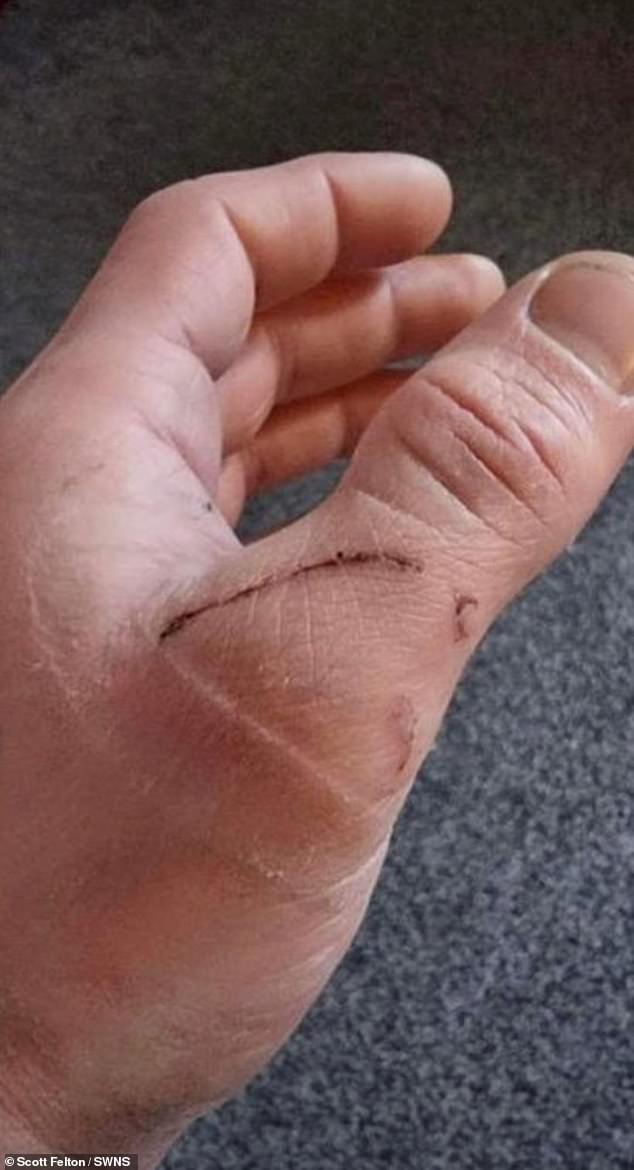 Granite technician, Scott Felton, 34, was unaware of the creature causing chaos in his town until he was bitten on Boxing Day (pictured) 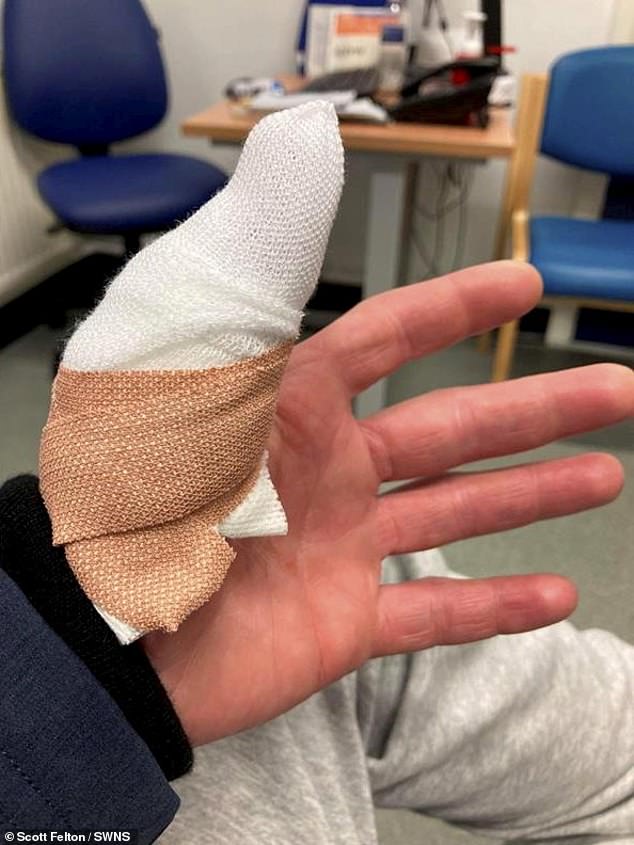 ‘After arriving at the hospital, I had to have a tetanus jab because the squirrel broke my skin,’ said Mr Felton

The gran-of-nine fed the animal since summer and it has made regular trips to her garden while looking for food and shelter.

‘He’s not a friendly-natured squirrel I am afraid,’ she said. ‘He is a rogue one and I am starting to wonder if he has got something going on inside his head like a tumour.

‘The speed of it is frightening, he dashes from the roof of my garden shed to me – but when he does it everyone else, he bites them.

‘It has even bit an elderly person in the area. On one occasion it chased a lad down the road and a dad was left with a bloody cut on his head.

‘Because it is a grey squirrel, you can’t release it – there are rules for it. Red squirrels are different.’

Others took to social media to share their experience on a Buckley local community page, with one revealing her cats had been attacked. 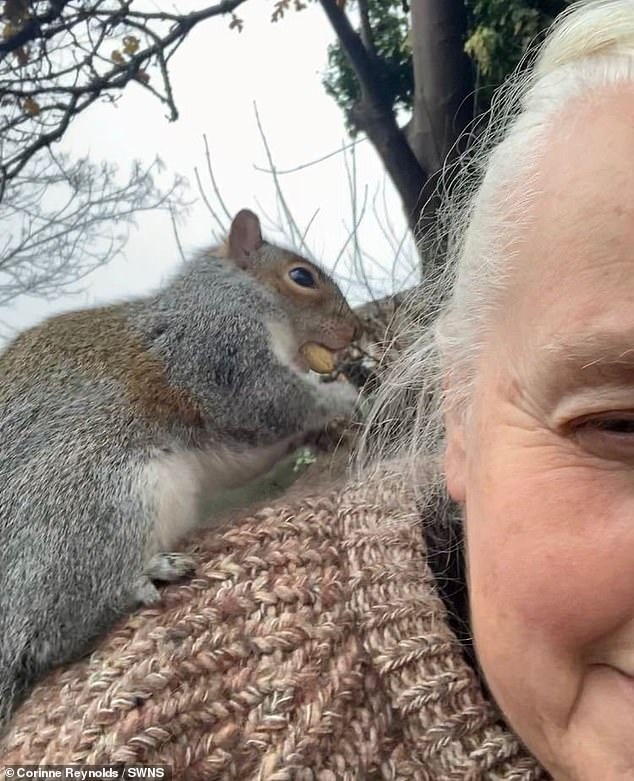 Corinne Reynolds, 65, pictured with the squirrel before it began terrorising residents of Buckley

She wrote: ‘Warning vicious squirrel that attacks, has bitten me, attacked my friend Kev when he came to my house and multiple other people.

‘I’m afraid it needs shooting and I’m an animal advocate, would never normally say that, but it’s also attacked my two Bengals who fear nothing and my neighbour’s Bengal cats… not fun.’

Grey squirrels were first introduced to the UK from North America in 1876 and now the Wildlife Life Trust estimates that there are 2.5 million grey squirrels in circulation in Britain.

Granite technician, Scott Felton, 34, was unaware of the creature causing chaos in his town until he was bitten on Boxing Day.

He said: ‘I was outside having a cigarette at my back door at the time. I crouched down and this squirrel came out of nowhere and jumped onto my garden table.

‘After that, it just jumped onto my arm and bit me on my hand before I even had chance to get it off – it all happened so quick.

‘My partner said I should go to the hospital to get it check out and, after some persuasion, I went.

‘After arriving at the hospital, I had to have a tetanus jab because the squirrel broke my skin. 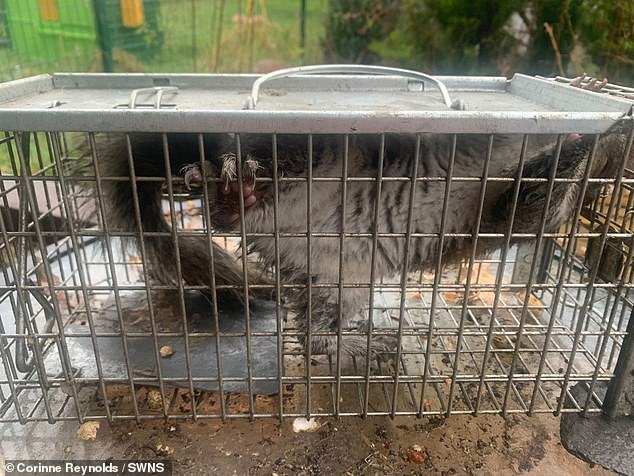 Caged up! The squirrel was finally caught in a human trap by Mrs Reynolds, who has handed the animal over to the RSPCA

‘I know of someone else too who had to have a tetanus jab because theirs didn’t stop bleeding.’

The squirrel – which has been nicknamed ‘Stripe’ by locals after the evil character from The Gremlins film – has since been collected by the RSPCA.

Mrs Reynolds said the people of Buckley were ‘now breathing a sigh of relief’ now they were safe again.

She added: ‘The handover was frightful. I had to transfer the squirrel from the cage to the RSPCA in my bathroom – we couldn’t risk it escaping outdoors again.

‘It was quite funny, we were on our knees in the bathroom on the floor trying to do the handover. It was the longest 15 minutes of my life.

‘He didn’t say what they we’re going to do with it – whether they are going to investigate or put it to sleep.

‘It has been quite a scary time for the area.

‘The amount of messages I have had from people offering to help has been quite amazing – they are grateful that I captured it. A lot a good has come out of this.’