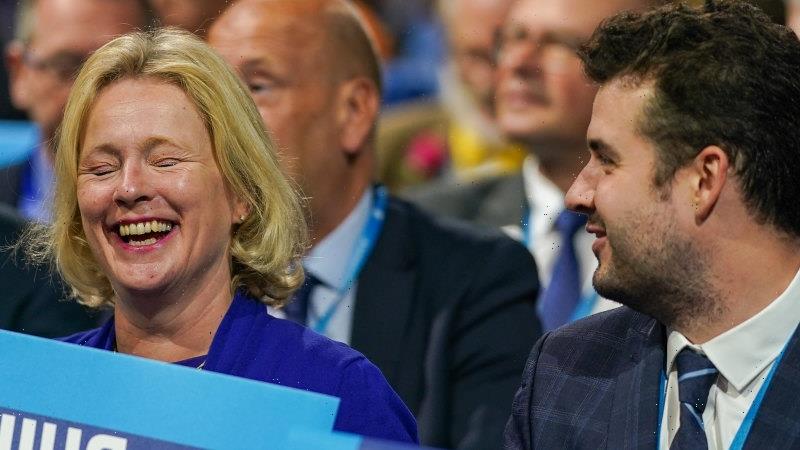 Manchester: It was vintage Boris Johnson. After an intellectually empty conference, the British Prime Minister took to the stage to celebrate with the party faithful the 2019 victory in which he sent the “corduroyed communist cosmonaut” Jeremy Corbyn “into orbit where he belonged”.

The gags kept coming. He lampooned his opposite number Keir Starmer as a “human weathervane, Starmer chameleon”, musing that if Columbus had listened to “captain hindsight”, “he’d be famous for having discovered Tenerife”. 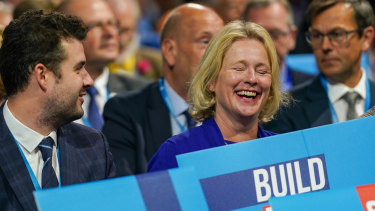 Delegates react as they wait to listen to Prime Minister Boris Johnson’s keynote speech during the Conservative Party conference in Manchester.Credit:Getty Images

With rhyme, he ridiculed Starmer’s Labour Party members for moving a motion against the new Australian, UK and US alliance AUKUS.

“I know that there has been a certain raucus squaukus from the anti-aukus caucus,” Johnson told his laughing crowd.

On pure performance terms, Johnson as jester did not disappoint.

“It was an excellent speech, really uplifting, very positive and encouraging for the country and for members of the party,” Jacob Rees-Mogg, the prominent Brexiteer backbench rebel, now Johnson cabinet minister told The Sydney Morning Herald and The Age.

But as the stage was dismantled and the lights went out at the Manchester Central Convention Complex the lingering concerns that many Tory MPs have started voicing only deepened. 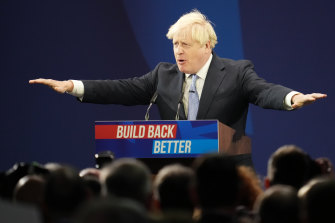 The legacy issues of the pandemic — exacerbated by Brexit — are beginning to build and when they bite, it could be savage for a Prime Minister’s who has never faced a proper opposition, something likely to change now that Starmer has reclaimed his party from the hard-left.

These include skyrocketing energy prices, food, labour and petrol shortages and tax rises all gathering speed as the country goes into its first winter living free of COVID-19 restrictions.

Remarkably, voters are not blaming Johnson for any of these problems — yet — but the government knows voters are terrified about what lies ahead.

Johnson’s tactic this week was to blame business for relying on cheap labour and urged voters to stay the “difficult course” he said was the Brexit dividend of a shift from a low-wage economy to a high-wage one that was no longer reliant on uncontrolled immigration. 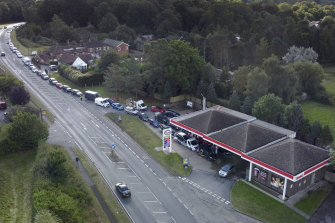 Motorists queue for fuel at a petrol station in Ashford, Kent, England, on Wednesday.Credit:AP

He breezily dismissed complaints from pig farmers of having to cull potentially 100,000 pigs because of a shortage of abattoir workers saying that they were going to die anyway and anyone who has eaten a bacon sandwich has eaten a dead pig.

His wife, Carrie, who has built her image as a millennial animal activist, is silent on her husband’s conflation of the huge animal welfare issues the farmers’ union says are raised by the wasted animal life and farming.

Johnson will find it harder to ignore the increasingly louder concerns of his backbench who are worried that a cost-of-living time bomb, combined with higher national insurance tax from next April, will be lethal at the ballot box.

“Margaret Thatcher would not have ignored the meteorite that has just crashed through the public finances,” Johnson said in his defence. 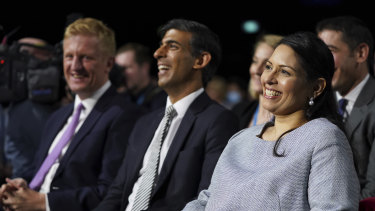 “Thatcher … was often unpopular at this stage … but she never worried about that because at year four the policies that she’d adopted had delivered their results,” former cabinet minister David Davis told a sideline event.

“If you pursue a policy today that is popular today but delivers results in two years time that are going to be disastrous, guess what the outcome’s going to be,” Davis warned singling out the national insurance tax hike and reversal of the cuts to corporation tax.

Johnson has achieved a marvel in British politics appealing to former Labour voters in the midlands and the north – beyond the so-called red wall – while retaining traditional Conservative voters in the south-east, the blue wall.

But for MPs anxious to see a plan that shows how the party can retain the north without losing the south, this year’s Conservative Party conference did nothing to allay their concerns.

“We’re all socialists now,” quipped Steve Baker, a lead Brexiteer, who used to head the influential ERG group of MPs but has turned his attention to fighting COVID-restrictions and for lower taxes since the pandemic.

“We are grinding miserably forward, doing Ed Miliband’s Labour Party’s policies, and we’re hating it every minute and trying to claim its conservatism and that really our hearts are somewhere else,” Baker told an event hosted by the Institute of Economic Affairs.

The next few months will be critical for Johnson. He has repeatedly refused to guarantee there will be no product shortages come Christmas, promising only that this year’s festive season will be better than the last. For context, last year, Johnson told millions to spend Christmas Day alone to help fight the pandemic.

The Prime Minister knows his cheer is alluring. He has a Trumpian ability to dodge what would end the careers of other MPs.

“It went through everything and explained how the economy is going to work,” Mogg said, denying the Prime Minister skirted around the hardship already being felt by Britons queuing up at dry petrol stations.

“It was brilliant,” Tyrese Romaine, a member from Birmingham agreed.

“In the future we’ll have to do what we can to bring taxes back down to keep with the core values of the party but at the moment I think he’s made the right decision,” he said.

In the future, Johnson will need more than just good jokes.