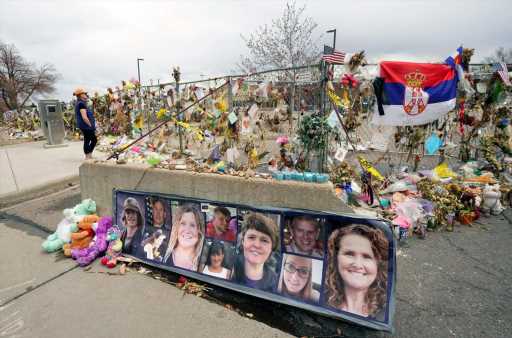 DENVER — Several families and survivors of those killed in the March mass shooting at a Colorado supermarket have demanded the appointment of a special master to help distribute public donations for victims to a centralized account. They say the nonprofit groups handling the funds are not being transparent about donations provided to victims.

Their campaign has reopened a debate that emerged after past mass shootings over how Americans can best help alleviate the anguish of personal and financial losses that survivors endure after their lives have been shattered by senseless violence — and how the administrative costs of fund gathering and administration play a role.

The groups giving out donated money to survivors of the 10 people killed March 22 at the King Soopers market — Community Foundation Boulder County and the Colorado Healing Fund — defend their work and dispute that the appointment of a special master is needed. They have raised a collective $5.86 million so far.

Boulder resident John Mackenzie, whose wife, Lynn Murray, was among those killed, announced that he and three other victims’ families and supporters have created a group called StandUpBolder to demand that government officials intervene and audit the handling of the donations.

They’re also asking that Kenneth Feinberg be appointed special master to design and administer the relief effort. Feinberg is a Washington, D.C.-based attorney who oversaw compensation programs after the 9/11 terror attacks, the Boston Marathon bombing, the Pulse nightclub massacre in Florida, the Aurora, Colorado movie theater attack and many other mass shootings.

“Millions are being collected because of this tragedy,” Mackenzie said in an interview. “There is no victims’ fund. You don’t treat people this way, especially people who are grieving the loss of their loved ones in the most horrific way I can imagine.”

His 62-year-old wife was shopping at King Soopers when she was killed, following a long career as a photo editor and photographer for magazines including Cosmopolitan and Vogue. She and Mackenzie had two children.

StandUpBolder has claimed that the Colorado Healing Fund, a nonprofit created in 2018 to help the public securely contribute to victims of mass casualty crimes in the state, is keeping 5% of donations for administrative costs.

StandUpBolder also said the healing fund is making spending decisions without victims’ input and plans to distribute some of the money to other nonprofits in the community.

Mackenzie’s group wants an audit of the fund, the Community Foundation Boulder County and other nonprofits that have solicited donations. He said he hoped other victims’ families would join the effort.

Jordan Finegan, executive director of the Colorado Healing Fund, said Tuesday the group has been very clear and open about charging a 5% administrative fee.

“Our focus is just to make sure that the best possible things are happening with these donations,” she said in an interview. About $700,000 in direct and indirect cash payments have been distributed through the group’s service providers, Finegan said.

Steve Siegel, a founding executive board member for the Colorado Healing Fund, also defended the group’s approach — saying the entire community was affected by the supermarket attack, not just the immediate families of those who were killed.

“It’s kind of like you throw a big rock in the middle of a pristine lake and it creates concentric circles,” he said. “That’s the way I see this world when you have mass tragedy. It doesn’t mean that you just divide the number by whoever falls into any of those concentric circles. It means you need to be ready for the demands or the needs that are placed upon a community in the aftermath of a major shooting.”

Feinberg, who spoke with Mackenzie this week, said that “in my way of thinking the best route is to divide the proceeds on a pro rata basis and that’s it.” The focus is on immediate victims and survivors, he said.

“There’s no reason to set up an administrative compensation system,” Feinberg said. “And all of this should be done pro bono, including a public audit afterwards. This much came in, this much came out.”

Siegel said it would be unwise to appoint Feinberg, whom he called a “spectacular man,” because the attorney “has an approach to things that is diametrically opposed to the way I see these things.”

If someone specifically designates a donation for a victim or purpose, that’s how the money will be spent, Siegel said. The donation would be sent to the Colorado Organization for Victim Assistance, another nonprofit group that makes the direct payments to victims. The Colorado Healing Fund’s bylaws as a nonprofit and a foundation prohibit it from directly sending checks.

Tatiana Hernandez, CEO of Community Foundation Boulder County, echoed Siegel’s belief that donations should be used as part of a “comprehensive and holistic” approach to healing the broader community after a mass shooting. Her group’s board just approved a $500,000 grant to be distributed directly to the families of the Boulder shooting victims.

“Donor intent is paramount to us, and I believe we were very clear with our donors that there was a broader lens that we were taking than simply immediate support for victims’ families,” she said.

Mackenzie said his group has launched an online petition to ask Gov. Jared Polis and Attorney General Phil Weiser an audit of the donations so far and to appoint Feinberg. After the 2012 Aurora mass shooting in which 12 people were killed, then-Colorado Gov. John Hickenlooper, now a U.S. senator, appointed Feinberg as special master after several families claimed a victims fund was being mismanaged.

The 21-year-old man charged in the supermarket attack faces multiple counts of murder and attempted murder. His defense team has suggested he suffers from mental illness, although they have not offered details.

“This isn’t about justice. Justice is returning my wife to me. That’s never going to happen,” Mackenzie said. “But where is the real compassion and humanity in all this? I’m being revictimized.”