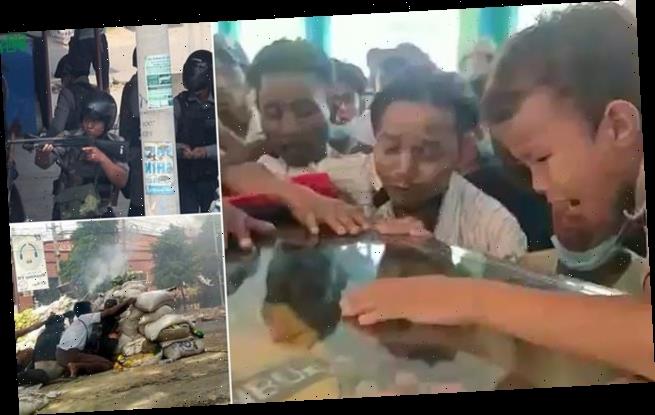 The death of a child’s innocence: Boy cries over coffin of his friend, 13, who was shot dead by Myanmar soldiers as they fled hand-in-hand from violence

As mourners wept over the senseless loss of a 13-year-old child’s life – shot dead by Myanmar military forces – no sight was more tragic than that of his heartbroken friend.

Tragic video footage has emerged of the boy crying over his playmate Sai Wai Yan’s coffin after he was shot dead on Saturday in Yangon, the country’s largest city.

The boy is so small that he was lifted up so that he could see his friend and lay his hand on the coffin before the schoolboy was buried on Sunday.

The pair had been playing together outside Sai Wai’s home in the Mingalar Taungnynt township when soldiers opened fire.

The two friends immediately ran together hand-in-hand from the violence but Sai Wai was shot in the head and fell down, according to Reuters. 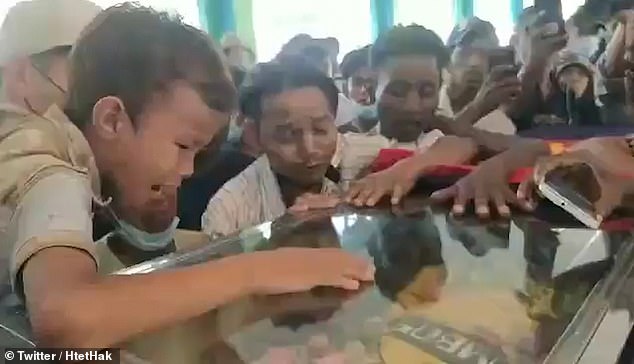 Tragic video footage has emerged of the child crying over his playmate Sai Wai Yan’s coffin after he was shot dead on Saturday in Yangon, the country’s largest city 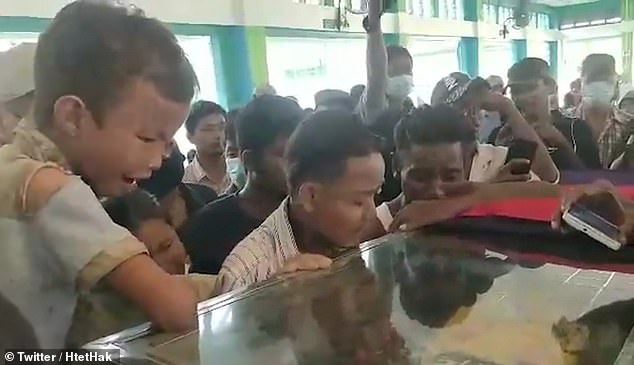 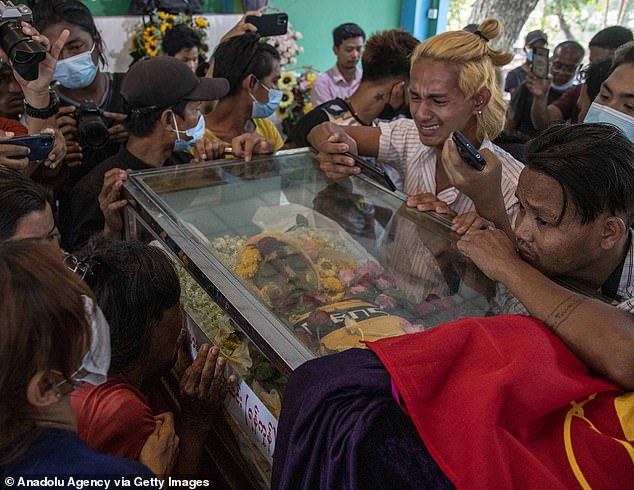 Barricades had been set up in the area and security forces opened fire, although there were no protests at the time, residents said. A neighbour said the military took away the boy’s body in a blue plastic sheet.

‘My hair was dyed by my friend [Sai Wai] two days before he died,’ the boy told local journalist Htet Arkar during the funeral. ‘He said Thingyan festival is coming soon and he dyed it for me.’

‘Are you leaving your mum behind? How can I live without you my son?’ his mother wailed beside his coffin on Sunday. Mourners flashed the three-finger as the boy’s coffin was moved.

Sai Wai was among at least 114 people who died on Saturday – the bloodiest day since the coup two months ago. 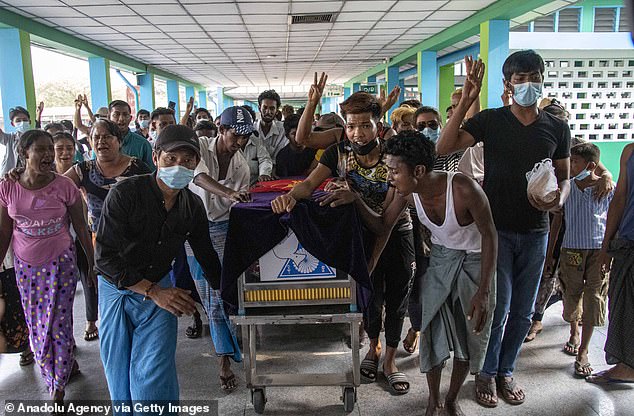 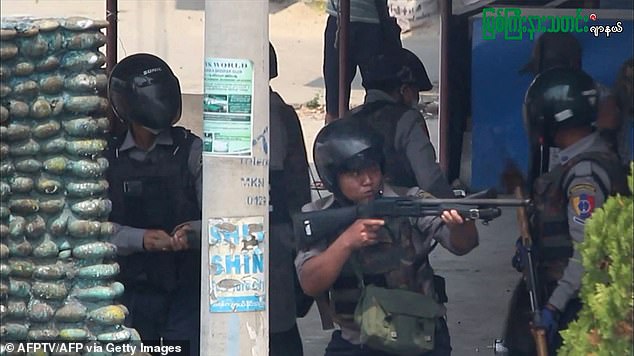 Soldiers and police have killed hundreds – including several children – in brutal suppression against weeks of mass protests demanding a restoration of democracy and the release of detained civilian leader Aung San Suu Kyi.

At least 114 more people were killed on Saturday, the United Nations said, as the regime staged a major show of might for Armed Forces Day – an annual parade showcasing Myanmar’s military prowess. 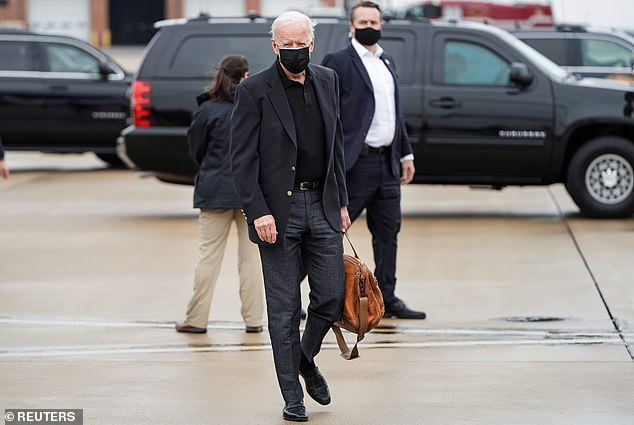 President Joe Biden (seen above walking toward reporters in Newcastle, Delaware on Sunday) condemned the military crackdown that left more than 100 people dead in Myanmar 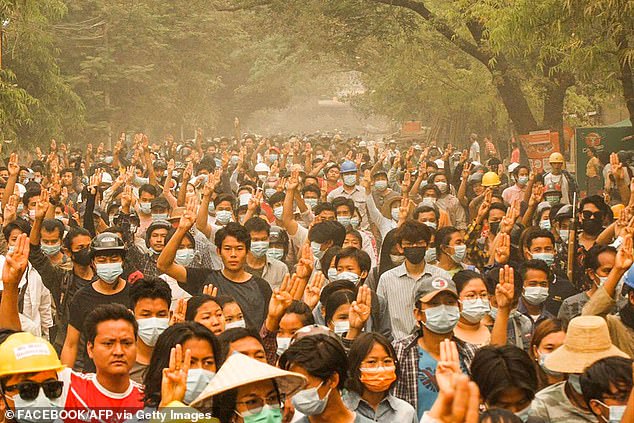 Protesters in Myanmar take to the streets to denounce the military coup in Monywa. The image was posted to Facebook by an anonymous source on Sunday 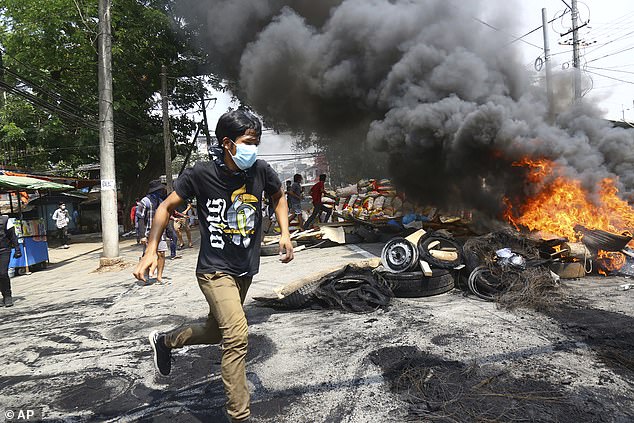 Anti-coup protesters run around their makeshift barricade they burn to make a defense line during a demonstration in Yangon, Myanmar on Sunday

‘It’s absolutely outrageous and based on the reporting I’ve gotten, an awful lot of people have been killed totally unnecessarily,’ Biden told reporters on Sunday.

European Union foreign policy chief Josep Borrell said the junta’s celebration of its armed forces had been blighted by ‘a day of horror and of shame’.

The latest chorus of international condemnation came after the defense chiefs of the United States, Britain, Japan and nine other countries denounced the Myanmar military.

‘A professional military follows international standards for conduct and is responsible for protecting – not harming – the people it serves,’ the rare joint statement said. 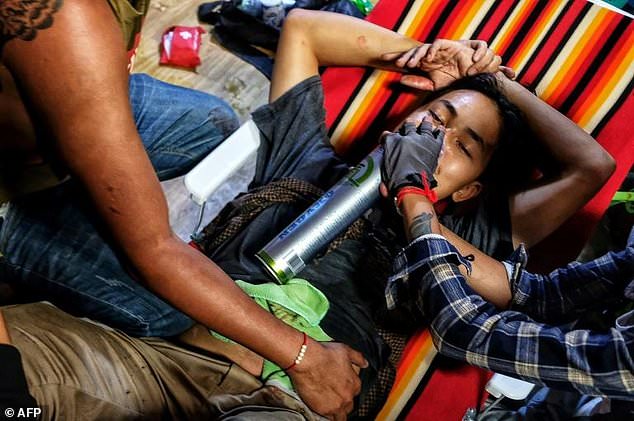 Soldiers and police have killed hundreds in brutal crackdowns against weeks of mass protests demanding a restoration of democracy. The image above shows an injured protester receiving oxygen on Sunday

The death toll from crackdowns since the February 1 coup has climbed to at least 459, according to the Assistance Association for Political Prisoners (AAPP) monitoring group.

AAPP said a further 13 people were killed on Sunday, as funerals were held for some of the victims, after the deadliest day of violence in the eight weeks since the coup.

In Mandalay, the country’s cultural capital, the family of Aye Ko mourned at a funeral service after he was killed overnight.

‘I am very saddened to lose my husband – together with my children I’m heartbroken,’ his wife Ma Khaing told AFP as she grieved with her four children.

On Monday the British foreign ministry advised its nationals in Myanmar to leave as soon as possible, following ‘a significant increase in the level of recent violence’.

Despite the dangers, protesters hit the streets again Sunday in parts of commercial hub Yangon and several other cities around Myanmar.

A 16-year-old boy lost his hand in one Yangon neighborhood while trying to lob back a grenade that security forces had thrown at protesters, a rescue worker said.

The UN put Saturday’s death toll at 114 people – including seven children — but expected it to rise further.

‘The shameful, cowardly, brutal actions of the military and police – who have been filmed shooting at protesters as they flee, and who have not even spared young children – must be halted immediately,’ United Nations envoys Alice Wairimu Nderitu and Michelle Bachelet said in a joint statement.

Military-run broadcaster Myawaddy TV gave Saturday’s death toll as 45 and said the crackdown was necessary because protesters had used guns and bombs against security forces. 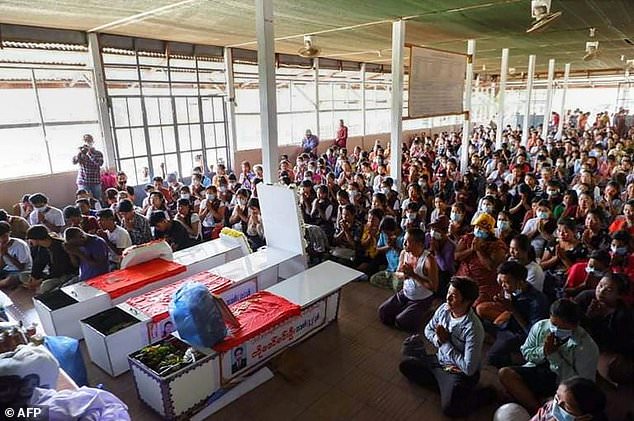 An insurgent group in eastern Myanmar’s Karen state said they had been targeted in air strikes late Saturday, hours after the ethnic armed group seized a military base.

It was the first air assault in 20 years in the state, and targeted the Karen National Union (KNU) – one of the country’s largest non-state armed groups.

But he also issued a threat to the anti-coup movement, warning that acts of ‘terrorism which can be harmful to state tranquillity and security’ were unacceptable.