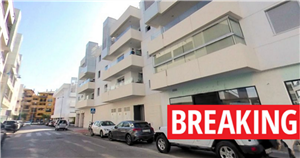 A British holidaymaker fighting for his life after plunging from a third-floor Costa del Sol tourist apartment had been binging on laughing gas and alcohol, police have said.

The 31-year-old suffered a severe head injury and damage to internal organs as well as multiple fractures in the fall, which happened at the Spanish holiday hotspot on Monday afternoon.

According to local reports, he tried to jump into the swimming pool below his third-floor balcony but missed the water and hit a sunshade before crashing to the ground.

The horror incident took place as the man partied with friends in San Pedro de Alcantara near Marbella, according to officers.

He was rushed to hospital in Malaga where he is now said to be in a critical condition and is now fighting for life.

Reports suggested medics spent more than 30 minutes attending to the British man at the scene following the fall.

A spokesman for Spain’s National Police said on Thursday: "The British 31-year-old who plunged from a holiday apartment in San Pedro had been partying with friends and consuming nitrous oxide and alcohol before throwing himself off the balcony according to the results of the investigation.

"The severe injuries he suffered led to him being admitted to an intensive care unit at a hospital in Malaga.

"The effects nitrous oxide have on peoples’ nervous system, including hallucinations and delirium linked to its consumption, could have caused this incident.

"Investigators have already established no-one pushed him and are not treating it as a crime."

Police revealed details of the hours leading up to the incident as they said a teenage girl described as a "minor" had been admitted to hospital in Marbella in a separate incident on Sunday.

Cops say she was rushed to the medical facility after consuming laughing gas and alcohol and jumping out of a moving car before throwing herself off a bridge.

She is said to have suffered "serious" injuries. Her age and nationality have not yet been made public.