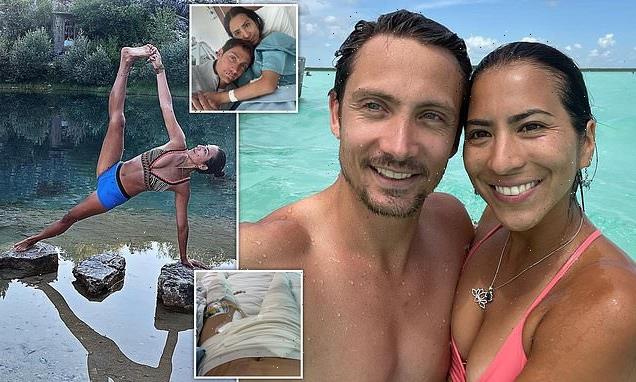 A British yoga instructor has miraculously survived horrific injuries caused by a boat propeller while on a luxury holiday in Mexico.

Amor Armitage, 37, was left fighting for her life after the near-fatal accident while on a diving trip with her husband Chase.

Last night she revealed medics told her that a ‘miracle’ two-inch blood clot in her artery prevented her from bleeding to death. She is now recovering in hospital on the Caribbean island of Cozumel, as Chase, 37, frantically tries to raise more than £60,000 to cover medical bills and fly Amor back to the UK.

The incident happened two weeks ago after Amor had flown out to Cozumel to link up with her stuntman husband of five years who had been away working on a US film set. After holidaying in Cozumel, the couple planned a further two weeks touring Florida before heading home to Basingstoke to see in the New Year. 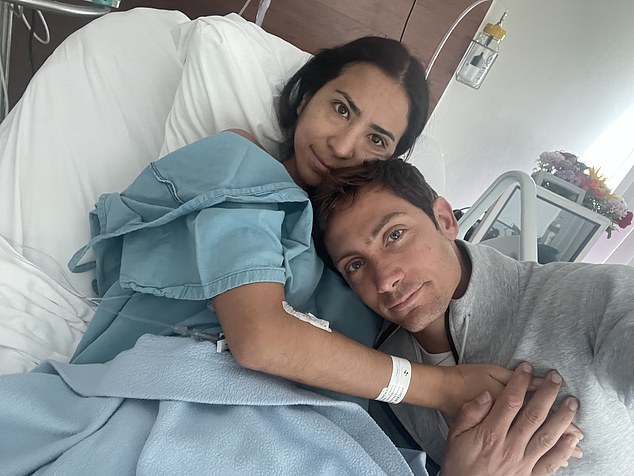 Amor Armitage, pictured in hospital in Mexico with her husband Chase, right, following her brush with death 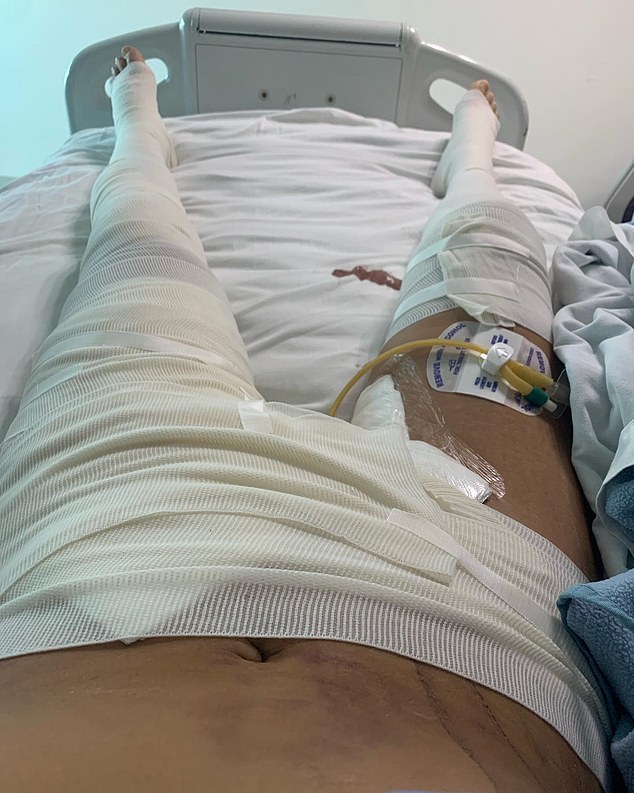 WARNING: GRAPHIC CONTENT In a gripping account of the incident, posted on her yoga website, Amor said the diving and snorkelling trip on December 17 to see stingrays, reef sharks and a giant sea turtle had been ‘truly magical’. But the dream trip quickly turned into a nightmare

In a gripping account of the incident, posted on her yoga website, Amor said the diving and snorkelling trip on December 17 to see stingrays, reef sharks and a giant sea turtle had been ‘truly magical’. But the dream trip quickly turned into a nightmare.

She wrote: ‘I felt a bit cold and decided to head to the boat to warm up. I swam to the boat’s ladder, there was music playing in the boat and the captain was not looking in my direction.

‘When I hold on to the ladder, I take out one fin, the captain doesn’t see me, I suddenly realise the boat has started moving and I’m unable to say anything, words just didn’t come out.

‘Everything seems to slow down as I feel the boat’s propeller hitting my abdomen, genitals and legs, my body feels heavy and I see the boat moving away from me.

‘Out of my gut comes a visceral scream, asking for help, the captain sees me but I know I have to swim towards the boat, so with cuts all over my body I managed to swim to the ladder once again.

‘He tells me I have to go up the ladder, I looked down and see my insides out, I feel there’s no chance I can pull myself up alone.’ 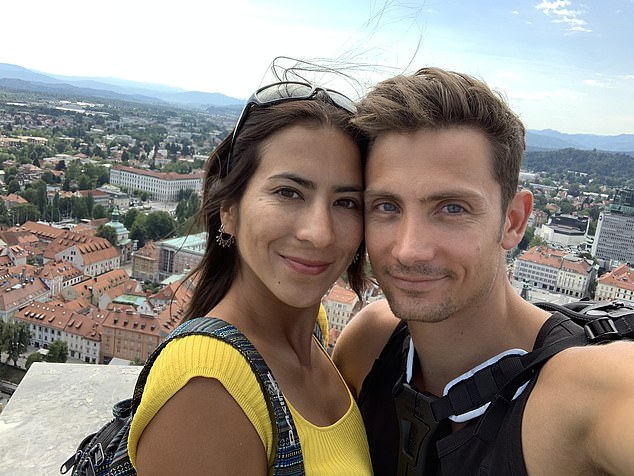 Amor said: ‘God must have been holding me’ as she managed to haul her broken body on to the deck.

She added: ‘My body feels mutilated and I feel a pain that is out of this world… Once I manage to pull myself up, the captain helps place my body on the floor and I start trembling, he calls the scuba team and Chase arrives.’

Amor said she feared she would die in that moment but the loving words from her husband kept her going. She added: ‘He did his best to keep me with him and I truly feel that if it wasn’t for my angel Chase, I would not be here today.’

Speaking from the hospital last night, Chase said he had been scuba diving eight metres underwater and resurfaced to hear his wife’s blood-curdling screams.

‘She was lying on the deck with her abdomen cut open. These were incredible wounds and I had no idea how she could survive them,’ he told The Mail on Sunday.

He added: ‘I just ditched the heavy scuba kit and held her tight as best I could. You hear people talk about soul mates, and Amor and I, we are those soul mates. We’re quite spiritual people, we feel closely connected.

‘I told her I wouldn’t let her go, that we had so much strength together, that the world needed her and it wasn’t time for her to leave. And that she had shown she was a miracle by staying alive.

‘But it wasn’t even about the words. The love we have is powerful enough. She also has a positive mindset and, despite the situation she faced, that helped her greatly.’ 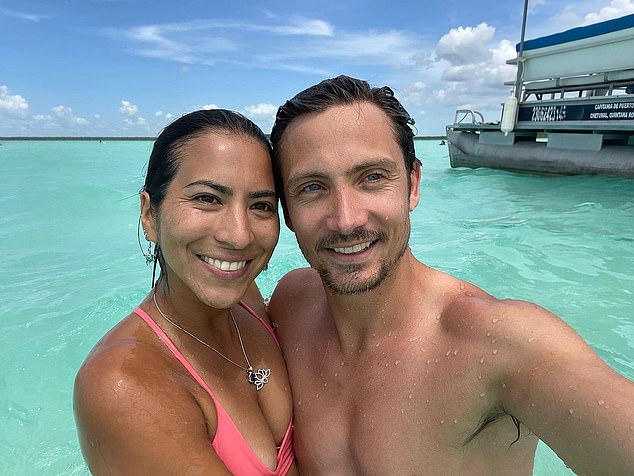 After being rushed ashore to an ambulance, Amor was taken to the intensive care unit at Cozumel International Hospital

After being rushed ashore to an ambulance, Amor was taken to the intensive care unit at Cozumel International Hospital.

There followed a four-hour operation to reconstruct and attach Amor’s bones and tendons. She also underwent surgery on her inner thigh which had been ‘completely scrambled’.

There was relief when it emerged the propeller had not sliced through any organs.

Amor said: ‘It seems that during the accident, I got a blood clot in my femoral artery which prevented me from losing too much blood both during transport to the hospital, and during surgery.

‘Without it, I would have lost a lot of blood.’

She went through a second operation to remove the blood clot and bypass the severed artery using a vein taken from her other leg.

Amor has also been having daily treatment in a hyperbaric chamber, which increases oxygen levels in her blood to help speed the healing process. Although she remains on painkilling drugs, and can’t properly move her left leg, some feeling has come back to Amor’s toes and there are hopes that she can make a full recovery.

Officials will carry out an internal investigation into the incident, according to a source at Cozumel’s Port Captaincy.

Now Chase has put his prized Porsche Spyder 981 sports car up for sale and is trying to raise further funds from online donations. The couple have said the hospital bills now exceed £60,000. 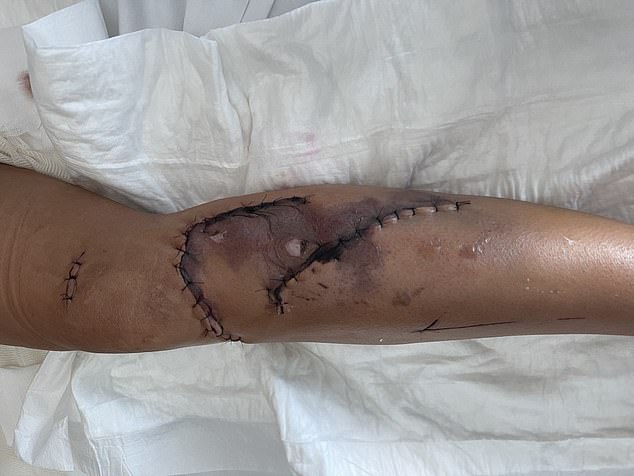 WARNING: GRAPHIC CONTENT There followed a four-hour operation to reconstruct and attach Amor’s bones and tendons. She also underwent surgery on her inner thigh which had been ‘completely scrambled’

The couple, who married in 2017, are popular on social media where they keep thousands of followers updated on their glamorous jet-setting lifestyle and wellness tips.

Chase, who made his name as a parkour street runner, has 75,000 Instagram followers. Amor, originally from Chile, runs a yoga studio in Hampshire and has 16,000 followers. In her blog, she thanked well-wishers for ‘messages, comments and audios of support from people who love me.’

She added: ‘I can now clearly see angels on Earth and I am so extremely grateful.’

Chase said the amount of support they have received from people online in recent days had been overwhelming, adding: ‘To be honest, our message to people isn’t: “How can you help us pay for all this?” We want to thank them for their prayers and support.

‘If Amor has a message then it is for us all to treasure each day and enjoy the present. Because that’s all we have.

‘And, of course, to be careful around big boats.’