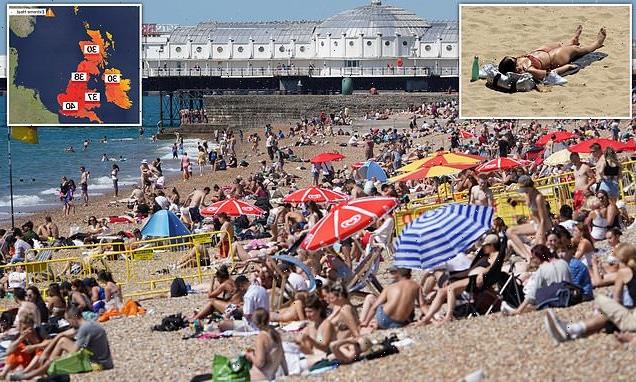 Britain goes into meltdown over 106F hottest day ever that is set to hit on Monday: Londoners are told not to travel AT ALL unless their journey is essential and health bosses warn ambulances could catch fire in queues outside hospitals

Britain is bracing itself for meltdown next week with predicted temperatures set to hit record-breaking highs of 106F sparking a raft of drastic measures from schools, travel bosses and health bosses.

The Met Office has said people’s lives could be at risk as it indicated it is likely that a new UK record temperature could be set on Monday and Tuesday.

Meteorologists gave an 80 per cent chance of the mercury topping the UK’s record temperature of 38.7C (101.7F) set in Cambridge in 2019, with the current heatwave set to peak on Tuesday.

Temperatures will climb over the weekend, and the Met Office has issued an amber warning for heat covering much of England and Wales from Sunday until Tuesday.

The ‘danger to life’ red warning for heat was issued for the first time but Government health officials yesterday insisted there was no reason for schools or workplaces to close.

Bosses have also shot down the idea of Britons working from home to protect themselves – but many will face major disruption on their commute, with Network Rail advising passengers to ‘only travel if absolutely necessary’.

Expected extreme temperatures have prompted Londoners to be urged against travelling on Monday and Tuesday.

Transport for London (TfL) is advising passengers to only travel for ‘essential journeys’.

The firm’s chief operating officer Andy Lord said: ‘Due to the exceptionally hot weather that is expected next week, customers should only use London’s transport network for essential journeys.

‘If customers do need to travel, they should check before they travel as we are expecting there to be some impact to Tube and rail services as a result of temporary speed restrictions we will need to introduce to keep everyone safe,’ he added.

‘It is also vital that customers always carry water at all times with them when travelling.’

Very hot temperatures can affect rails, overhead power lines and signalling equipment, with TfL saying it will work hard to keep as many services running as possible using ‘enhanced’ inspections to mitigate the impact of the extreme weather.

Track temperature checks will continue to be carried out regularly across the Tube and rail networks to ensure they remain safe and that the track is not at risk of bending or buckling, TfL said in a statement.

It added it was also inspecting the air conditioning units on the trains that cover 40% of the Tube network, the trains on the Elizabeth Line and London Overground as well as the air cooling units on double-deck buses to ensure they are functioning well.

TfL also has response teams standing by on its rail and road network to deal with any issues as they occur, with a particular focus on stalled trains and times, crowding and customer advice.

Ambulance trusts – already struggling to cope with demand – face a further 20 per cent rise in call-outs for heat-related illnesses.

NHS chiefs even warned ambulances may catch fire due to the ‘build-up of oxygen’ as they queue outside hospitals in sweltering heat.

Some hospitals have stood down routine outpatient appointments and surgery to reduce the risk to ‘frail’ patients travelling into hospital – and to free up capacity for extra emergency patients. 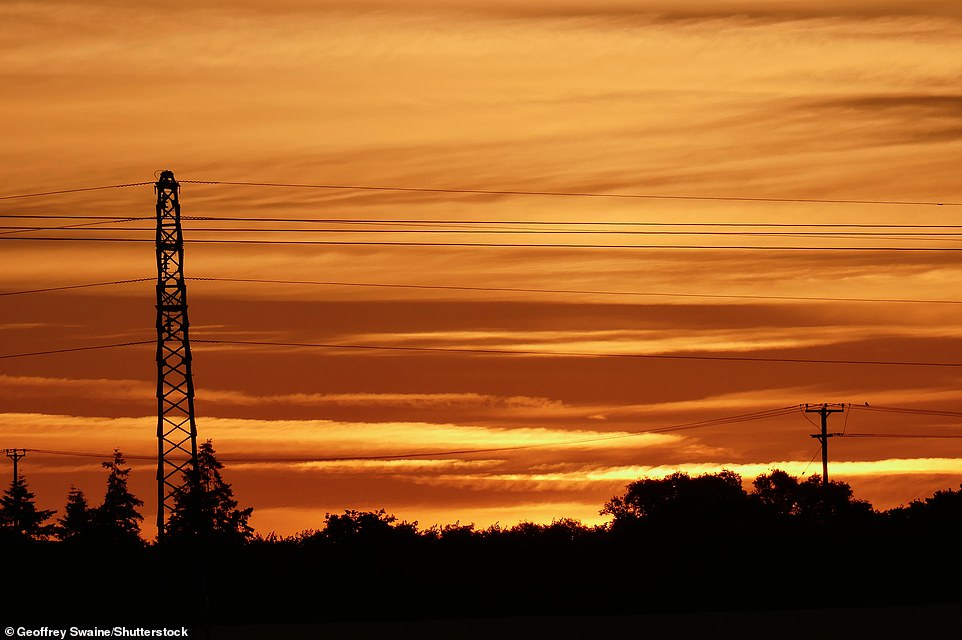 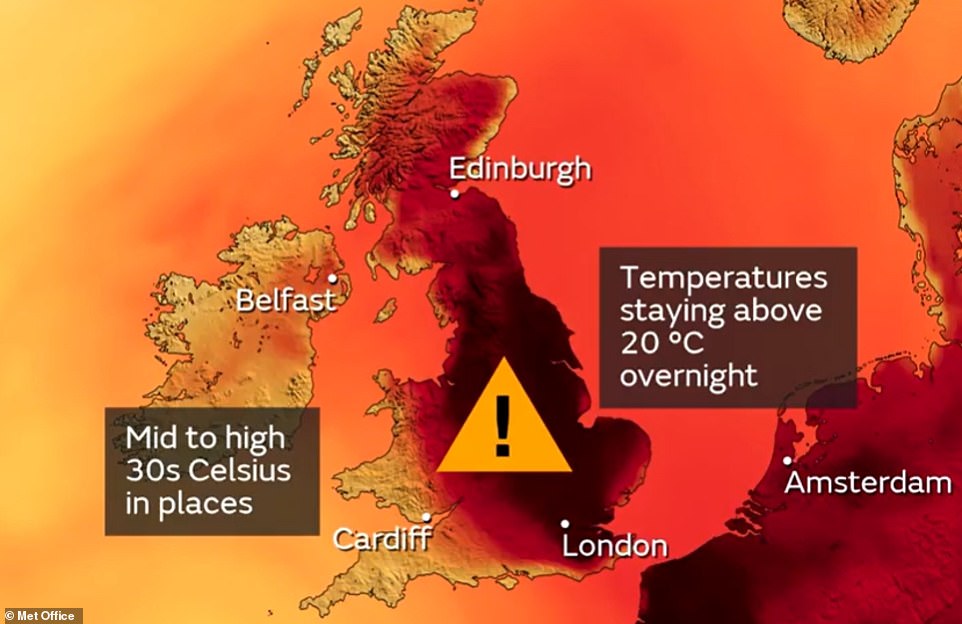 NEXT WEEK: The Met Office has issued this forecast map to accompany the extreme heat warning next Monday and Tuesday

Meanwhile, a number of schools have said they will close at the start of next week while others have altered the times of their school day and told pupils to come in wearing PE kit in a bid to make them more comfortable.

Saturday is set to start with overcast skies and scattered showers in northern areas, before turning dry across the nation as the extreme heat moves in.

Daytime temperatures on Saturday are predicted to be around 27C in London, 26C in Cardiff, 23C in Belfast and 21C in Edinburgh.

On Sunday, the mercury will rise to 30C in the capital, 27C in Cardiff, 24C in Belfast and 23C in Edinburgh.

Temperatures are forecast to increase by several more degrees across the nation on Tuesday – up to the mid-thirties for much of England and Wales.

There is a 50 per cent chance of temperatures reaching 40C somewhere in the UK, likely along the A1 corridor, with the Met Office issuing its first ever red warning for extreme heat. 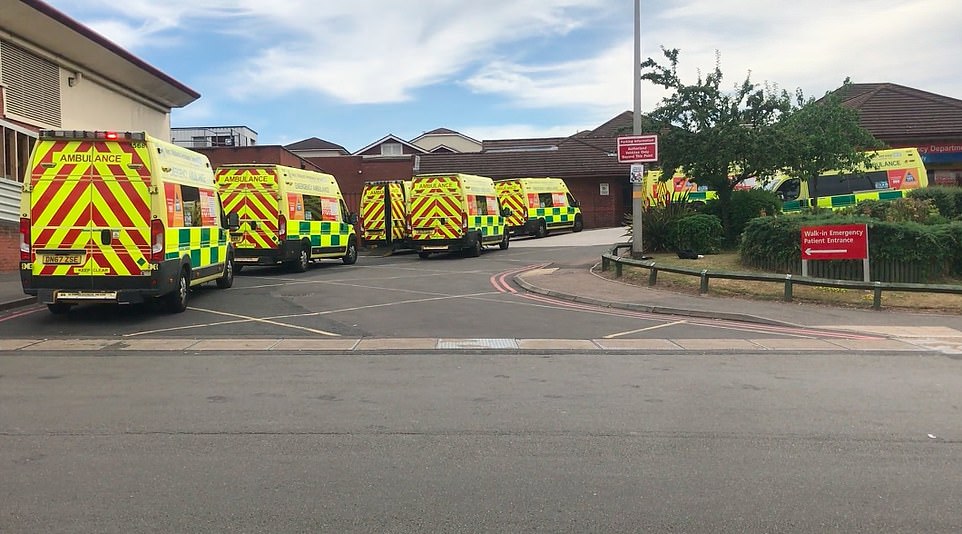 The UK Health Security Agency has increased its heat health warning from level three to level four – a ‘national emergency’.

Level four is reached ‘when a heatwave is so severe and/or prolonged that its effects extend outside the health and social care system… At this level, illness and death may occur among the fit and healthy, and not just in high-risk groups,’ it said.

A Met Office red warning, for Monday and Tuesday, covers an area from London up to Manchester, and up to the Vale of York.

Met Office spokesman Grahame Madge said: ‘If people have vulnerable relatives or neighbours, now is the time to make sure they’re putting suitable measures in place to be able to cope with the heat because if the forecast is as we think it will be in the red warning area, then people’s lives are at risk.

‘This is a very serious situation.’

A No 10 spokesman said railway speed restrictions may be needed on ‘some parts of the network next week to manage the hot weather and to avoid any potential damage’.

Jake Kelly, of Network Rail, warned that journeys will take ‘significantly longer and delays are likely as speed restrictions are introduced to keep passengers and railway staff safe’.

Train operators have warned passengers to avoid travelling on Monday and Tuesday unless their journey is ‘absolutely necessary’.

Some southern schools are also considering closing on these days – and the NEU teaching union issued a statement saying it would support headteachers taking this decision.

Downing Street said that Cobra met on Thursday amid the heatwave, and discussions with sectors including the NHS will ‘continue to work closely with all of those sectors over today, through the weekend and into early next week’.

Meanwhile, motorists have been advised to try to make their journeys outside of the hottest periods of the day, particularly if they have older cars.

North Wales Police said a paddleboarder died after getting into difficulty in the water off Conwy Morfa beach on Thursday evening.

Officers were called at 10.14pm and attended alongside the coastguard, RNLI and ambulance service, with two casualties taken to hospital in Bangor, where one of them, a 24-year-old woman, died.

In Wiltshire, Salisbury Plain caught fire again just 24 hours after an initial fire had been extinguished.

The military confirmed that four huge wildfires had been extinguished on Thursday but by last night, the fire was raging again and has now moved to a location where it cannot be tackled.

In a statement, the military said: ‘The impact area has reignited.

‘Unfortunately, it seems to be moving deeper into the range which means that we will be unable to tackle it.

‘It is being monitored to ensure it doesn’t make it out of the boundary.’

So far, approximately 2,000 acres (800 hectares) have been left severely charred by the fire.