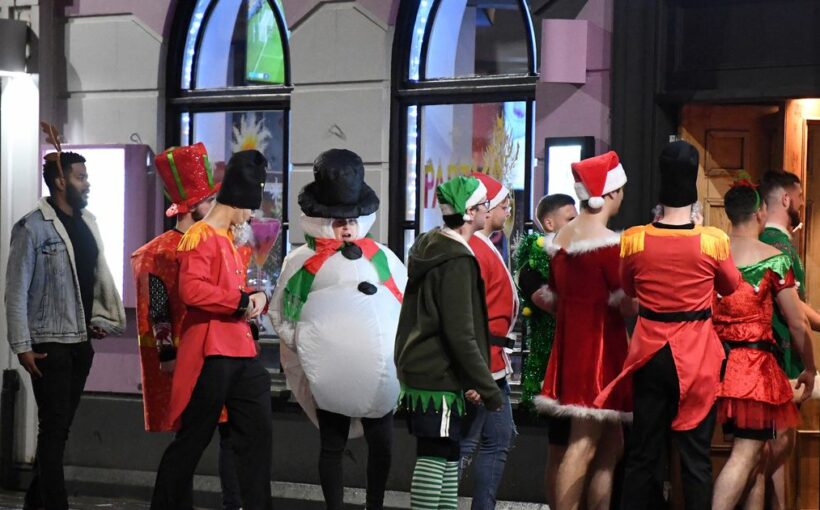 Boozy Brits enjoyed a last minute party before Plan B comes into effect as they were seen making the most of the final day of ‘freedom’ in true Christmas fashion.

Despite the introduction of Covid passes being introduced today, revellers didn’t seem to let that bother them with people using the last day to get dressed up in festive outfits.

Fears over the Omicron variant were put to one side in the city of Portsmouth became a hub of festive cheer as Brits turned up in seasonal costumes including Father Christmas, a Christmas tree and a snowman.

Astoria, a popular nightclub in the city, was hosting a themed night that saw hundreds of revellers queuing looking to gain entry.

Reports suggest that thousands up and down the country over the weekend had also been looking to get in some last minute festive partying before Plan B restrictions took full effect today.

The government are concerned over the rise of the new Omicron variant but that did not stop Brits from a big night out, despite it being highly contagious.

From today, if these revellers want to continue enjoying a nightclub, they will need to show they have had two vaccine doses or a negative test.

The rules also apply to other large venues where it is likely there will be crowds of people. Events that have more than 10,000 attendees, no matter whether unseated or seated, will also have to enforce the rules.

Prime Minister Boris Johnson announced ‘Plan B’ last week following fears of the rise of the Omicron variant. It is feared infections could reach one million a day by the end of December.

Along with the introduction of Covid passports, Prime Minister Boris Johnson also reinstated the directive to work from home if at all possible.

Health Secretary Sajid Javid also announced a further blow that will be introduced in the future with Covid passports needing to show more than the first two vaccine doses.

For the latest breaking news and stories from the Daily Star, sign up for our newsletter by clicking here.

Mr Javid confirmed to the House of Commons that adults will need to have had two vaccines and a booster jab to gain entry to places.

He said: "Once all adults have had a reasonable chance to get their booster jab, we intend to change this exemption [from showing an LFT for nightclub] to require a booster dose.”

This means no Brit will be classed as “fully vaccinated” until they have had their booster.