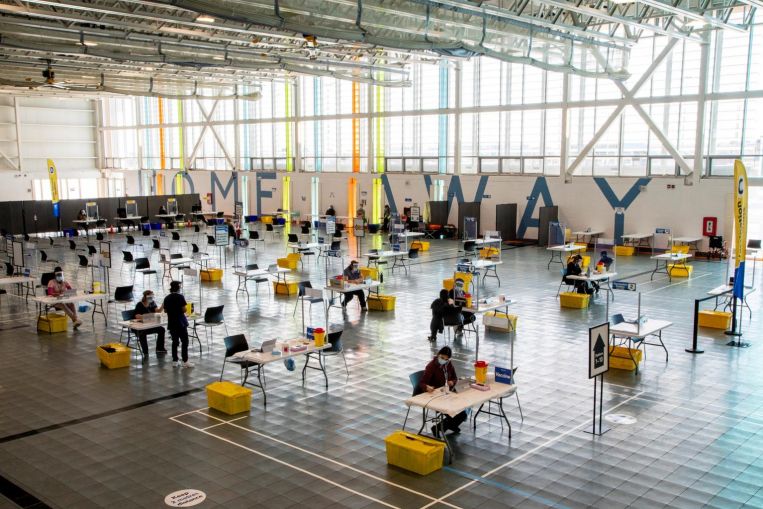 ONTARIO (BLOOMBERG) – Ontario declared a state of emergency, forcing most retail stores to operate under new restrictions, and said it would change its vaccine strategy in its fight against a new and more dangerous wave of Covid-19.

Canada’s largest province, home to more than 14.7 million people, issued a stay-at-home order starting April 8 at 12.01am Toronto time. Most categories of stores will be required to shut their doors, serving customers only through delivery or outdoor pickup. The order is in place for four weeks.

Even big-box retailers such as Walmart and Costco Wholesale, which were less affected by earlier restrictions from Premier Doug Ford’s government, will now be limited to selling only essential goods such as food, cleaning products and pharmacy items.

The province reported 3,215 new virus cases on Wednesday and is marching closer to the peak level reached in January during the pandemic’s second wave. New variants have been rising rapidly and vaccines have been slow to arrive: about 15 per cent of the the population has been given at least one dose compared to 33 per cent in the US, according to the Bloomberg Vaccine Tracker.

The result is a growing number of serious cases. The number of Covid-19 patients in intensive care units rose 25 per cent between March 28 and April 5, the provincial government said.

The biggest problem spots are Toronto and Peel, a suburban region to its west; the two zones accounted for 52 per cent of the new cases. Both regions have closed schools in recent days, sending students online.

Ford said his government will try to vaccinate teachers in those two regions more quickly, expand eligibility for vaccines in “high risk areas” and organise mobile teams to give shots in residential buildings and large employers.

Under the new rules, retail categories including car dealerships and telecom stores face new limits on what, how and when they can sell. Some will be allowed to provide service to customers in person, but by appointment only. Shopping malls will be largely closed, except for appointments and picking up items.

The main variant spreading in Ontario – first detected in Britain and known as B117 – is 50 per cent more lethal than previous strains, health officials have said.