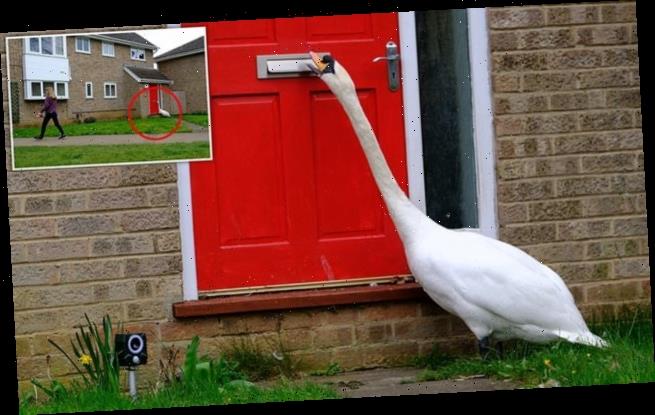 Neck, neck, who’s there? Cedric the ‘ASBO swan’ bangs on neighbours’ doors and rattles their letterboxes for up to THREE HOURS at a time

A swan has been plaguing a residential street by banging on doors and rattling letterboxes for up to three hours at a time.

‘ASBO swan’ Cedric rattles letterboxes on a row of houses opposite the lake where he lives in Northampton.

Footage shows the rogue bird using its beak to grab at letterboxes as a passerby says: ‘Oh my word, that poor family’.

The antisocial bird appears to be trying to get the attention of the occupants of the houses in expectation of a treat. 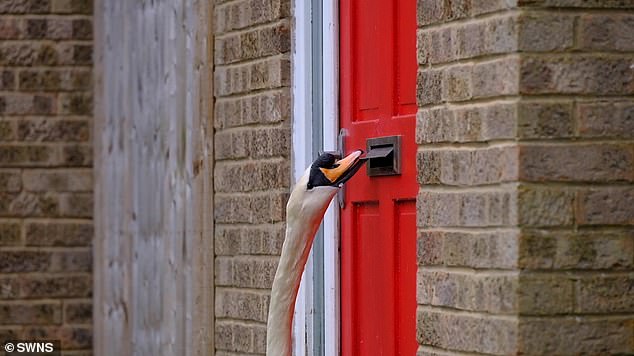 It has been targeting the houses for the last five years but no one knows the real reason it pokes its beak inside.

Grandfather-of-four Stephen Legg, 70, who lives in one of the homes, has tried and failed to deter the antisocial visitor on numerous occasions.

Mr Legg, a county councillor, said: ‘At the side of our houses there’s a small lake which was dug out 20 years ago for drainage.

‘The swan has been there for seven or eight years with its mate. Around this time of year five years ago the male swan started messing around my front door. 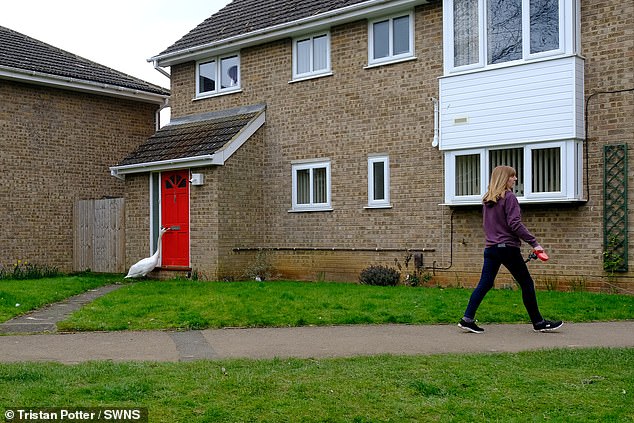 Grandfather-of-four Stephen Legg, 70, who lives in one of the homes, has tried and failed to deter the antisocial visitor on numerous occasions 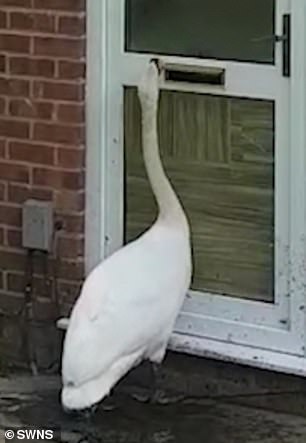 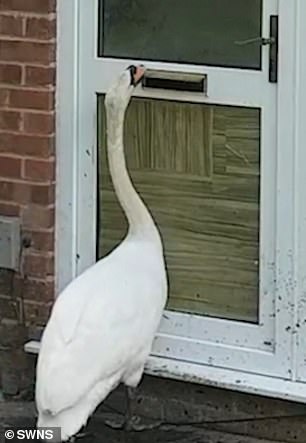 ‘It rattles the letterbox with its beak and stands in front of the glass.

‘The RSPCA have been a few times and reckon it’s trying to scrape insects off the glass, but there aren’t any inside the letter box.

‘He does it every year until the summer then doesn’t bother for the rest of the year. It is a flipping nuisance. He starts by rattling the letter box then bashes the metal with its beak quite loudly.

‘The racket reverberates through the whole house. It doesn’t do any damage, but it’s extremely irritating.

‘Sometimes it does it for three hours at a time, other times only once or twice. It really is very loud because it flips the letter box up and down with its beak.

‘I have been very careful not to feed it and certainly don’t feed it through the letter box.’ 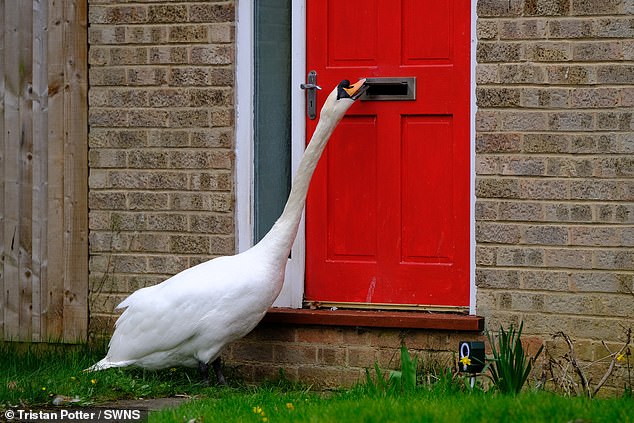 He said the bird couldn’t possibly be hungry because it is constantly fed by walkers.

‘Everyone who walks past the lake seems to give the swans something to eat,’ he added. ‘They must be the best-fed birds in England. The last thing it could be is hungry.

‘It is impossible to work out what it’s up to and it does it to other houses. But it certainly gives the postman and paper boy something to think about.’

Nothing will stop the bird’s obsession with letterboxes. Not even a swan-repellent ultrasonic noise.

Mr Legg added: ‘I did have a device that makes a swan-repellent ultrasonic noise, but it actually seemed to quite like it.

‘He just nestled up to it, so it did no good at all and even might’ve encouraged him. It cost me thirty quid so it was a complete waste of money.

‘I did try covering the whole door but I didn’t get any post for a whole month.

‘If it keeps on through the whole summer I will have to cover the door again and leave my conservatory window open for the postman.

‘It is a bloody nuisance and very peculiar behaviour.’ 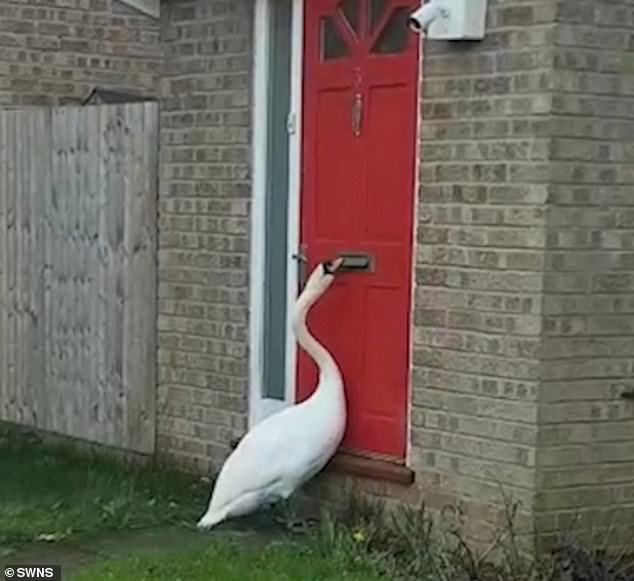 Retired nurse Wendy Howard, 63, who also lives nearby, captured the hilarious footage after seeing the swan on her daily walk

Mystery surrounds why the pesky bird keeps knocking on people’s front doors but it is believed it could be territorial behaviour or he is looking for food.

Retired nurse Wendy Howard, 63, who also lives nearby, captured the hilarious footage after seeing the swan on her daily walk.

The married mother-of-two said: ‘The swan has been been doing it almost every day recently and I still think it is pretty funny to see when walking past.

‘But I’m glad it isn’t my house because it is very noisy, it would depend on how early it started.

‘It’s like a postman opening the letterbox to drop the post through. It puts its beak through their letter boxes, raps the metal and carries on and on.

‘The videos are only short but it keeps banging and banging on the door.

‘It happened about the same time last year and I think they could be hungry in nesting season.

‘At first I couldn’t believe what was happening but I’ve got used to it now. Thousands of people have viewed the videos on social media now, it’s gone crazy. I’ve had emails from New Zealand from people who have seen it.

‘I never thought it would come to this after filming it on my six-year-old iPhone but anything light-hearted that brings a smile to people is a good thing at the moment.’