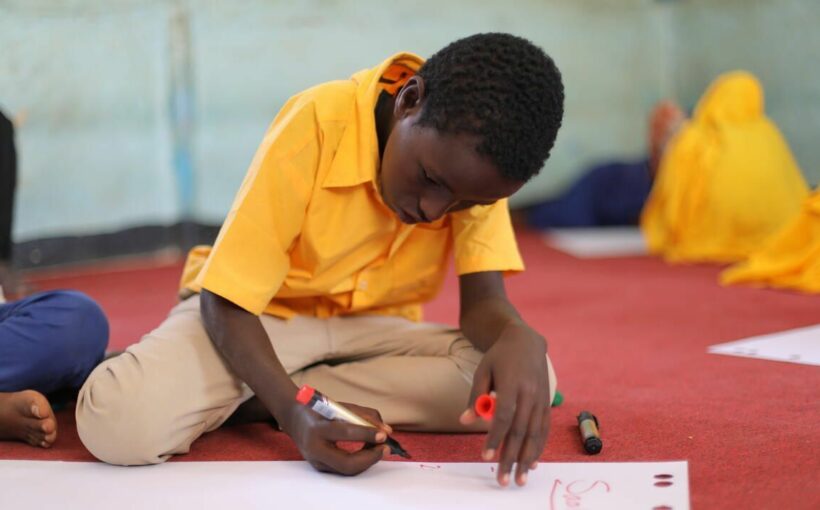 And some 1.8 million children are thought to be at risk of malnutrition, according to the United Nations.

Somalia’s drought is the worst in 40 years, after a fifth failed rainy season.

The six children, aged 12 to 15, described how deadly diseases were spreading and youngsters were being forced out of education.

They wrote: “The shortage of food has also caused children not to be able to go to school. If they go to school, they are not able to understand the lessons well or see properly.

“Some Somali children are not even in a position to leave their homes. They are affected by polio, diarrhoea or vomiting, which are all caused by malnutrition.”

The children – Adam, 12; Salma, Najama and Nastex, all 13; Ali, 14; and Ladan, 15 – said the climate was “getting worse day by day” and they dream of a future free of devastating dry spells.

Appealing for world leaders to find solutions, the letter added: “If you haven’t eaten, it’s hard to understand anything. If your family have no food to give you, you’re not able to play, run or concentrate.

“We want you, as world leaders, to show commitment and find a solution to the recurring droughts so that Somali children can go back to school.

“We are asking that pollution be curbed and controlled. And the release of harmful smoke be monitored. Droughts should be controlled, and Somali children should not be forgotten.”

Save the Children, which shared the letter, urged world leaders to heed the desperate call to arms.

Claire Sanford, the charity’s deputy humanitarian director, said: “These children are bearing witness to the heart-breaking impact that climate induced hunger is having on the most vulnerable in their community.

“They understand better than anyone the dire situation facing families in Somalia. Malnutrition and death rates are soaring, children are too hungry to leave their homes, they cannot concentrate, play, or go to school.”

Ms Sanford said Britain had helped to avert a catastrophe in the Horn of Africa during another severe drought in 2017.

She added: “Save the Children is calling on the UK to keep the voices and rights of Somali children front of mind and act on this open letter.

“An urgent investment of £70 million could help treat one million acutely malnourished children.

“It could also bring together experts to address the barriers stopping treatment from reaching children and tackling the root causes of this crisis.”

Minister for Development Andrew Mitchell said: “Somalia faces one of the worst humanitarian crises in the world, with millions of people in desperate need of aid, including over half a million children under five years old who are at risk of death.

“I visited Somalia in 2011 at the height of famine and I was appalled by the loss of life.

“The UK is committed to providing urgent support to the most vulnerable who are in the most desperate need. But we cannot act alone.

“The international community needs to do all it can to stop famine, and also to help the country be better prepared for such disasters in the future.”