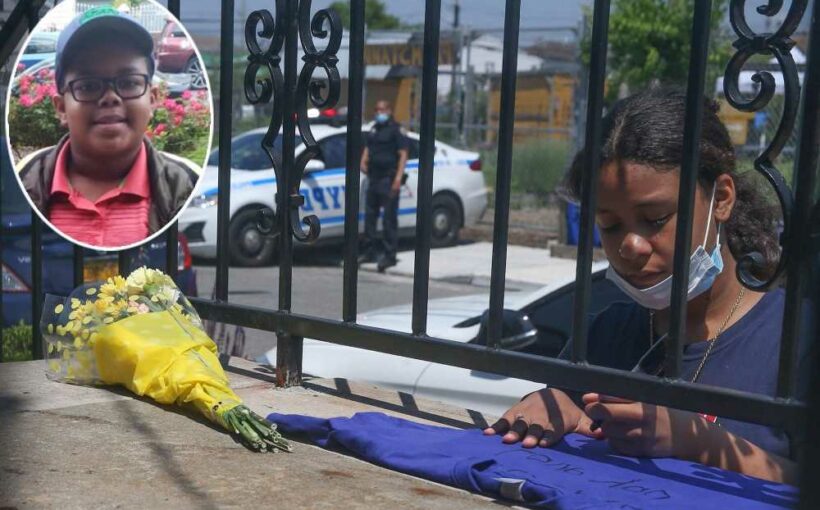 Distraught classmates of the 10-year-old Queens boy shot dead in a driveway dispute are planning a touching tribute to him at the slay scene Tuesday — to mark what would have been his 11th birthday.

The kids will release balloons and place candles in front of the Far Rockaway home were Justin Wallace took a fatal bullet Saturday evening amid a long-simmering dispute between his relatives and their neighbors over a shared driveway.

“Every time I think about it, my stomach hurts,’’ Aliza Rivera, 11, told The Post on Monday of the heinous crime.

Aliza spoke while standing next to her mom outside the Beach 45th Street home — where they laid a purple T-shirt signed by people who knew the murdered boy on a landing still drenched in his blood.

“We were planning stuff for summer, to go out, have fun,’’ she said of her friends group and Justin.

“When I look and see his blood all over the floor, I just think, how?”

Cops are still hunting for the boy’s killer, who was caught on surveillance video reaching through the home’s wrought-iron fence and firing eight bullets at its front doorway, killing Justin and wounding his 29-year-old cousin.

Police spent part of Monday plastering the neighborhood with posters featuring a smiling photo of Justin and offering up to $10,000 for information on the shooting.

“I have six kids. I stay in the house,’’ Aliza’s mother, Emily Rivera, 29, told The Post when asked about city crime — including a recent terrifying uptick in shootings. “The life we’re living in right now?”

Aliza noted sadly, “We were at the school today, making plans for next Friday, after graduation.

“They asked us to bring this shirt here,’’ she said of her and Justin’s school in the neighborhood, Challenge Prep.

“I was with him on [June 1] ’cause it was Autograph Day, the yearbook, we’re getting set to graduate,” the girl said of Justin, who was also a fifth-grader.

“We were at the park playing. And we were playing tag. We were supposed to hang out again on his birthday.

“Me and our friends are going to be here tomorrow, ’cause his birthday is tomorrow,” she said. “Some of the classmates are going to come and put candles, and we’re going to release balloons.

“Me and my friends we were all on the phone, and we were just crying and just talking about him,’’ Aliza said of her slain buddy.

“My friend … she was with him on Saturday. She went to the beach with him. She was saying, ‘How come I get to leave, and nothing happens to me?’”