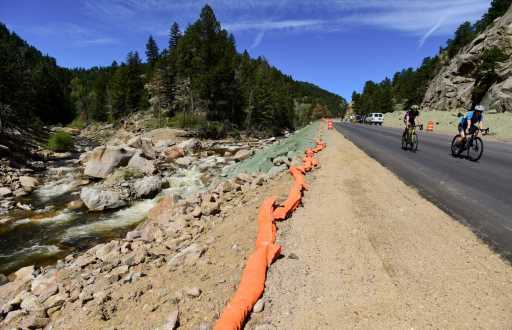 A gravel pull-off on Colo. 7 in the South St. Vrain Canyon became a place of celebration Thursday.

At a lectern set up along the roadside, five miles west of Hall Ranch trail head, CDOT Executive Director Shoshana Lew shared the good news with a crowd of roughly 20 people. After being closed for 2013 flood damage repairs, Colo. 7 will reopen to motorists at noon Friday.

Work on the highway is nearly complete, with construction between mile markers 23.3 to 29.6 expected to wrap up in November. Once finished, Colo. 7 will mark the state’s final flood recovery project.

The road will remain closed to bicyclists until final construction is finished, and some single-lane closures can still be expected as partners wrap up final work on Colo. 7.

While some minor elements of the road are still in the process of being repaired, Lew illustrated just how much progress has been made. She described the damage that the road from Lyons to Estes Park endured nine years ago in the flood.

Mass amounts of debris, rock and sediment carried by floodwaters filled the South St. Vrain Creek, which runs along the highway. This altered the course of the creek, causing even more damage to the highway.

Heather Paddock, CDOT regional transportation director, said at least nine miles of the highway became severely damaged or lost. In some places, it was hard to tell a road had been there at all.

Paddock said the 2013 flood impacted more than 400 miles of roadways and more than 120 bridges and structures — leading to a $750 million flood recovery program. Repairs to Colo. 7 cost roughly $60 million.

As far as work that still needs to be completed, Paddock said crews will next repair a retaining wall, put down a final layer of asphalt and finish planting seeds for vegetation.

Lyons Mayor Hollie Rogin, who attended the Thursday celebration, told the Times-Call that she was grateful to CDOT, the U.S. Forest Service, the Federal Highway Administration and everyone else who partnered to repair the highway.

“We’re also grateful to our residents and neighbors up the canyon for their patience during this process,” she said.

Lyons is working to complete its final 2013 flood recovery project, a pedestrian bridge at Fourth Avenue. The town hopes to finish that work in August.

Boulder County Commissioner Marta Loachamin said Lyons residents and those who live in the canyon were already greatly impacted by the flood.

“Then adding traffic and adding a commute change, those pieces can be a frustration,” Loachamin told the Times-Call. “We’re thankful that they were patient while we tried to get this done as quickly as possible.”

Emergency repairs allowed Colo. 7 to open about 2½ months after the flood. But construction work on permanent repairs didn’t begin until after Labor Day of 2021. The road was open only during set hours, from 6 to 8 a.m. and 4 to 7 p.m.

CDOT led a van tour of the road Thursday, and gave cyclists the chance to pedal along Colo. 7 and take in sites of the canyon.

Construction workers with Kiewit Infrastructure Co. put more than 30,000 hours into repairing the roadway, according to Jason Hagerty, Kiewit project sponsor. Other partners involved in the project include the U.S. Fish and Wildlife Service, FEMA and the Colorado Office of Emergency Management.

Paddock said CDOT earmarked Colo. 7 as one of its final flood recovery projects, because it has one of the lower volumes of people traveling along the corridor, compared to other roads that needed repair.

Paddock said partners worked hard to get the road reopened in time for the Memorial Day holiday.

“Who is going to benefit the most? The community, the people who live here, as well as this is a huge recreational corridor,” Paddock said. “This is a heavy cycled corridor for Boulder County, as well as all the fly fisherman.”