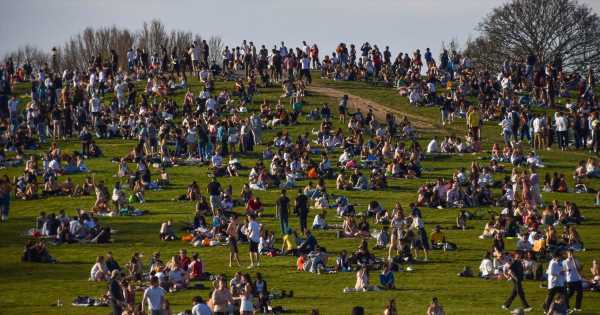 Police have warned crowds in parks will be broken up as Brits try to enjoy the heatwave and the easing of lockdown rules.

The hot weather, which saw yesterday being crowned as the hottest day in March for more than 50 years, lead to parks and coastlines being filled with Brits eager to enjoy the sunshine.

Mercury across parts of the UK rose by more than 20C in less than four hours, and St James's Park in London reached 24.2C, the hottest recorded in March since 1968, writes The Telegraph.

In Leeds, large crowds of sunbathers arrived in Woodhouse Moor, with police warning dispersal orders and fines would be issued to prevent groups breaching lockdown rules currently in place.

West Yorkshire Police said: "We continue to be in our communities, engaging and explaining and encouraging people to follow the new restrictions.

"We would like to remind people that we are still in a pandemic and will disperse groups of over six – using fines where appropriate to do so."

In Nottingham, council officials declared alcohol would be seized from people entering parks for the rest of the week.

It comes after footage emerged of people brawling, littering and breaching social distancing in Arboretum on Monday.

Nottingham City Councillor Rebecca Langton said: "It is absolutely unacceptable to put our key workers at additional risk – from CPOs to cleansing teams left to clear the mess, not to mention the complete disregard for public safety or the law."

Brits flocked to the coast, including Cornwall and Devon, where people headed towards the sea to make the most of loosened lockdown rules.

As of Monday, groups of up to six or two households are now permitted to socialise in parks and gardens.

The heatwave is set to continue on Wednesday, with the Met Office predicting highs of 25C to hit the UK.

Temperatures could soar above 25.6C today, the current record for March, which forecasters say is 'possible'.

But the sunny skies are expected to take a deep plunge to a cold contrast by Easter weekend.

Met Office forecaster Alex Burkill said: "It (the temperature) is exceptionally high for the time of year.

"It's the second warmest March day on record.

"Temperatures could be a touch higher tomorrow than they were today.

"It's not out of the question, but I'm not expecting it to. It's a possibility."