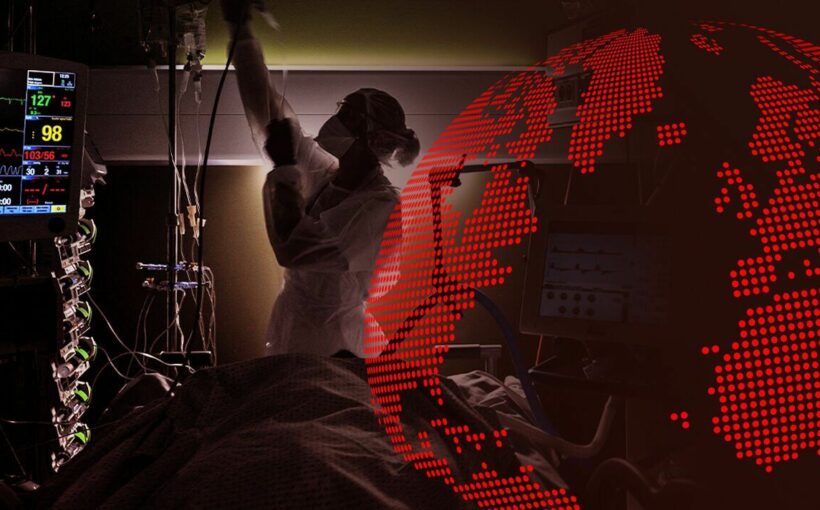 Healthcare spending is at record-high levels across the Western world, yet systems are struggling to cope. The combined effects of the pandemic and a rapidly ageing population are stressing hospitals, ambulance crews and social care services to their limit. Excess deaths – those beyond usual numbers – are consequently soaring: the crisis is global.

In the struggle to improve pay and working conditions amid the cost-of-living crisis, staff from across the NHS from nurses and midwives to ambulance workers and call handlers have staged multiple rounds of walk-outs.

Over 4,000 people a day are having to wait over 12 hours to receive treatment in emergency departments, as more than seven million people are on a hospital waiting list in England alone.

According to the Office for National Statistics (ONS), the number of weekly deaths in England and Wales was up 19.5 percent on the 5-year average during the week to January 13.

Excess deaths are the plainest and most harrowing metric of a healthcare crisis, and figures from around the world show the UK is not alone.

Healthcare worker recruitment has been a recognised difficulty for many years. According to the World Health Organisation (WHO) countries at all stages of development experienced healthcare worker shortages in recent years.

Limited progress in the area was squashed by the pandemic, during which the challenges of “burnout, mental health, well-being and workplace violence were exacerbated on top of the persistent high risk of exposure to infection and death,” the public health agency said.

As a delayed consequence of two years of lockdown, flu and flu hospitalisation rates are especially high this winter. Doctors and surgeons are also still struggling to bear down on the backlog of elective care due to coronavirus cancellations over the past few years.

Health, safety and dietary progress around the world are in fact posing another major problem for healthcare systems: the population is living far longer. The number of persons aged 80 years or older is expected to triple between 2020 and 2050 to reach 426 million, according to the WHO.

These factors combined contribute in large part to the huge numbers of excess deaths recorded in the Western world of late. The latest data from Eurostat – the EU’s statistical agency – show excess deaths on the Continent hit almost seven percent in November.

READ MORE: Not eating breakfast until 11am could add 20 years to your lifespan

Throughout 2020, excess mortality was almost largely consistent with the number of reported coronavirus deaths – and this remained the case in 2021. However, in 2022, such fatalities accounted for under half of overall excess mortality.

In Germany – whose healthcare was ranked 15th-best in the world by the Legatum Institute Foundation (LIF) in 2021 – excess mortality reached 15.6 percent in November, according to Eurostat.

A total of 35,000 care sector posts were reportedly left vacant in the country last year – 40 percent more than a decade ago – while a report last summer claimed more than a third of all health-related jobs could be unfilled by 2035.

Across the pond, the staffing crisis also looms large in Canada. In early December, a children’s hospital in the capital of Ottawa was forced to call in the Red Cross to help it through a surge in respiratory viruses.

The same month, Canada’s provincial premiers called for a meeting with prime minister Justin Trudeau to renew their request to raise the federal healthcare contribution from 22 percent to 35 percent.

The country’s excess death rate was found to be almost one-and-a-half times higher in 2022 than during the height of the pandemic in 2020 and 2021.

Switzerland’s universal healthcare is often cited as among the best in the world – the Swiss system ranking 12th according to the LIF – yet it too is facing unprecedented pressures.

In early January, the co-president of the Swiss Society of Emergency Medicine warned of a profound crisis in hospital emergency rooms. Experts have called 2022 a “historic year” as mortality was revealed to be ten percent higher than the Swiss Federal Statistical Office’s baseline estimate.

In France, there are now reportedly fewer doctors than a decade ago in 2012. Over six million people in the country – including 600,000 with chronic illnesses – do not have a regular GP while just under a third of the population lacks proper access to health services.

Nearly 15 million excess deaths from any cause are thought to have occurred during 2020 and 2021, according to new WHO research – nearly three times the 5.42 million coronavirus fatalities reported over the same period. Health statistician William Msemburi said the figure was also likely especially high due to people dying from delayed health screenings and medical procedures.

The WHO’s European office last year claimed: “All countries of the region face severe problems related to their health and care workforce.” The problem is only set to get worse as the body’s most recent analysis found that 13 of the 44 countries had a workforce in which 40 percent of medical doctors are already aged 55 years or older.

Aside from dispensing with cumbersome coronavirus isolation practices, experts believe the solution lies in increasing funding, whatever the cost. Pay for doctors and nurses must match that in rival sectors of the economy, and healthcare spending as a share of GDP must rise in turn to accommodate ageing populations.

In the UK, while NHS funding as a proportion of GDP rose from 5.5 percent to eight percent between 2000 and 2010, the health service allocation stagnated throughout the decade leading up to the pandemic, sinking slightly to 7.8 percent in 2019.