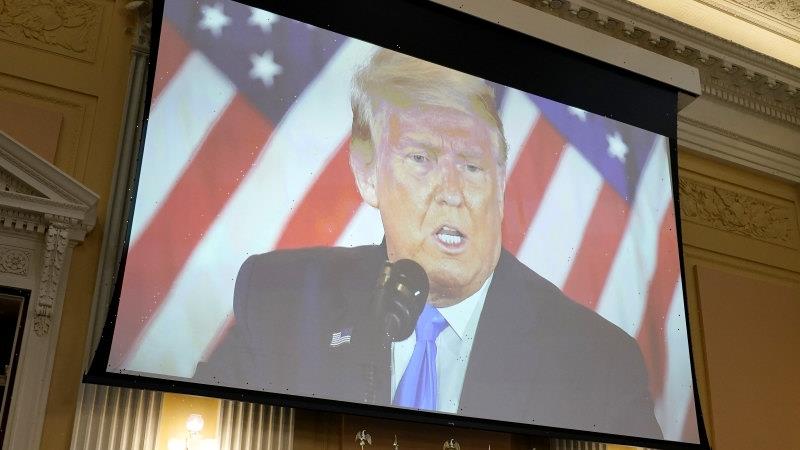 Washington: Donald Trump was the first American president to win office with no prior government or military service, the first sitting president to be impeached twice, and he’s now the first former president to face criminal referrals from a congressional committee, after a damning probe into last year’s Capitol riot recommended he be prosecuted. 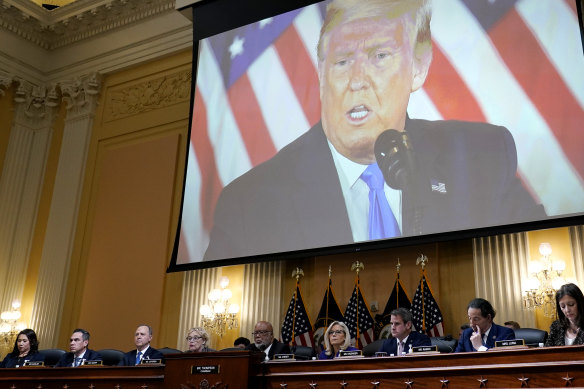 A video of former US president Donald Trump is displayed as members of the House select committee to investigating the January 6 attack on the US Capitol held its last public meeting on December 19.Credit:AP

He certainly knows how to set precedents.

Politically, the optics aren’t good. It’s been one month since Trump announced his intention to run for the White House in 2024, despite being largely blamed for the Republicans’ poor showing in the November midterm elections.

Since then, his attempted comeback has been marred by one downturn after another: polls showing he’s losing favour among his base; the loss of support by mega-donors and media moguls in favour of younger rivals such Florida Governor Ron DeSantis; and the controversial dinner he hosted with well-known anti-Semites Kanye West and Nick Fuentes.

Legally, however, the impact of the January 6 referrals are questionable.

While there’s no doubt the decision by a Congressional committee to refer Trump for criminal prosecution is significant and historic, it is also merely symbolic and has no legal weight on whether the Justice Department – which is conducting its own probes into Trump – might act on them. 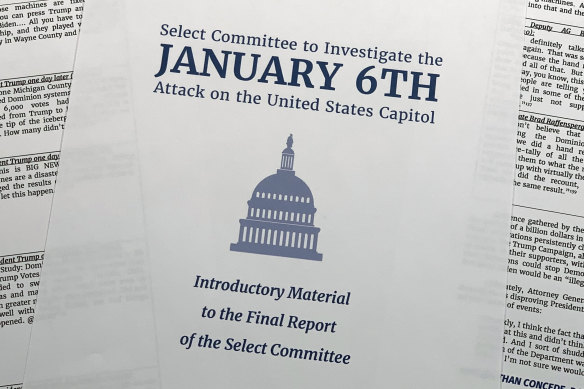 Pages of the executive summary from the House select committee investigating the January 6 attack.Credit:AP

Four referrals have now been made: obstruction of an official proceeding (in this case, Congress’s counting of the electoral votes); conspiracy to defraud the United States (reflecting the claim that Trump worked with others to subvert the election); conspiracy to make a false statement (which relates to using legal documents to create a “fake electors” scheme to flip the 2020 results); and “inciting”, “assisting” or providing “aid and comfort” to an insurrection (something for which Trump was impeached by Congress but later acquitted).

Among those, the most serious referral is the insurrection claim, which – if pursued and proven – could exclude Trump from running for office.

But this would require prosecutors to clear a high bar by proving beyond reasonable doubt that Trump intended to incite the violence that occurred that day. It would also require overcoming some fairly substantial First Amendment obstacles, which provide strong protections for political speech in America. 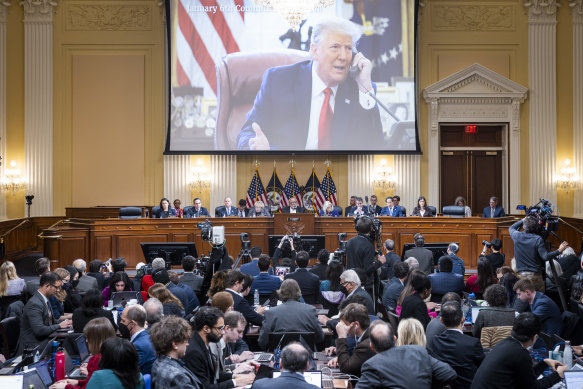 An image of former US president Donald Trump is displayed as members of the House select committee to investigating the January 6 attack on the US Capitol held its last public meeting on December 19.Credit:Getty

Sure, the rallying cry Trump made before the January 6 attack – which involved encouraging supporters to “fight like hell” to stop Joe Biden’s victory from being certified – didn’t exactly look great, but is it a specific call to violence? That’s debatable.

Nonetheless, committee members certainly think so. As the group has revealed during its public hearings, Trump knew his supporters had weapons and body armour when he asked them to march to the Capitol building.

His main frustration, according to witness testimony, was that he couldn’t join them, reportedly even wrestling with a member of his Secret Service when they forced him to return to the White House after his rally.

When the violence began, Trump made it worse by attacking then vice president Mike Pence for proceeding to certify the election. And then, as the committee reiterated, he “did nothing” until hours later when he finally issued a video tweet telling supporters “we love you” but it was time to “go home”.

“To me that’s pretty powerful evidence, certainly of giving aid and comfort to those engaged in an insurrection,” said Democrat panel member Adam Schiff.

Whether the department agrees is yet to be seen.

On one hand, a federal judge in Washington has already laid the groundwork for a potential insurrection case against Trump in a ruling in February. As part of that ruling, the judge found that there was a reasonable case to be made that Trump had aided and abetted those who breached the Capitol, partly by waiting so long to call publicly for the rioters to stand down.

On the other hand, the department has already embarked on more than 900 criminal cases against people involved in the violence that day, but not once has it charged anyone with insurrection.

Former Justice Department official Alan Rozenshtein, who is now a law expert at the University of Minnesota, believes there is “a little higher than a 50-50 chance” that Trump might be charged for his role in the attack.

However, he argues that “it is more likely than not” that Trump could be charged in relation to the department’s other crucial investigation which is examining his alleged mishandling of classified documents stored at his Mar-a-Lago estate.

Whatever the case, the latest developments are hardly a good look for an embattled aspiring presidential candidate whose influence on his party appears to be waning. As Rozenshtein put it: “symbolism is important, especially when it comes to political offences”.