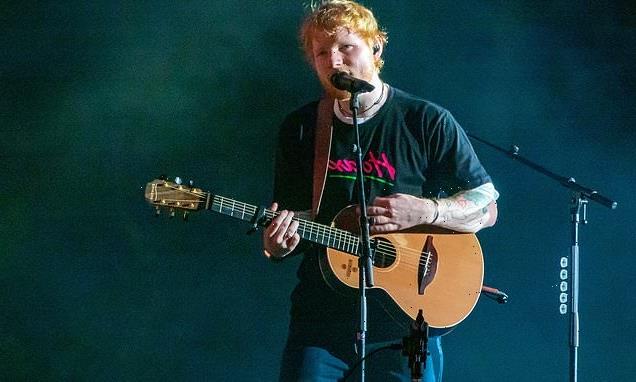 Ed Sheeran in fresh neighbour row amid claims those living near to his £3.7million ‘Sheeranville’ estate are ‘counting the number of times he uses his helicopter’

Many of us live next to nosy neighbours. But when your neighbour is Ed Sheeran, who wouldn’t be tempted into an occasional peak out the window?

The singer, famous for such songs as Thinking out Loud and Shape of You, has a helicopter on his £3.7m Suffolk estate dubbed ‘Sheeranville’ — but officially, he doesn’t have a helipad to go with it.

The private patch of land he uses when taking off in his helicopter looks suspiciously like a helipad, though. At least, that’s what Ed’s neighbours seem to think.

Helicopters are permitted to take off and land at a ‘temporary’ site, unless it is used for more than 28 days in any one calendar year, according to the Town and Country Planning General Development Order of 1988.

His Suffolk residence, where he lives with his wife Cherry Seaborn, includes five houses, a football pitch, an orchard, an outdoor kitchen, entertainment area and a ‘wildlife pond’, which was the subject of complaints last year. 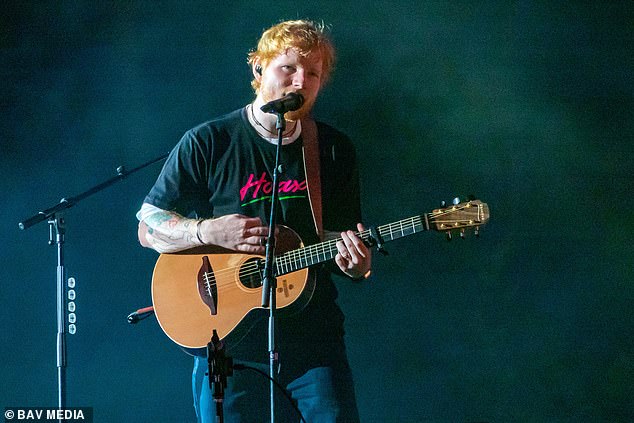 Ed Sheeran has a helipad behind his house, which his neighbours are eyeing. The singer is only allowed to use it 28 times a year, and they are keeping count of his visits 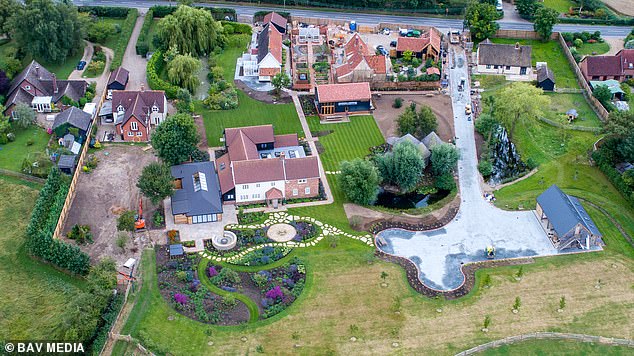 Suffolk home of Ed Sheeran, known as Sheeranville, which is the UK’s most Googled celebrity home, is pictured

If Sheeran exceeds the 28-day rule, he will have to seek retrospective planning permission, likely costing him a pretty penny.

And according to sources quoted in The Sun, it’s a worry Ed should take seriously.

His neighbours are planning to snitch on him if they catch the singer sneaking in a 29th landing at any point this year.

They’re noting down each time he lands and departs, sources said.

‘Some of Ed’s neighbours have been counting the number of times he uses a chopper,’ said the quoted source. ‘He can’t seem to catch a break when it comes to his house.

‘Some of them have kicked up a stink before about his plans and now they’re on helicopter watch. If Ed lands more than 28 times in a year he’ll have to get retrospective planning permission for the helipad.’

Ed’s house also has a football pitch and a ‘wildlife pond’.

Asked what a wildlife pond was, he said: ‘It is grey, filled with tadpoles and swamp stuff. I do get in it – but it’s not a swimming pool. It’s nature. Stormzy got in.’

A swimming pool would also have required planning permission, had Ed installed one.

He added: ‘I just think people need to mind their own business.’ 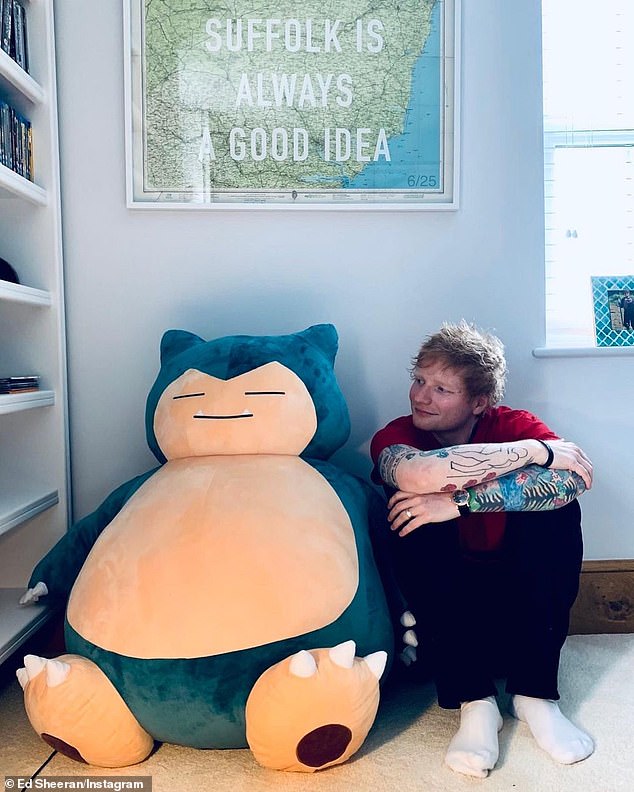 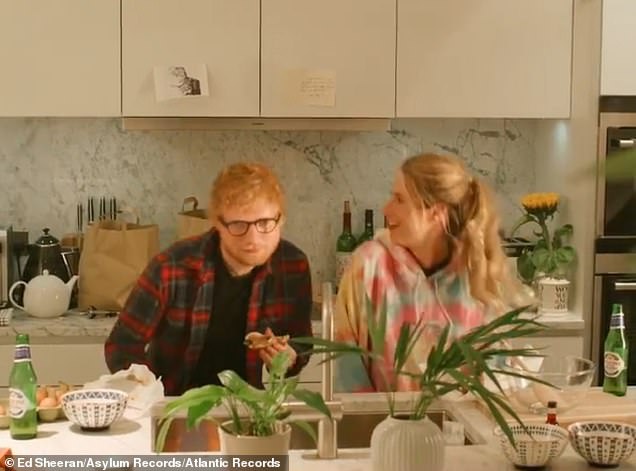 Sweet: Over the years, Ed has offered his 32million fans tiny glimpses into his home life and he shared a look at his £19.8m Holland Park mansion in his music video for Put It All On Me with his wife Cherry Seaborn in 2019 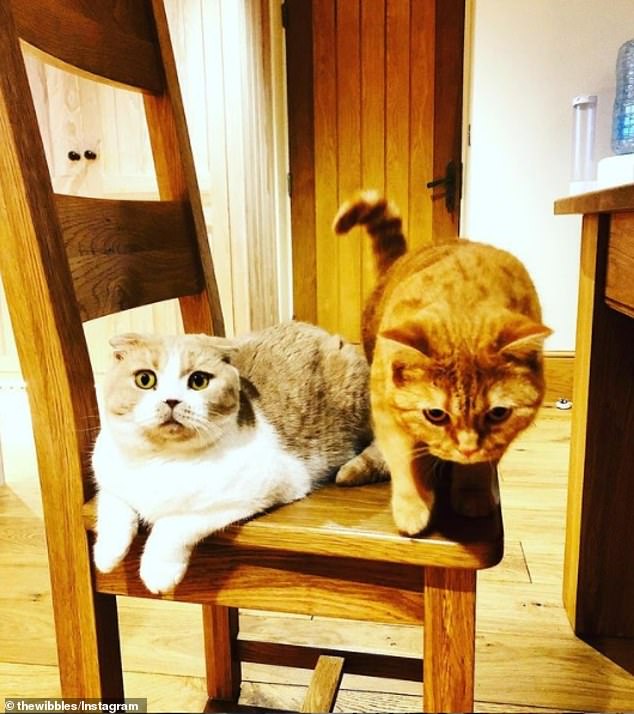 Meow! Ed has also shared glimpses into his various properties from his two cats’ – Calippo and Dorito – Instagram

It’s not the first time Ed has has complaints from his neighbours.

In 2018, council officials challenged him over an outdoor sauna and a pub-style sign on a Grade II-listed barn.

He was told to apply for planning permission or remove them. Plans for a chapel were also refused, before a revised scheme was approved last autumn.

Extending his garden would have ‘little or no detrimental impact upon the amenity of neighbouring properties’, the submission adds.

But an objection on Sheeran’s behalf has been made by Paul Smith, of Apex Planning Consultants.

Mr Smith said the new garden would ‘look out of place in the village’ and ‘would extend the village into the countryside in an unplanned and artificial way’, but added that the singer was happy to compromise.

Representatives for Sheeran did not respond to MailOnline’s request for comment before publication.

Ed Sheeran has accumulated an unbelievable 27 properties since 2012, both within and outside of London:. To date, his portfolio includes: 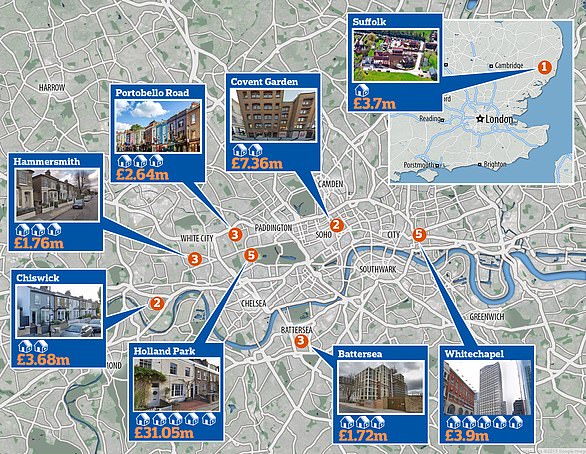 There’s no place like home! The singer, 30, is also said to own 27 properties in London as part of his impressive £57million portfolio