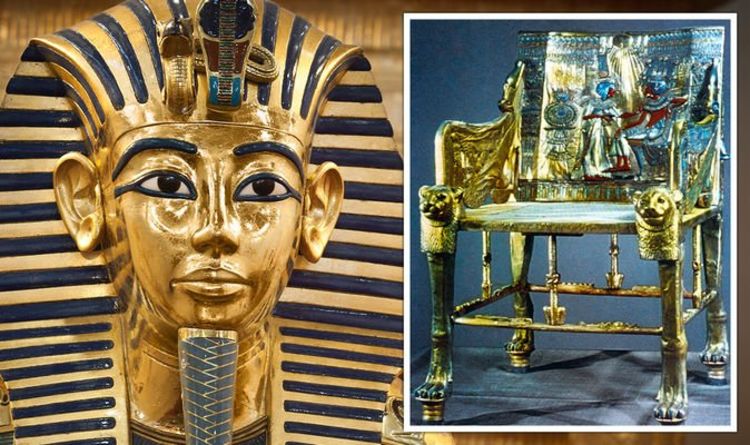 Known affectionately around the world as King Tut, the 18th Dynasty pharaoh is arguably the most famous name in ancient Egypt. Inheriting the throne at just eight years old, experts believe the “Boy King’s” father was Pharaoh Akhenaten, reported to be the mummy found in the tomb KV55 – across the road in the Valley of the Kings. Some have also claimed Tutankhamun’s mother was Nefertiti, the Great Royal Wife of Akhenaten, and the pair reigned during what was one of the wealthiest periods of Egypt’s ancient history.

And Egyptologist Professor Joann Fletcher detailed during Odyssey’s ‘The Valley Of Kings: The Egyptian Golden Age’ how experts are still learning more.

She said: “His treasure, discovered by Howard Carter in 1922, was the most famous archaeological find of all time.

“Tutankhamun’s mask is the epitome of ancient Egypt, so very familiar, yet so many of his treasures are holding a long-standing secret.

“I’ve come to Oxford University’s Griffith Institute to examine the most detailed records of his burial.

“Captured on delicate glass slides, these are the original negatives taken by Howard Carter’s photographer at every stage of the 10-year excavation.

“They reveal Tutankhamun’s burial in a way not usually seen, for this is the linen shroud.”

Prof Fletcher got a first-hand look at the snaps that showed the state of his tomb and sarcophagi when it was found 100 years ago.

She said: “This looks like the embalmers have just finished, the family have laid their wreaths and floral tributes before the lid went on.

“What a privilege to actually see this in black and white, wow.

“For all his fabled wealth, Tutankhamun was, in life, a fairly insignificant pharaoh, but his premature death after only a decade as king offered Karnak’s priests the opportunity to obliterate traits of Akhenaten, Nefertiti and the Amarna period.

“These wonderful photos of his burial treasure reveal how they did it.”

However, Prof Fletcher explained how research has revealed that “all is not what it seems” when they studied an image of his famous golden throne, where he is depicted with his wife Ankhesenamun.

She added: “Look at the back of the queen’s head where her wig originally was, it’s been slightly cut down – it’s the same with Tutankhamun’s crown – a new crown has been added.

“By altering the images, the throne had been customised for Tutankhamun.

“But the biggest giveaway of who this once belonged to is in the diety that looms large above the king and queen, it’s the Aten Sun disk that takes centre stage.

“So it seems that the two figures once believed to be Tutankhamun and his wife were originally Akhenaten and Nefertiti.”