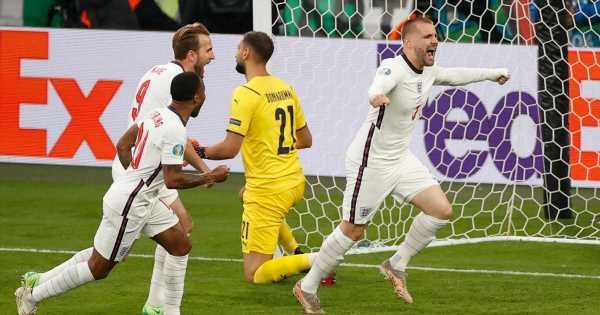 England's Three Lions heroes left fans in dreamland after taking the lead in the Euro 2020 final in less than two minutes.

The goal left thousands in the stadium and millions watching at home celebrating wildly.

The early goal came after shameful scenes outside the stadium where ticketless fans stormed the barriers in a desperate bid to get in to the ground.

Wembley and UEFA chiefs both said no fans had made it in without tickets, but others in the ground reported seeing families in tears at the mayhem at the turnstiles.

Shocking footage shows dozens of supporters smashing bottles, throwing cones, singing football chants and covering the ground with rubbish as hundreds gathered in London for the build-up to the historic match.

Some even damaged windows by throwing missiles after spotting people filming the carnage on their mobiles from indoors.

It comes after fans were spotted partying on top of buses near Wembley stadium in London.

Huge street celebrations have broken out ahead of England's Euros final with Italy.

Pictures show a sea of England shirts as supporters go wild ahead of the national team's first major cup final since 1966. Some fans were queuing outside pubs as early as 6am this morning in anticipation for the huge match while others were belting out the team's anthem It's Coming Home.

The Queen and Boris Johnson have praised Gareth Southgate's squad ahead of the final showdown at 8pm.

Beers are already flying into the air with revellers releasing coloured gas in jubilant scenes as they countdown the hours to the end of 55 years of hurt.

Carnage is breaking out some fans going completely naked as what appear to be potted plants are flung into the air.

Thousands of Three Lions fans descended on Leicester Square while supporters who headed to Wembley hours before kick-off let off flares, filling the air with smoke.

Prince William has said he "can't believe this is happening" as he said the "whole country is behind you".

England supporters are set to drink the country dry in the nation’s biggest party since 1966.

There are sure to be sore heads on Monday morning as fans are predicted to sink 7.1 million pints on Sunday during the match, with 13 million pints expected to be drunk during the day as a whole.

The match is expected to provide a £3 billion boost to the economy from booze, bets and food sales.

After a huge 26.3 million people watched the dramatic semi-final win against Denmark, bookmakers reckon the final could become the most watched TV event in British history.

The mark is currently the 32.3 million who tuned in to watch the 1966 World Cup final between England and West Germany.

The British Beer and Pub Association claimed the number of pints drunk could be even higher if coronavirus lockdown restrictions had already been removed.

Experts think as many as 9.5 million pints could have been sold during the match with 17 million across the day, costing pubs around £9 million in beer sales.