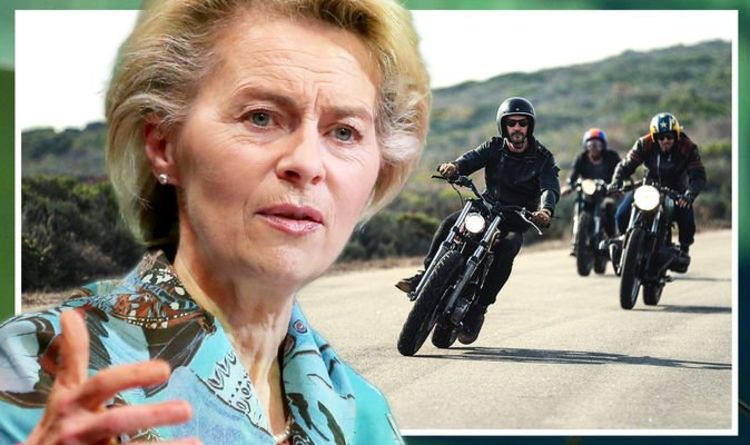 The European Commission is planning to impose strict emissions restrictions on vehicles that only zero-emission vehicles would be likely to meet. Motorbikes are not currently included in its plans, but riders fear that they will be restricted next.

The Commission has set a target for the bloc to reduce its net greenhouse gas emissions by at least 55 percent by 2030, compared to 1990 levels.

In a 2019 “European Green Deal”, the Commission laid out its plans to knock emissions in the transport sector by a whopping 90 percent by 2050.

It stated that more than 70 percent of greenhouse gas emissions in transport comes from road transport, which includes motorbikes.

It is unlikely that the bloc’s extreme targets would be met without some level of restrictions being imposed on motorbikes.

Michael Lenzen of the German Motorcyclists’ Association said banning internal combustion engines “would be a disaster”.

He added that it “would lead to the death of motorcycling as a hobby for many”.

He said: “If I want to go to France and ride a few nice curves but have to take an hour-long charging break after every 150 kilometers, that’s no fun at all.”

An investigation by “MythBusters” into the eco-friendly nature of motorbikes found that, unsurprisingly, they are more fuel-efficient than cars and emit less carbon dioxide.

However, it found that mikes emit more smog-forming hydrocarbons and oxides of nitrogen, as well as carbon monoxide.

Party because of its size, it is more difficult to electrify a motorbike than a car.

A number of cities across Europe already restrict certain types of motorbikes.

This includes Paris and Barcelona.

Motorbikes in London must also meet minimum emissions standards when travelling within the “Ultra Low Emission Zone”, covering all areas in the North and South Circular Roads.

Riders whose bikes do not meet these standards must pay daily fees or will face a hefty penalty charge.

Earlier this year, the British Government also announced that it will ban the sale of new petrol-powered motorbikes from 2035.

After this date, all new motorbikes sold in the country must be zero emission.

A Federation of European Motorcyclists Associations survey published in September suggested that such a ban was opposed by more than 90 percent of bikers from across the word.