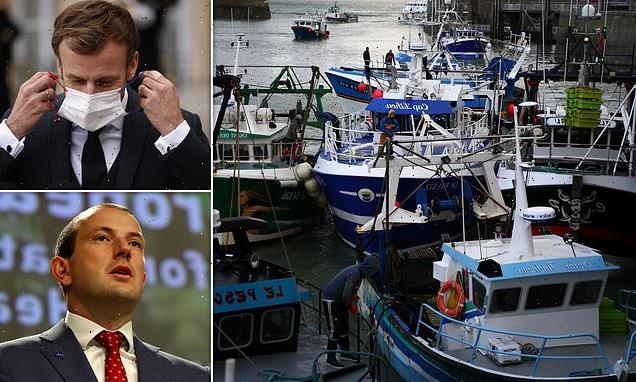 The European Union has set a December 10 deadline for the UK to resolve the worsening post-Brexit row with France over fishing licences.

The EU’s fishing chief, Virginijus Sinkevicius, made the demand during a meeting with Environment Secretary George Eustice yesterday.

It came after French President Emmanuel Macron was left humiliated after Belgium snubbed his overtures to back Paris in the dispute with Britain.

Mr Macron dispatched ministers to Brussels this week as part of his efforts to build support for his stance and for punishing the UK over the row.

The UK is bracing for potential protests from French fishermen in the coming days after they vowed to ‘hinder English interests’ to try to force Boris Johnson’s hand.

The European Union has set a December 10 deadline for the UK to resolve the worsening post-Brexit row with France over fishing licences. French trawlers are pictured in the port of Granville, Normandy on November 4

The EU’s fishing chief, Virginijus Sinkevicius, made the demand during a meeting with Environment Secretary George Eustice yesterday

The ongoing row centres around the issuing of fishing licences to EU trawlers to work in British waters.

The terms of the Brexit deal dictate that boats must be able to demonstrate, using GPS data, that they worked in the waters before the UK’s split from Brussels.

France has accused the UK of failing to grant licences to all eligible vessels but Britain has said some boats have been unable to prove their claims with data and as such have had their applications rejected.

Talks on the issue remain ongoing between the UK, France and the European Commission but French fishermen are ‘exasperated’ by the ‘endless months of waiting’ and have threatened to take disruptive action.

UK ministers have demanded assurances from Paris that trade will not be affected after French fishing chiefs signalled they could block Calais and other ports to stop exports to the UK.

France has been putting pressure on the European Commission to be ‘more active’ in helping to resolve the standoff and to secure more licences from the UK.

However, French efforts to bolster support for its position suffered a set back after Belgium snubbed its plea for backing.

They said the French were left under no illusions that the row over access to waters near Britain and the Channel Islands was a ‘bilateral matter’ for the negotiating table.

‘There is little appetite for a trade war over this,’ the source said. ‘This is not our fight. We still want to resolve the outstanding issues through dialogue with the UK.’

The snub by Belgium is the latest embarrassment for Mr Macron ahead of April’s presidential election.

One senior EU diplomat said: ‘It is quite clear that France is trying to use this dispute for domestic political purposes.’

Another EU source, who works closely on Brexit issues, said most governments want to avoid being dragged into the spat.