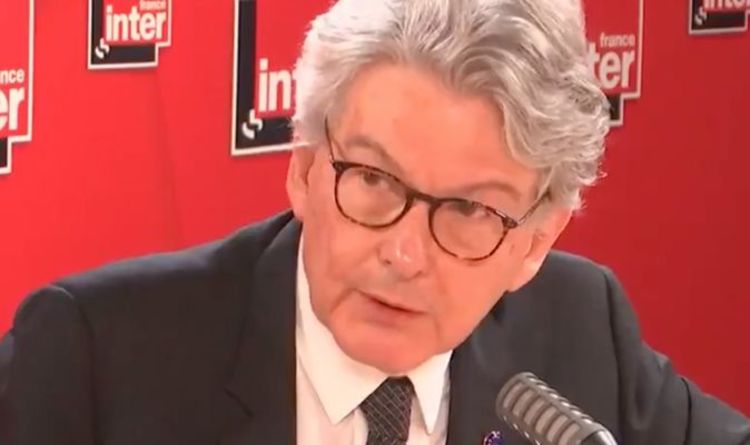 Talking to France Inter radio, the EU Commission chief said accepting EU rules is a prerogative of being part of the bloc. But he added that to change them, one can simply hold a referendum and leave the club.

He said” “When a country is part of the European Union, it has accepted its rules. If we want to change them, you can get out of them, just hold a referendum.”

The claim backfired as supporters of a Frexit referendum in France used Mr Breton’s words to call on the French government to hold a vote on the EU’s membership.

“A referendum on the EU is the only way to express democracy.

“We have launched a petition to obtain this referendum. Let the French decide their future!”

As Mr Breton claimed French people would vote to remain in the EU should they be given a chance to vote, Generation Frexit leader Charles-Henri Gallois also blasted: “A truth and a lie from Thierry Breton.

“Truth: you can’t change the EU rules, the only way to do it is to get out.

“Lie: the French would vote for the maintenance. He knows absolutely nothing about it.

“Let’s do this campaign and this referendum!”

The EU Commissioner was referring to Poland’s Constitutional Tribunal ruling on the supremacy of some Polish laws over EU regulations.

The ruling sparked fears Poland could soon leave the bloc.

But Mr Breton said on Monday he did not believe “for one second” there will be a “Polexit” after last week’s ruling.

He said: “We are waiting for a written decision (…) and then we’ll analyse it (…) I don’t believe for one second there will be a Polexit.

“More than 100,000 Poles demonstrated on Sunday in support of European Union membership.”

According to the organisers, protests took place in over 100 towns and cities across Poland and several cities abroad, with 80,000-100,000 people gathering in the capital Warsaw alone, waving Polish and EU flags and shouting “We are staying”.

“We know why they want to leave (the EU) … so that they can violate democratic rules with impunity,” he said, speaking in front of Warsaw’s Royal Castle, surrounded by thousands of protesters flanked by police vans flashing their lights.

PiS says it has no plans for a “Polexit”.

But right-wing populist governments in Poland and Hungary have found themselves increasingly at odds with the European Commission over issues ranging from LGBT rights to judicial independence.

“Just as Brexit suddenly became a fact, something no-one expected, the same thing can happen here,” said Janusz Kuczynski, 59, standing in a street in Warsaw’s historic district leading up to the Royal Castle.

Welcoming the court ruling on Thursday, Polish Prime Minister Mateusz Morawiecki said each member state must be treated with respect and the EU should not only be “a grouping of those who are equal and more equal”.

State-run TVP broadcaster, which critics say focuses heavily on presenting the government’s point of view, ran a news ticker that read “protest against the Polish constitution” during its coverage of Sunday’s events.

Speakers at the demonstrations included politicians from across the opposition, artists and activists.

“This is our Europe and nobody is going to take us out of it,” said Wanda Traczyk-Stawska, a 94-year old veteran of the 1944 Warsaw Uprising against Nazi German occupiers.