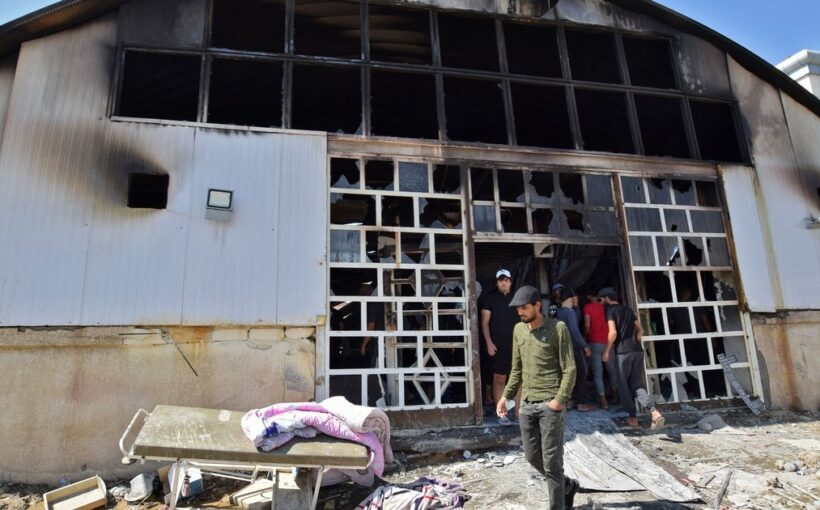 A massive blaze has claimed the lives of at least 64 patients being treated for Covid-19 ward at a hospital in southern Iraq.

Dozens more were said to be critically injured after the fire broke out at the al-Hussein Teaching Hospital in Nasiriyah city on Monday, sparking a large rescue operation for several people who remain missing.

Authorities are still trying to piece together what caused the devastation but it is thought an oxygen tank explosion may have led to the fire or a possible electric short circuit could have been responsible.

Those who died in the blaze, which broke out at the 70-bed capacity three-month-old Covid ward, would have suffered from severe burns with many more critically injured, reported news agency AFP.

Distressing scenes saw charred bodies being brought from the wreckage and walking wounded were witnessed struggling to breathe as they suffered from smoke inhalation.

Hospital guard Ali Mushin told Reuters: "I heard a big explosion inside the coronavirus wards and then the fire had erupted very quickly."

Major general Khalid Bohan, head of Iraq’s civil defence, told local media the hospital structure was made of “flammable materials” and was thus “prone to fire”.

Tensions are rising as fire victims families demanded justice for their loved ones and rioters turned to violence resulting in two fire-bombed two police vehicles.

Iraq’s president, Barham Salih, took to Twitter calling the catastrophe a 'product of persistent corruption and mismanagement that underestimated the lives of Iraqis.'

He called for 'rigorous reviews' and 'accountability'' into the performance of institutions who allowed the tragedy to occur.

The country’s prime minister Mustafa al-Kadhimi has ordered the arrest of the hospital’s head.

Mohamed al-Halbousi, the parliament’s speaker, tweeted that the fire was “clear proof of the failure to protect Iraqi lives, and it is time to put an end to this catastrophic failure.”

The potential links to dangerous oxygen cylinder storage have sparked local media reports which say lax safety rules “especially around oxygen cylinders” could be present in at least seven hospitals across Iraq.

Tragically, this is the second time during the pandemic the country has suffered due to a catastrophic blaze at a hospital.

Back in April, 82 patients died when a oxygen tank reportedly exploded on a Covid-19 ward at Ibn al-Khateeb hospital in the capital Baghdad.

The two disasters have placed even more strain on Iraq's buckling health care system as the country has had more than a million infections and 17,592 deaths due to the pandemic.