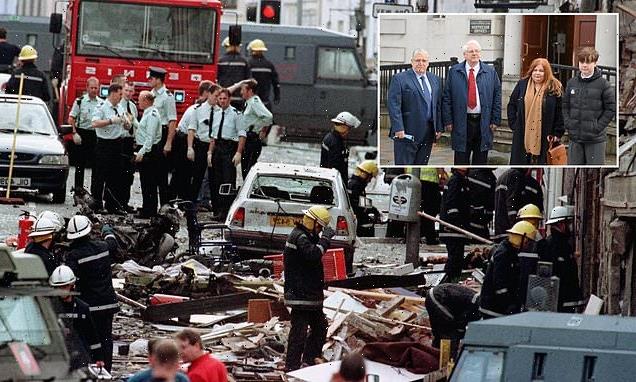 Public inquiry into Troubles most deadly bombing at Omagh that killed 29 people in 1998 should examine if it could have been stopped by informant’s tip-off, judge rules

A failure to act on an informer tip-off or use intelligence and surveillance evidence about previous terror attacks are among the reasons for a judge directing a fresh investigation into the Omagh bombing, it emerged today.

The new probe will also examine whether a politically motivated ‘de-escalation’ of the security approach to dissident republicans in the months before the 1998 attack resulted in crucial intelligence not being acted upon.

The alleged security failings were outlined in a judgment in a legal challenge against the UK Government’s refusal to hold a public inquiry into the Real IRA atrocity, which killed 29 people, including a woman pregnant with twins. 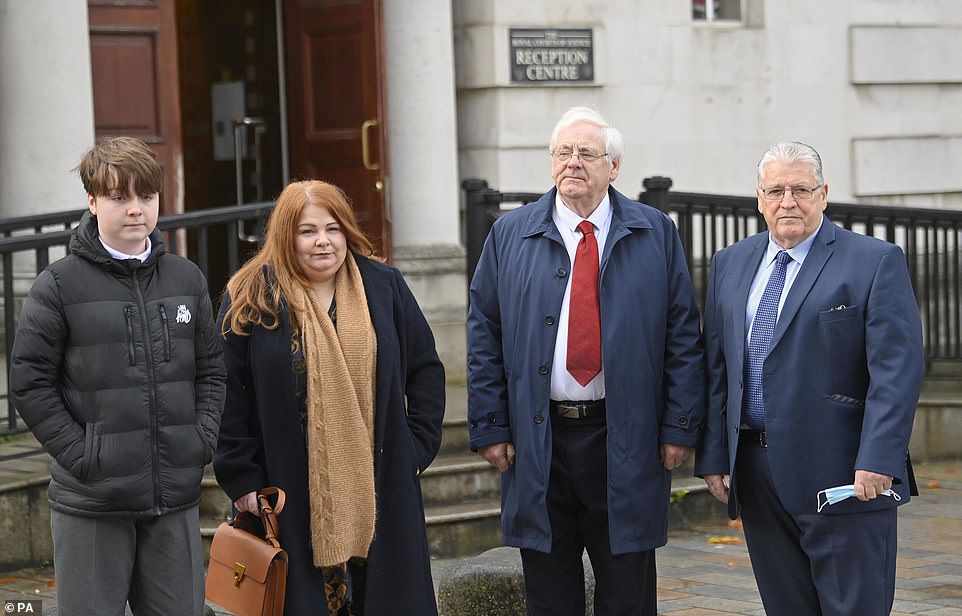 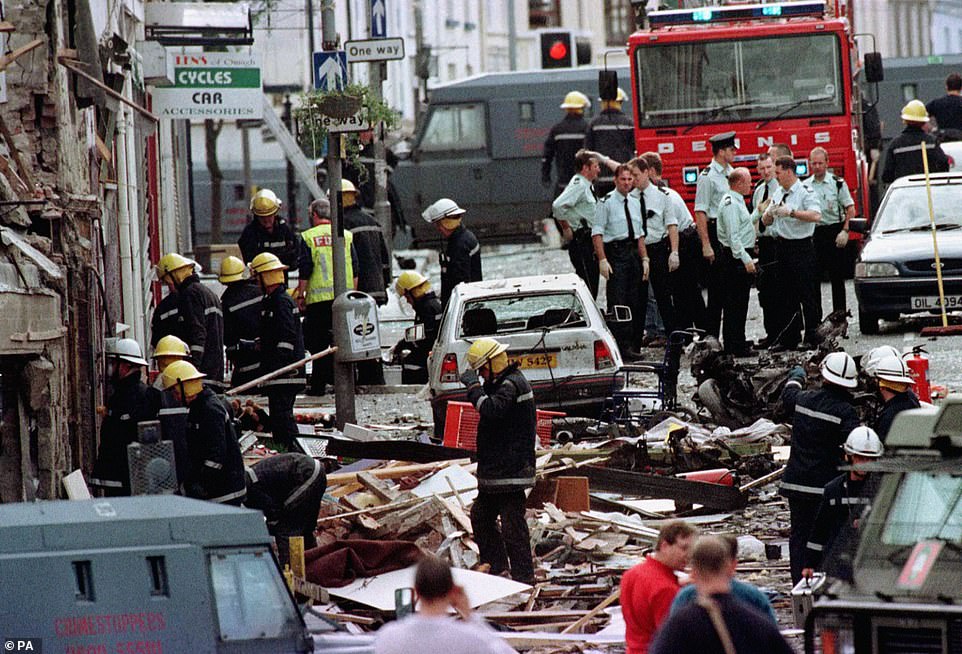 The Real IRA atrocity in Omagh, County Tyrone, in August 1998 killed 29 people, including a woman pregnant with twins

In July, Mr Justice Horner delivered his conclusions in the long-running judicial review, ruling it was potentially plausible that the attack could have been prevented.

He directly recommended that the UK Government carry out a human rights-compliant investigation into alleged security failings in the lead-up to the attack in August 1998.

Here are some of the key events in the Omagh families’ long quest for justice for their loved ones:

In September, a month after the bombing, the RUC and Garda arrest 12 men in connection with the atrocity. They subsequently release all of them without charge.

Seven men are arrested in a joint RUC-Garda operation.

Colm Murphy is charged with conspiracy to cause an explosion likely to endanger life or cause injury. The then 48-year-old, from Ravensdale, Co Louth, is also charged with membership of an unlawful organisation – the so-called Real IRA.

At the inquest into the deaths of the 29 victims, coroner John Leckey says he will press the courts to prosecute the bombers with the destruction of unborn twins. Avril Monaghan had been pregnant with twins when she was killed. Mr Leckey says he is in no doubt that 31 people were killed in the bomb and that he will write to the Director of Public Prosecutions to ask him to consider charging anyone apprehended for the bombing with child destruction.

A report by the Police Ombudsman finds the RUC Special Branch failed to act on prior warnings and condemned the RUC’s investigation of the bombing.

Colm Murphy is found guilty by the Dublin Special Criminal Court of conspiracy to cause the Omagh bombing. He is jailed for 14 years.

Alleged Real IRA leader Michael McKevitt, from Blackrock Co Louth, is found guilty of directing terrorism and membership of an illegal organisation at Dublin’s Special Criminal Court. He is sentenced to 20 years.

Sean Hoey, of Molly Road, Jonesborough, Co Armagh, is charged with the murder of the 29 people killed in the Omagh bomb. He is the first person to face a murder charge in relation to the attack.

Murphy’s conviction in the Irish courts is overturned and a new trial ordered.

Hoey is found not guilty at Belfast Crown Court of 58 charges, including the murders of 29 people in the Omagh bombing. Clearing Hoey, the judge criticises police witnesses for ‘deliberate and calculated deception’ during the lengthy trial.

The families of some of the victims of the bomb begin a landmark civil case, suing five men they claim were involved.

A memorial garden is opened in Omagh to remember the victims of the blast, as well as a monument on the site where the bomb exploded.

The judge in the civil trial rules McKevitt, Murphy and two others – Liam Campbell, from Dundalk, and Seamus Daly, from Monaghan – were all liable for the Omagh bomb. He orders them to pay a total of £1.6 million damages to 12 relatives who took the case. A fifth man, Seamus McKenna from Dundalk, is cleared of liability for the bombing.

Murphy is cleared following a retrial after interview evidence from the Garda is ruled inadmissible.

McKevitt and Campbell lose their appeal against the civil trial verdict. Murphy and Daly both win their appeals.

Murphy and Daly are both found liable for the Omagh bombing after a civil retrial.

McKenna dies after falling off a roof in Dundalk.

Northern Ireland Secretary Theresa Villiers rules out a public inquiry, insisting a fresh investigation is unlikely to reveal anything more about the attack. Michael Gallagher, whose son Aiden died in the bombing, takes legal action against Ms Villiers’s decision.

Daly is charged with the murders of 29 people in the Omagh bombing.

The prosecution case against Daly collapses. The Public Prosecution Service decides there is no reasonable prospect of conviction after a key witness contradicted his own previous testimony.

A bid by Campbell and McKevitt to overturn the civil ruling that found them liable for the Omagh bomb is rejected by the European Court of Human Rights.

Relatives of Omagh bomb victims sue PSNI Chief Constable George Hamilton for investigative failings they believe let the killers escape justice. The bereaved families issued a writ against the chief constable seeking damages and a declaration their human rights have been breached

In July, Mr Justice Horner delivered his conclusions in the long-running judicial review, ruling it was potentially plausible that the attack could have been prevented.

He directly recommended that the UK Government carry out a human rights-compliant investigation into alleged security failings in the lead-up to the attack.

Today, he set out the rationale behind his conclusions as he delivered the fuller judgment at Belfast High Court.

While having no jurisdiction to order the Irish Government to act on the matter, the judge also urged authorities there to establish their own probe in light of his findings.

However in the summer Mr Justice Horner did not outline the rationale behind his conclusions. He set that out today as he delivered the fuller judgment at Belfast High Court.

The judge made clear that his role was not to make definitive conclusions on issues raised by the applicant – bereaved father Michael Gallagher – but rather to assess whether he had established an arguable case that merited examination in a fresh investigation.

He rejected six of the 10 grounds submitted by Mr Gallagher’s legal team but accepted the other four.

Among those was that an RUC informer, known as Kevin Fulton, passed on information to his handlers in the days before the Omagh attack, indicating that the Real IRA was soon to move a bomb across the border into Northern Ireland.

The court case heard claims that the authorities did not act on this tip due to the fact that a Real IRA bomb-maker identified by Mr Fulton was another security force informer.

The judge said Mr Fulton’s evidence could not be ‘dismissed summarily’, despite what he described as an attempt by government lawyers to portray him as ‘irredeemably unreliable’.

He said the court should be slow to make a judgment one way or the other on Mr Fulton’s reliability.

‘I am satisfied that it is arguable that the intelligence supplied by Kevin Fulton, either on its own or more importantly in conjunction with other intelligence about the activities of those who planned and planted the Omagh bomb and other bombs, had a real prospect of preventing this tragedy,’ he said.

The judge said there was a strong case for taking proactive steps against those engaged in dissident terrorism prior to the bomb.

However, he said there may have been ‘good reasons’ why the authorities adopted a ‘cautious approach’, including the risk of uncovering an informant within the Real IRA.

Mr Justice Horner said the authorities may have also believed that taking a more robust approach against dissident suspects had the potential to destabilise Northern Ireland’s fragile peace process.

Another ground upheld by the judge was over failures to act on surveillance data gathered by UK intelligence agency GCHQ around the time of the attack and mobile phone cell site data that, if analysed appropriately, would have linked Omagh suspects to a series of other bombings in Northern Ireland in the months leading up to the atrocity.

The judge said this information could have prompted police action against the suspects.

‘There is no doubt that the authorities in Northern Ireland could have made life very uncomfortable indeed for those dissident republicans who could have been identified on the open evidence which was potentially available as being involved in terrorist activities in the six months leading up to Omagh,’ he said.

He said a ‘proactive’ joint approach by the RUC and Garda could have offered a ‘real prospect of preventing the bomb’.

Mr Justice Horner also upheld a ground claiming that police investigating the Omagh bomb were not given all information on suspects held by RUC Special Branch.

‘There was arguably a failure of policy – instead of encouraging authorities to use all legal power given to them to deal with terrorism, there was a de-escalation of security which was impaired by political thinking,’ he said.

The judge said there was a ‘plausible argument’ that there was a ‘failure to access all the intelligence potentially available in respect of earlier dissident attacks’ and that this would have enabled the authorities to disrupt dissidents and that ‘consequently there was a real prospect of avoiding the Omagh bombing’.

The Omagh bomb, which happened months after the signing of the Good Friday peace agreement, was the worst single atrocity of the Northern Ireland conflict.

Eight years ago, Mr Gallagher, whose son Aiden died in the blast, launched the judicial review against the Government.

Mr Justice Horner said he was not going to specifically order that the UK probe into the Omagh bomb takes the form of a public inquiry, explaining that he did not want to be ‘prescriptive’ about the methodology.

He noted that other inquiries had proved costly and had not always delivered outcomes that were satisfactory to those involved.

The judge reiterated that he did not have the powers to order authorities in the Irish Republic to act, but expressed hope that the Government in Dublin would take a decision to investigate events around the bomb, which was transported across the border into Northern Ireland.

In July, Mr Justice Horner was unable to read the full open judgment setting out his reasoning because the person whose job it was to check the document to ensure it did not contain sensitive material was self-isolating with Covid-19.

As well as the open judgment delivered on Friday, there is also a closed judgment, containing sensitive national security information, that can only be accessed by people with relevant clearance.

Outside court, Mr Gallagher expressed hope that the Government will not seek to appeal. He said it is ‘absolutely necessary’ that any investigation is carried out on a cross-border basis.

‘And also in the summing-up it was indicated that the police were politically leaned on in order not to pursue the people that were carrying out those bombings in the lead-up to Omagh.’

Mr Gallagher added: ‘We’ve just come through a process that took over eight years and we’re 23 years after the Omagh bomb. 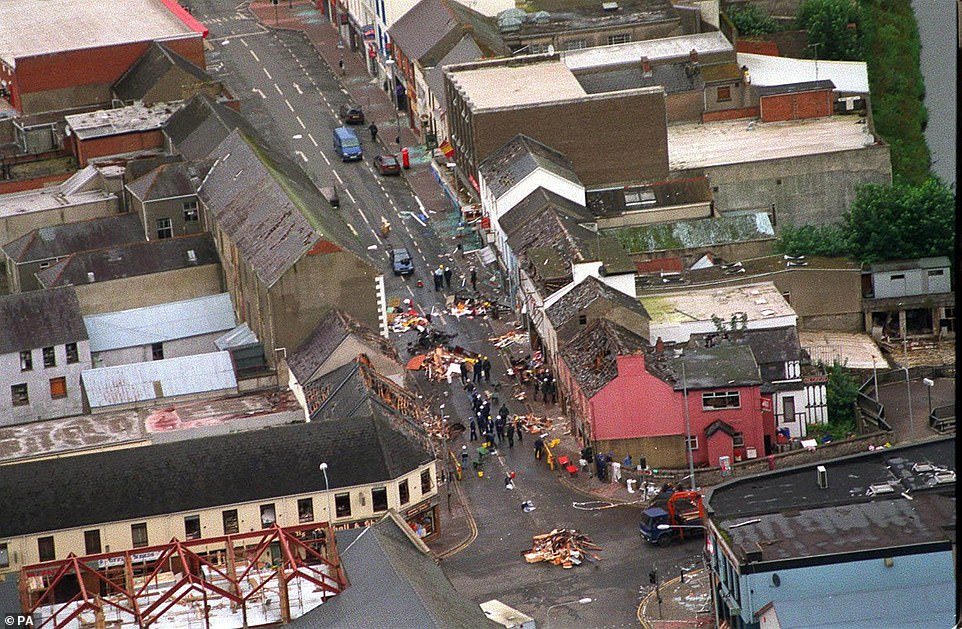 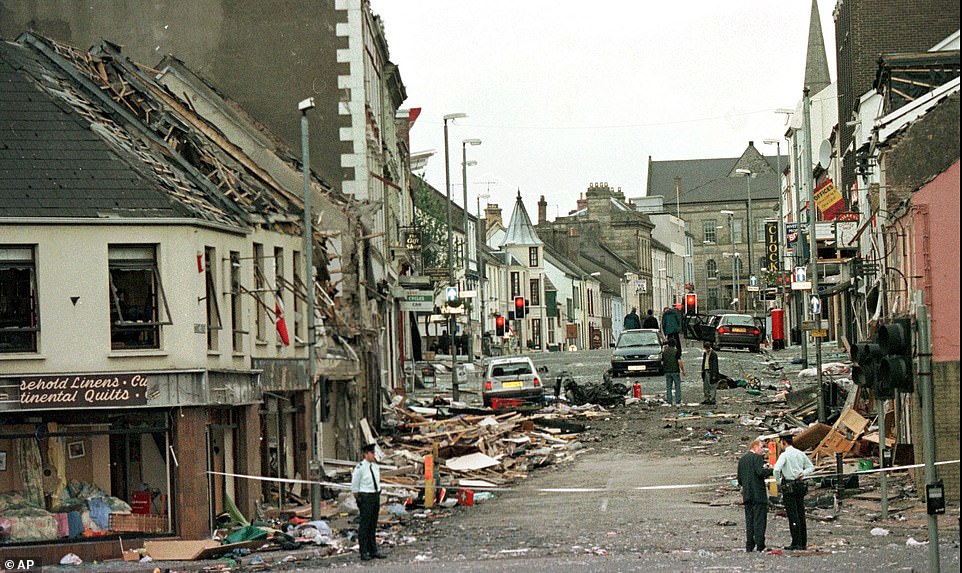 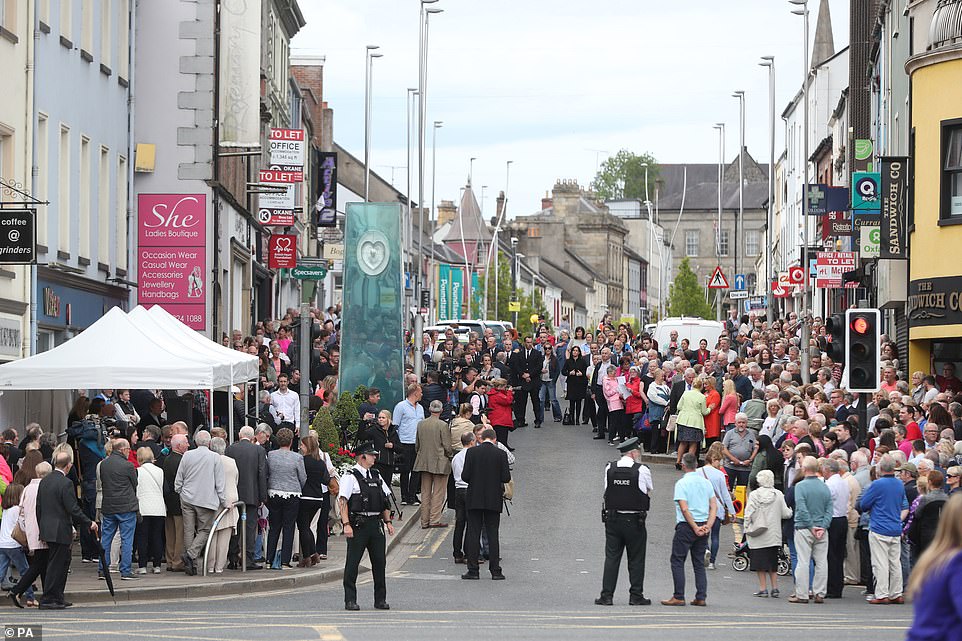 ‘We would like to bring this to an end and we hope the Government can help us by not dragging us through the courts again through a further appeal process.’

Reacting to the judgment, Northern Ireland Secretary Brandon Lewis said: ‘My deepest sympathies go out to all those affected by the Omagh bombing.

‘It was a great tragedy which resulted in unimaginable suffering for the families of those tragically killed and injured. The impact of this atrocity was also felt by individuals and communities across Northern Ireland and further afield.

‘I want again to put on record my sincere regret that the families of those killed and wounded have had to wait so long to find out what happened on that terrible day in 1998. We will now carefully consider the full judgment.’