Hopes of a family reunion this holiday season have been dashed for many Australians whose overseas-based parents have been turned away from flights because they were dosed with foreign COVID-19 vaccines.

The federal government changed the border restrictions to allow the parents of Australian citizens and permanent residents to enter the county in November.

New parents Anuradha Madugalla and Chamath Divarathne from Cranbourne East in Melbourne had been looking forward to Ms Madugalla’s parents visiting from Sri Lanka for Christmas and New Year’s Eve to meet their one-month-old baby. 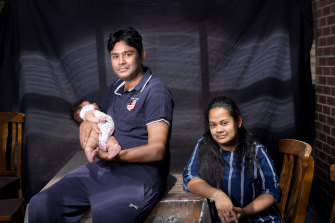 Anuradha Madugalla and Chamath Divarathne have had their hopes dashed of having their parents visit to meet their newborn.Credit:Simon Schluter

But despite having a visa, travel exemption, Australian Travel Declaration, Victorian border pass and Victorian hotel quarantine forms, the older couple were denied boarding in Colombo.

“When we got pregnant we were ready to handle this without our parents but then we received information that parents will be able to come in, so we built up all the hopes just to get shattered three weeks later,” Ms Madugalla said.

Her parents have been vaccinated with the Russian vaccine Sputnik V, which is not recognised for travel to Australia.

Ms Madugalla said they disclosed the type of vaccine and the dates of the doses on all the forms and they were given official confirmation her parents could fly to Australia but must go into hotel quarantine in Melbourne. But when the airline called the Australian authorities, they were told not to allow them to board the flight.

Since then, the family has been unable to get clarification from the Australian or Victorian governments about whether their parents are allowed to come. In NSW and Victoria, vaccinated people can isolate at home, while unvaccinated travellers and all travellers in most other states must complete 14 days of hotel quarantine.

A spokesperson for the Australian Border Force told this masthead the travel exemption for parents is only available to people who are fully vaccinated and, even if an exemption is issued, they could be denied boarding at the departure airport.

However, the spokesperson said people who are not fully vaccinated, including parents of Australian citizens and permanent residents, could apply for an exemption under another category such as on compassionate grounds.

This masthead has also heard from several people in Sydney as well as Melbourne whose parents were vaccinated with the Chinese vaccine Sinopharm and were denied boarding their flight to Australia from Tehran, Iran. The Therapeutic Goods Administration recognises Sinopharm for travelling to Australia but only for people under the age of 60.

Professor Catherine Bennett, chair of epidemiology at Deakin University, said it made sense to wait to see how effective the vaccines are against the Omicron variant.

However, other health experts called for a wider list of vaccines for travel to Australia.

“We have to pay attention to what the world deems appropriate even if we don’t want our citizens to have those vaccines,” he said.

Professor Adrian Esterman, an epidemiologist at the University of South Australia, said Australia should be guided by the World Health Organisation.

WHO recognises Sinopharm for all age groups, while Sputnik V and Sputnik Light do not yet have approval but are going through the process. WHO requires vaccines to be at least 50 per cent effective.

The Department of Health spokesperson said the TGA only recognised foreign vaccines for the purpose of travel to Australia if they “provide the same level of protection as offered by COVID-19 vaccines deployed in Australia”.

“This provides assurance that someone who has had these vaccines and enters Australia is protected to the same extent as someone who is ‘fully vaccinated’ in Australia,” the spokesperson said.

The spokesperson said the available evidence was that Sinopharm did not provide the same level of protection as Australian-registered vaccines but the TGA decided this was acceptable in a younger population because the overall risk of severe disease and hospitalisation was lower. Meanwhile, there was insufficient information to properly assess the protection offered by the Russian vaccines.

Professor Mary-Louise McLaws, an epidemiologist at the University of NSW, said this was illogical given the waning effectiveness of Pfizer and AstraZeneca.

“The idea of not allowing people in with any kind of vaccine, and yet we’re allowing people to walk around the street without a booster, makes no scientific sense,” Professor McLaws said.

“We should let them in and give them a booster and all Australians should be able to put their arms out and get a booster after three months too.”

Professor McLaws welcomed the decision to cut the interval between the second and third dose to four months but said she would have preferred three months based on international evidence.

Liberal backbencher Jason Falinski, the Liberal MP for Mackellar on Sydney’s northern beaches, said the TGA should not change its criteria but people who have had unapproved vaccines “should be allowed to come in through the vaccinated pathway, which requires hotel quarantine.”

Stay across the most crucial developments related to the pandemic with the Coronavirus Update. Sign up to receive the weekly newsletter.