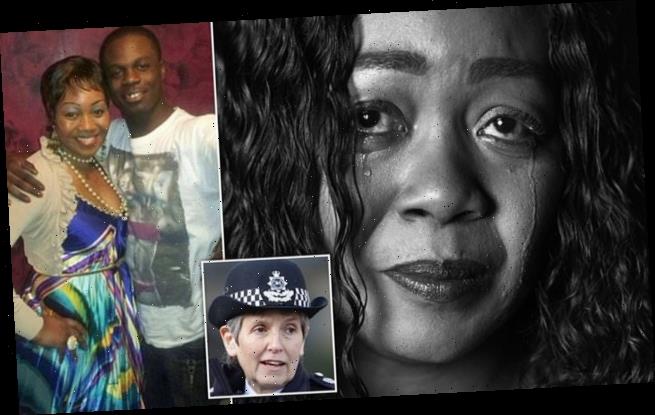 ‘I was out of breath, my stomach was tight’: Five mothers relive moment they called family to tell them their son’s had been stabbed to death as they launch campaign urging Londoners to report knife crime

Five mothers have relived the heartbreaking moments they had to tell family and friends that their sons had been stabbed to death.

As part of a new campaign aiming to tackle knife crime in London, the mothers recalled the ‘hardest calls’ they had to make following the tragic deaths of their sons.

One described how she was ‘breathless, helpless and weak’ as she relayed the news to her own mother.

‘It was the hardest call – I was out of breath and my stomach was tight,’ said Lorraine Jones, whose son Dwayne Simpson was stabbed to death in Brixton in 2014, at the age of 20.

‘Even when I was making a call my hands were shaking. I tried it three times, I was just so helpless and weak.’

Lorraine, a pastor who worked alongside her son to feed the homeless, is one of five mothers supporting Crimestopper’s ‘Hard Calls Save Lives’ campaign.

The campaign, supported by the Met Police, aims to tackle knife crime in the capital by encouraging family members to provide anonymous tip-offs to the charity.

The information can be used to help officers crackdown on knife crime.

It comes as figures released in February revealed how offences have doubled in just six years – going above 50,000 for the first time since records began. 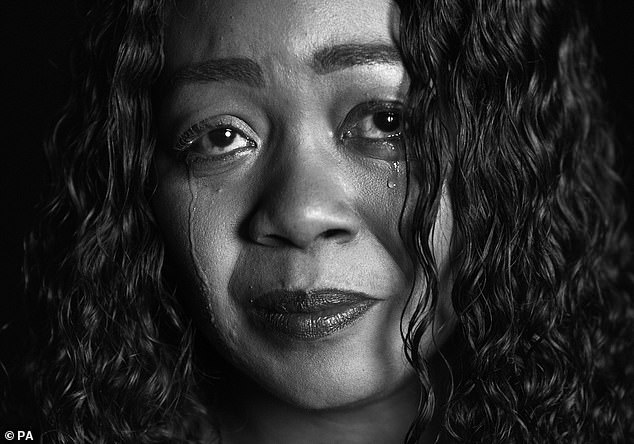 Five mothers of London stab victims (pictured: Lorraine Jones, whose son Dwayne Simpson was fatally stabbed in 2014) have relived the heartbreaking moments they had to tell family and friends about their devastating loss 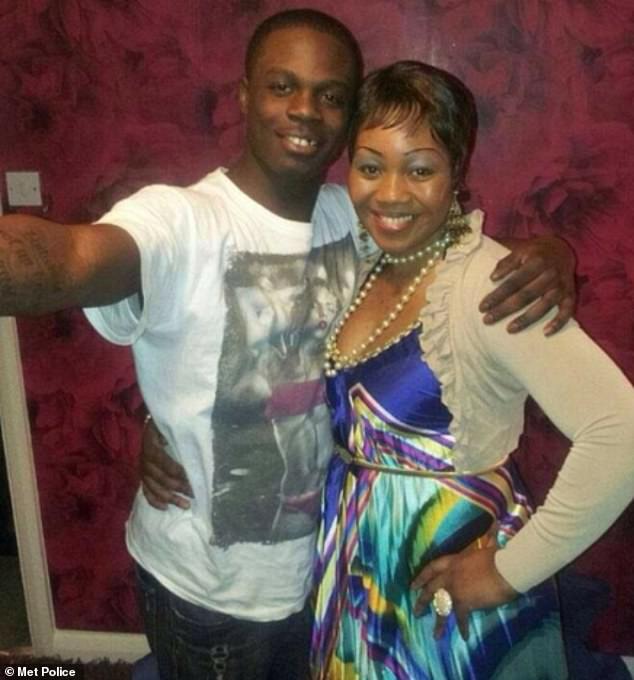 Dwayne Simpson was stabbed to death in Brixton in 2014, at the age of 20, as he attempted to protect another man from an attack 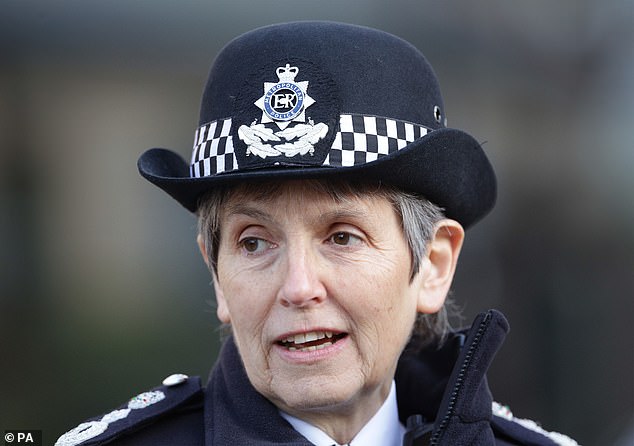 The Hard Calls Save Lives campaign is being run by charity Crimestoppers and is being supported by the Met Police (pictured: Commissioner Cressida Dick)

Speaking about the launch of the new campaign, Met Police Commissioner Dame Cressida Dick said: ‘Making that one call could literally save the life of someone’s son or daughter.

‘It felt like I was in another world’: Lorraine Jones relives the heartbreaking call after the death of her son Dwayne

‘Dwayne had a brilliant sense of humour, but he was also very sensitive. My passion is feeding the homeless and Dwayne was my right-hand man.

‘He’d set up the kitchen, make the sandwiches, help do the soups, and pack the stuff in the car.

‘I had 20 wonderful years with him, and really good memories. But I didn’t realise the impact he had until he passed away.

‘I’d just come back from a busy day when the door rang. It was one of Dwayne’s friends.

‘I just started running but I couldn’t run fast enough. I was helpless and weak. My feet were like lead and I was shaking.

When I got there I said, “I’m his Mom” and I pushed through. What I saw was horrific. Every time I speak about it, I need therapy afterwards.

‘His clothes were ripped, and Dwayne was lying in his own blood. Just so much blood. That’s my child and there’s nothing I could do to help him.

‘I kissed his forehead and the top of his cheek. I was kissing his feet, saying, “You’re not alone, I’m here with you. Do you know I love you?”

‘Later, a young lad came forward and said that a guy had been going to attack him and Dwayne came to help. He stood in the middle.

‘This young lad saw the guy take out a sword and stab him, and it went right through his heart. The lad was so grateful that Dwayne had come to help.

‘I wouldn’t expect anything different from him.’

*Rio Julienne-Clarke, 21, was jailed in 2020 for 12 years for the manslaughter of Dwayne Simpson.

‘We understand this is a difficult thing to ask – but you don’t have to name names and even a small piece of information could be vital.’

Becky Beston, whose son Archie Beston was 19 when he was stabbed to death in Kingston in February 2020 on a night out with friends, told how she had to call a stranger about getting him embalmed.

‘You should never have to use those words with your son’s name. Ever,’ she said.

‘If somebody would have made that phone call, my Arch would be here now.’

The campaign features short films of the mothers’ stories along with adverts on radio, websites and social media and is targeted at people in areas affected by violent crime.

It is particularly aimed at inspiring women – mothers, sisters, aunts – whose children, siblings, nephews or nieces may be on the fringes of knife crime to make a report if they know someone who carries a knife or where a weapon has been hidden.

Lillian Serunkuma, whose 15-year-old son Quamari Serunkuma-Barnes was knifed to death outside his school gates in 2017, recalled calling her aunt to let her know he had been stabbed.

‘She just screamed. That was the hardest thing about that day,’ she said.

‘It can be hard to make the call to say someone is involved in knife crime, especially if it’s someone you know or love. But it’s so much harder if you don’t.

‘It’s almost as bad to lose a child or a friend to prison as it is to lose them if they’re killed. Either way, they’re going to suffer as a result of knife crime.’

Yvonne Lawson, whose 17-year-old son, Godwin, was stabbed to death in 2010, said she rang her sister after she was told he had died.

She said: ‘I just kept repeating ‘died, died, died’. Godwin was stolen away from us in such a terrible way.

‘The least we can do is use his memory to change lives.’

And Jean Foster, whose son Christopher Foster, 34, was stabbed to death outside a London pub in 2010, said: ‘They told me Christopher had been murdered.

‘We called nine or 10 times. Slowly, we came to the realisation that he was never going to call back.

‘People may think that keeping quiet keeps you out of their focus, but it empowers them. No one is safe if we keep quiet.’ 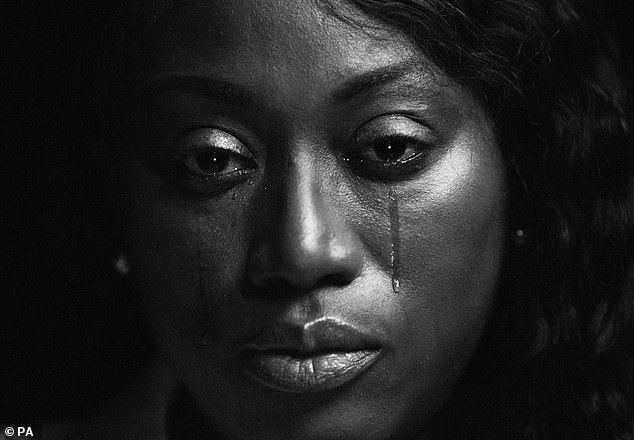 As part of a new campaign aiming to tackle knife crime in the capital, the mothers (pictured: One of the mothers Yvonne Lawson) recalled the ‘hardest calls’ they had to make following the tragic deaths of their sons Jean Foster (pictured), whose son Christopher Foster, 34, was stabbed to death outside a London pub in 2010 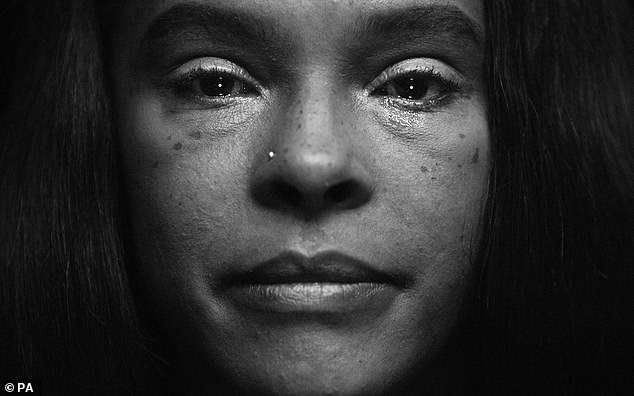 Lillian Serunkuma, whose 15-year-old son Quamari Serunkuma-Barnes was knifed to death outside his school gates in 2017, recalled calling her aunt to let her know he had been stabbed 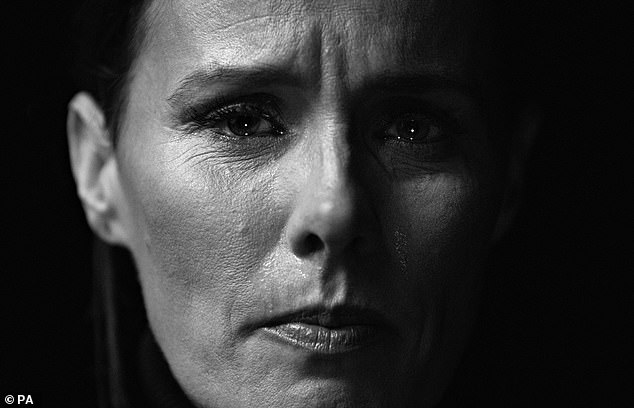 Becky Beston (pictured), whose son Archie Beston was 19 when he was stabbed to death in Kingston in February 2020 on a night out with friends, told how she had to call a stranger about getting him embalmed

Dame Cressida praised the ‘strength and courage’ of the mothers ‘who have relived the traumatic calls they had to make in hope that it will prevent other families suffering as they have’.

Crimestoppers chief executive Mark Hallas added: ‘Hearing the mums speak in such an honest, frank and heartfelt way about losing a son to knife crime is incredibly humbling.

‘I truly admire their courage and determination to warn others in their own words about the danger of not speaking up.’

The new campaign comes as it was revealed in February that knife crime offences have doubled in just six years to go above 50,000 for the first time since records began.

The Office for National Statistics (ONS) said that offences involving knives or sharp instruments rose by six per cent from 47,388 to 50,019 in England and Wales in the year before the first Covid-19 lockdown was imposed.

However, NHS hospitals in England reported an eight per cent fall in admissions for assault by a sharp object between April 2019 and March 2020.

The ONS also found that homicides have risen seven per cent to 695 offences including the Grays lorry incident with 39 homicide victims in the same period.

Recent figures also show that knife crime soared by 25 per cent after the first lockdown was eased last summer and have sparked concerns of an ‘eruption’ of violence once current Covid-19 restrictions are lifted.

According to figures released earlier this year, the Metropolitan Police investigated 126 homicides in London, compared with 150 in 2019 and 133 in 2018.

‘We kept ringing him hoping it wasn’t true: Jean Foster recalls moment they were told her son had been stabbed to death outside pub

‘Chris used to say about his daughter, “From the moment I saw her, I fell in love with her.”  She had been after these Barbie dolls.

‘After he was murdered, we cleaned out his flat and he had 3 Barbie dolls wrapped up in Christmas paper, ready to bring down to her. He was a good father.

‘The last time I saw him was the weekend before -his flatmate’s girlfriend had given birth and he said, “Mum, I’m going to see the baby Saturday and then I’m going to come later.” 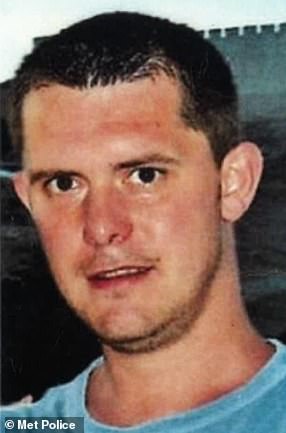 ‘So we were expecting him Saturday afternoon. But he never came. He was just having a pint with his mate.

‘Who would think? You’re eight minutes in a pub and you’re stabbed in the back and you never return.

‘We were in bed when the police knocked. They told us Christopher had been murdered.

‘The first person we called was Christopher. The phone rang and rang and every second felt like a minute.

You think pick up, pick up. You think it’s 4am, maybe he’s asleep. I must have called 9 or 10 times -could have been more. No answer, put the phone down, ring again.

‘Your brain’s fighting reality. Come on Chris. If he picks up, it’s all a mistake. This will all be a dream. Just pick up.

‘One part of you is saying, “Oh my God, he’s been stabbed and murdered”, and the other parts going, “No, it can’t be right.” You can’t grasp that the police don’t come around for nothing.

‘You finally put the phone down. You think “He’s going to call me back.” Then you slowly come to the reality that this is true. This is reality. We never went back to bed.

‘We carried on as normal because we had Chris’s daughter to stay. I had to tell her that Daddy wasn’t coming home.

‘When I told his daughter, her screams were horrendous. They haunt me to this day.

‘We tried Chris again later that morning. I was in denial until I saw him in the morgue.

‘You cannot imagine what it’s like unless you go through it.

‘That night, Chris was having a pint when he went out to take a phone call. As he came back you could see figures behind him on CCTV, but he had no interaction with them. The second one put the knife in.

‘We need to put protecting our children above protecting people who use knives.

‘People may think that keeping quiet keeps you out of their focus, but it empowers them. No one is safe if we keep quiet.’

*Aytach Lisani, 33, pleaded guilty to murdering Christopher Foster, 34, in 2014 and was jailed for life with a minimum term of 23 years.

Three other men pleaded guilty to conspiring to cause grievous bodily harm. Rocky Djelal, 34, of Layard Road, Bermondsey, was jailed for six years, Billy Dove, 30, of Setchell Way, Southwark, for six and a half years and Ali Lisani, 38, of Nevendon Road, Basildon, for seven and a half years.