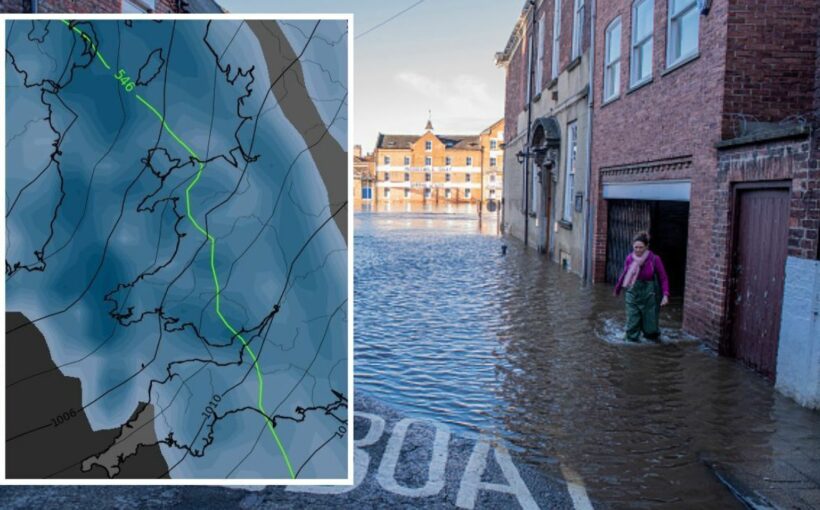 Scores of flood alerts and warnings are in place across Britain as a large band of rain pushes east across the country. The Environment Agency covering just England has 29 flood warnings in place and 90 alerts. They mostly cover areas near rivers where water levels are high and rising. Officials are constantly monitoring the situation, but prolonged rainfall could cause issues in parts of the country where the ground is already saturated. The Met Office also has a yellow weather warning in place for rain, covering Wales and north western parts of England until 8pm today.

In Wales, there are 20 flood alerts active, put in place by Natural Resource Wales. In Scotland there are five. The Met Office says: “Outbreaks of rain will spread across England and Wales during Tuesday.

“This will be heaviest and most persistent across parts of northwest England, particularly over higher ground. Rainfall totals of 60-80 mm could accumulate over parts of Cumbria.”

The warnings from the Met Office cover large parts of Wales, parts of north western England, and some parts of the Midlands. It warns drivers of flooded roads, surface water and some delays to public transport.

Mid and West Wales Fire and Rescue Service has also issued its own warning, urging people not to swim outside and to keep safe along coastlines. It comes after the body of a woman was recovered from a river in Glynneath, in Neath Port Talbot, Wales, at the weekend.

A second woman is still missing, WalesOnline reports, after an incident at Ystradfellte Falls in the Brecon Beacons.

The fire and rescue service says: “Following recent heavy rainfall, with further weather warnings issued by the Met Office, we want to take this opportunity to stress the importance of keeping safe when near water – especially rivers and floodwater.

“The popularity of outdoor water-related activities, such as open water swimming and stand-up paddleboarding, has grown in recent years.  However, the service urges people to avoid taking part in such activities following recent spells of heavy rainfall and during a weather warning.

“The risks of entering open water include strong currents and cold-water shock, as the temperature can be much colder than anticipated, especially in fast-flowing sections.”

The advice also stretches to dog walkers, with owners asked to keep their pets on leads and to try and keep to daylight hours only. It continues: “The service also urges people to avoid visiting popular water beauty spots and if you are walking near water, keep dogs on their leads, time your walks to make the most of the daylight and always keep back from the edge.

“When driving, you may encounter standing water without much warning which can present a real danger of aquaplaning.  Never enter flooded roads, the water can often be deeper and faster-flowing than you may realise.”

The Environment Agency says people living in some areas may have their basements flooded. In an alert it says: “Flooding of roads and some vulnerable properties is possible. Residents may experience inundation of basements, septic tanks and sewer systems. If you have a pump, make sure it is working and switched on.”

Flood warning areas are highlighted in red on maps by the Environment Agency. The warnings are more severe than the alerts as they urge people to act rather than prepare.

By doing so, people are urged to move family and pets to safety, get vehicles to higher ground, move important items upstairs – including cherished objects and furniture, and to use property protection products immediately.

Weather maps show no relent from the wet and windy weather this week, with Wednesday night seeing a return of heavy and persistent downpours. The Met Office adds in its outlook for the rest of this week that these conditions are here to stay.

It says: “Sunny spells and blustery, heavy showers, frequent in the west and perhaps merging into a longer spell of rain across southern Britain during the afternoon on Wednesday.”

Then from Thursday into the weekend it continues: “Unsettled with rain or showers, heavy at times in the west. Strong winds with the risk of gales or severe gales. Mild in the south, becoming colder in the north.”

The only break in this unsettled theme could arrive by the middle of January, but calmer conditions will be caused by colder Arctic air and a chance of some snow flurries.