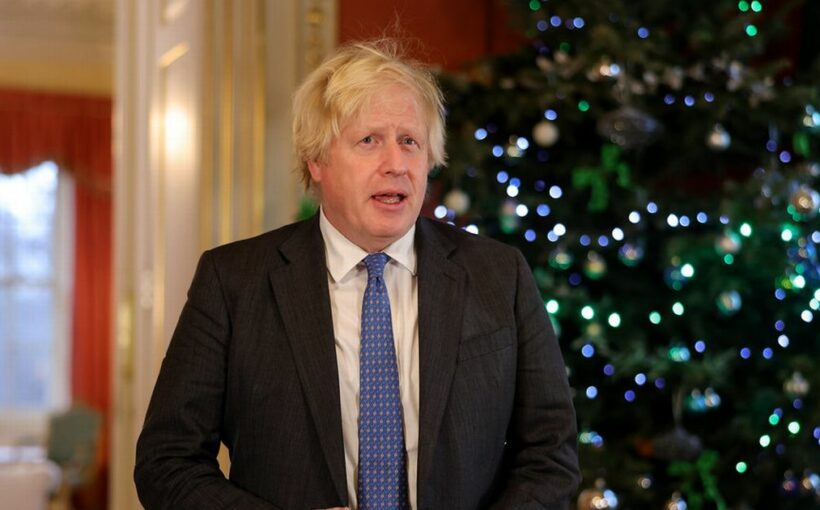 Important ministers are set to have a crucial meeting on Monday to discuss whether to impose fresh Covid restrictions to curb the spread of the deadly Omicron variant.

Prime Minister Boris Johnson has repeatedly stated that he will not hesitate to act after Christmas if further measures are required to curb Omicron.

However, Mr Johnson may face a lot of challenges at the meeting with the ministers, as he faces pressure from many directions, the Mirror reports.

Given that he’s at an all-time low in his premiership, Mr Johnson will have to decide whether to bow down to rebellious Tories calling for an end to all restrictions or to listen to scientific advice that calls for tougher measures.

The PM may bend to rebellious Tories' calls for no more restrictions. Or he may follow the advice from Government scientific advisers calling for tougher measures.

Some scientists have long been calling for a circuit breaker lockdown, with Independent Sage saying it needed to be rolled out before Christmas for it to have any effect on curbing Omicron.

Sage scientists published some research that outlined the need for stricter measures.

Data released by the UKHSA on Thursday looked fairly optimistic, which may steer the procrastinating PM to introduce tougher guidance.

If the statistics shared in tomorrow’s meeting appear somewhat optimistic, ministers may call for no restrictions to be introduced for the time being.

As we await to learn when the next Covid-O meeting will take place, we look at the possible measures the PM could introduce this week…

What are current Covid measures in England vs the rest of the UK?

England is the only nation in the UK that has not rolled out new Covid measures on Boxing Day or December 27.

In Wales, a maximum of six people can meet in pubs, cinemas and restaurants.

People in Northern Ireland will no longer be able to attend indoor standing events, and nightclubs are set to close.

From Monday, nightclubs will be shuttered and hospitality businesses will need to return to offering only table service if serving alcohol.

Bars, restaurants and indoor leisure facilities such as gyms, theatres and museums will also have to reinstate one-metre social distancing regulations.

In England, compulsory masks in confined spaces are required, alongside proof of vaccination or negative tests required to enter large events and nightclubs.

People with confirmed Covid must isolate for seven days.

If the PM invoked Covid “Step 2” restrictions Brits could see a return to the rule of six outdoors and indoor gatherings.

The curbs that were in place in April saw people unable to mix with another household indoors.

Bars, pubs and restaurants would only be able to serve outdoors.

Before you dismiss such an idea, it’s been revealed that top scientists have been modelling the impact of such measures on Omicron.

Experts from the Scientific Pandemic Influenza Group on Modelling, Operational sub-group (Spi-M-O) based their study on introducing the measures on December 28 or New Year’s Day and keeping them in place until January 15, 28 or March 28.

In a summary of its findings, the Spi-M-O said: “A reduction in mixing equivalent to half that of Step 2 results in only a very small reduction in severe outcomes compared to Plan B alone.

The modelling has not yet been handed for ministers to consider.

Circuit breaker lockdowns are restrictions enforced over a short period of time to delay the spread of Covid.

Experts hope these types of measures will reduce Covid cases down.

December 28 is understood to be the earliest possible start date for this type of lockdown.

If used, you can be certain officials are hoping it will reduce the pressure on the NHS.

The PM is still banking on his booster programme, especially after encouraging Brits to get the jab even on Christmas Day.

He told Times Radio: The numbers are a cause for concern. [But] the hospitalisations are different than they were… the autumn before when we called for the circuit break."

He added: “The government needs to get a grip, needs to come up with a plan.

“We will look at it just as we did last week with Plan B, if we think it's the right measures then we will then support it.”

Fears have been growing that a Covid 'Plan C' could be enacted straight after Christmas.

The minutes say: “The earlier interventions happen, and the more stringent they are, the more likely they are to be effective.”

“Earlier interventions can produce the same or greater effect at lower stringency and applied for a shorter duration than interventions that come late.”

So in line with their advice which would enact a Plan C, the Government could reintroduce table service at pubs, bars and restaurants to avoid crowding.

They could also reintroduce the need for Brits to check-in at venues, using the NHS COVID app.

Schools may be shut down, despite Nadhim Zahawi’s efforts to avoid this.

The Government could take a different approach of shutting elder classes in secondary schools first, before considering disrupting primary education.

Professor Christina Pagel, the director of University College London’s clinical operational research unit, said the PM should act as soon as possible, instead of waiting for more definitive evidence.

She urged ministers to “follow Sage advice and return to step two of the roadmap immediately to prevent thousands of infections over the coming days and then monitor the situation hour by hour so that measures can be lifted as quickly as possible, hopefully even in time to enable limited household mixing over Christmas weekend”.

The PM could be considering a full lockdown while monitoring the situation "hour by hour".

But it's very unlikely, given the number of rule breaches that took place in Downing Street last year, with many revealed by the Mirror.

Last week, addressing the nation in a pre-recorded message, Mr Johnson said: "We can’t rule out any further measures after Christmas – and we’re going to keep a constant eye on the data, and we’ll do whatever it takes to protect public health.”

But the likes of Professor Stephen Reicher, a member of the government’s Scientific Advisory Group for Emergencies (Sage), warn Omicron is “coming at us like an express train”.

Prof Reicher insisted that the government must give the public a “good, clear message” about how “serious the crisis is”.

A full lockdown could constitute a "clear message", but given the latest UKHSA data, it is unclear how necessary a full lockdown is.

It would be expected to last until pressure on the NHS significantly falls.

But this will be the last thing the PM considers given how many lockdown rules Downing Street officials broke last year.

In light of this, a Mirror poll found 77% believe other Brits will be less likely to follow Covid rules after the Christmas Party scandal.

Tory MPs are prepared to rebel on any prospect of new restrictions, with 100 alone rebelling over face masks and Covid passports for nightclubs.

Early analysis for the UK government revealed a person with Omicron Covid is “50 to 70% less likely to be admitted to hospital” than a person with the Delta strain.

Someone with the Omicron variant is also 31% to 45% less likely to attend A&E compared to Delta, the UK Health Security Agency said.

Tory rebels may use this as further evidence backing the need to stop rolling out further measures.

Graham Brady, chairman of the powerful 1922 Committee of backbench Tory MPs, told the Observer it was “time to move on from the lazy assumption that Government has the right to control our lives”, adding that Britons should “take responsibility for our own lives once again”.

Writing in the Mail on Sunday, Sir Graham said: "Even with new concrete evidence that the Omicron variant will not cause the devastation first predicted, there are very real fears that, if this year's Christmas has been reprieved, New Year could be cancelled instead. It must not happen."

When could they be enforced?

Parliament takes around two days to recall, so it could mean measures would not take force until around December 29 at the earliest.

December 27 and 28 are both bank holidays, which could slow down the process.