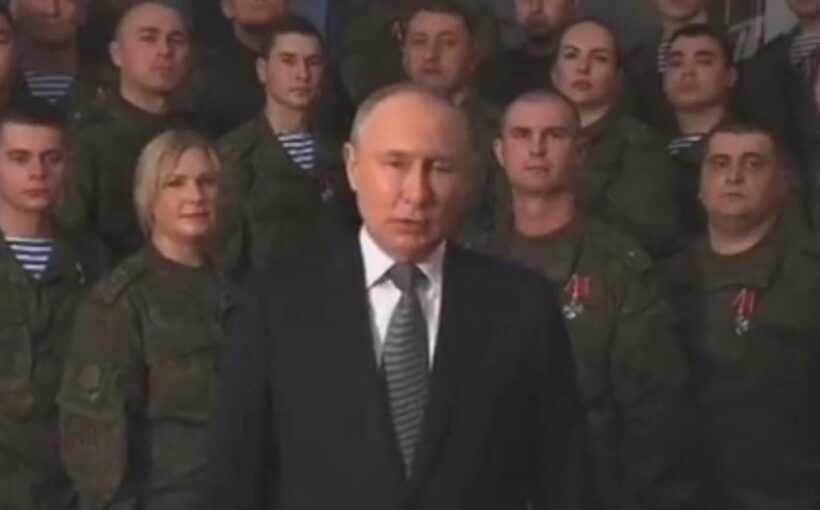 Vladimir Putin broke out in a coughing fit during his annual New Year’s Eve speech, sparking further suspicions his health is failing.

The Russian dictator appeared in front of Russian service people to make the monologue, meant to be a rousing message to the Russian people, but the power was sapped from it as he broke out in a coughing fit.

Rumours about his failing health have been ongoing for many months, with the 70-year-old often making public appearances looking worse for wear.

In a clip posted to Twitter by journalist Francis Scarr, part of Putin’s speech is shown in a seven-second clip in which he hurriedly clears his through three times, each time sounding like he has less control over it.

The speech, with people dressed in military equipment behind him, saw the autocrat make a rambling speech about the difficult year Russia had had and the hard decisions its leaders had had to make.

Once again, he promised victory for Russia over the “neo-Nazis” that Russian propaganda has attempted to create in Ukraine and claimed that the West was giving everything it had to use Ukraine as a tool to damage Russian sovereignty.

"The West lied about peace," he said. "It was preparing for aggression … and now they are cynically using Ukraine and its people to weaken and split Russia.

"We have never allowed this, and never will allow anybody to do this to us."

In the background, meanwhile, people were left miffed by a woman spotted alongside him in his speech.

With blonde hair, she looked extremely similar to a woman who appeared in the crowd at a church service photo opportunity with the Russian president.

She also seems to have been present on a fishing boat, presumably as a member of the crew.

She is also claimed to have been seen as a mother of a soldier in a publicity stunt.