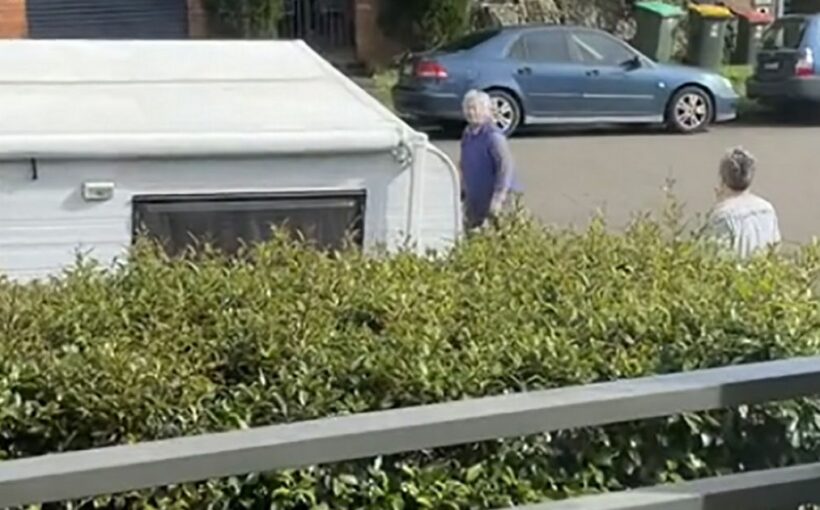 A pensioner was filmed having a foul-mouthed rant at her neighbour for parking their car on her side of the street.

Jess, who lives right opposite of the furious woman, shared the heated exchange on TikTok after hearing the loud commotion yesterday (Sunday, October 9).

The woman in purple T-shirt apparently complained of the caravan owner for parking their two other cars outside her property.

READ MORE: Homeowner horrified at neighbour's note left on doorstep when they got back from holiday

She is seen yelling from the stairway: "Now f***ing move your f***ing car, you bloody idiot! And I'm not doing anything that's amusing I'm telling you.

"I'm going to bring my husband's s*** and shove it over your caravan. Now move your bloody things.

"We've got a witness there and you have accused me of many things, on three occasions!

The pensioner slams the door as she goes back into her house.

Jess called her a "sweet lady" and clarified in another video that the penioner's issue is not about the caravan.

She added: "It's the blue car across the street 'blocking' her 'tiny' double garage."

The views were divided – some said the woman had the right to be furious while others said it's "a public street".

One viewer said: "Why can't people just be considerate? Just park on your side, pretty simple."

"Imagine you wake up seeing your neighbours taking up the whole street with caravan and cars, it's beyong a joke!" a second commented.

"I love her, move your caravan out of their way, common courtesey," a third added.

But some said the neighbour has not violated any laws as the cars are not blocking the garage.

A TikToker wrote: "She got a double garage, with plenty of room to drive it out of either way of the street with the caravan there, car parked on her side is legal."

And another shared: "She can't tell people where they park their cars, she has zero say about that even if she owns her property."