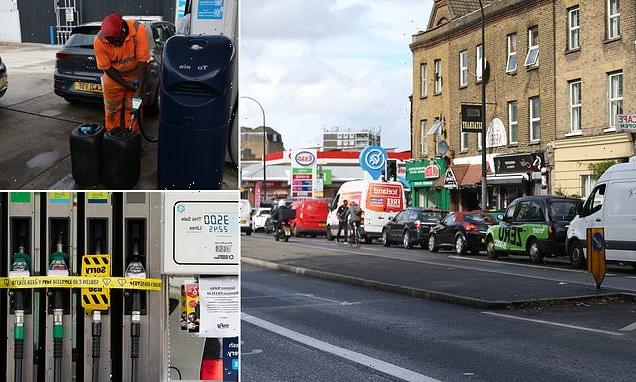 Hauliers warn fast-track trucker visas are ‘too little, too late’ to save Christmas – as DVLA has backlog of 54,000 HGV licence applications that will take at least two months to process

Hauliers have warned that fast-track trucker visas brought in the save Christmas are ‘too little, too late’ as the DVLA sets out to tackle a backlog of 54,000 HGV license applications that will take them at least two months to get through.

Boris Johnson tried to quell the panic-buying today as he claimed the fuel crisis is ‘stabilising’, and urged the public to ‘fill up in the normal way when you really need it’.

The Government is introducing a temporary visa scheme that will see 5,000 HGV drivers and 5,500 poultry workers brought in for three-month contracts in an attempt to quell the fuel delivery issues and supermarket shortages.

Transport Secretary Grant Shapps said that the plan would help bring an end to the ‘100 to 200’ shortfall of fuel tanker drivers, adding that ministers are planning to train an additional 4,000 lorry drivers with the help of the Army to reduce the ‘bottleneck’ in HGV driving tests.

But the Road Haulage Association’s (RHA) director for Scotland and Northern Ireland, Martin Reed, says the new visa plan was only ‘one of a number of levers that need to be pulled’ to get Britain out of the ongoing crisis.

He told The Scotsman: ‘The numbers that they are talking about will not make a massive dent in the issues that we have, in terms of shortages.’

And CEO of Scottish Food & Drink, James Withers, said: ‘We have been calling for emergency visas for weeks to avoid the collapse of some food supply chains.

‘I seriously doubt that 10,000 three month visas are going to cut it. It may help the driver situation a little, but it won’t address the chronic staff shortage in food production. At this stage, my instinct is that this is too little, too late to make a real difference to the Christmas trade.’

The DVLA now say there are more than 54,000 applications for HGV licences that need processing – but some are likely to be renewals. 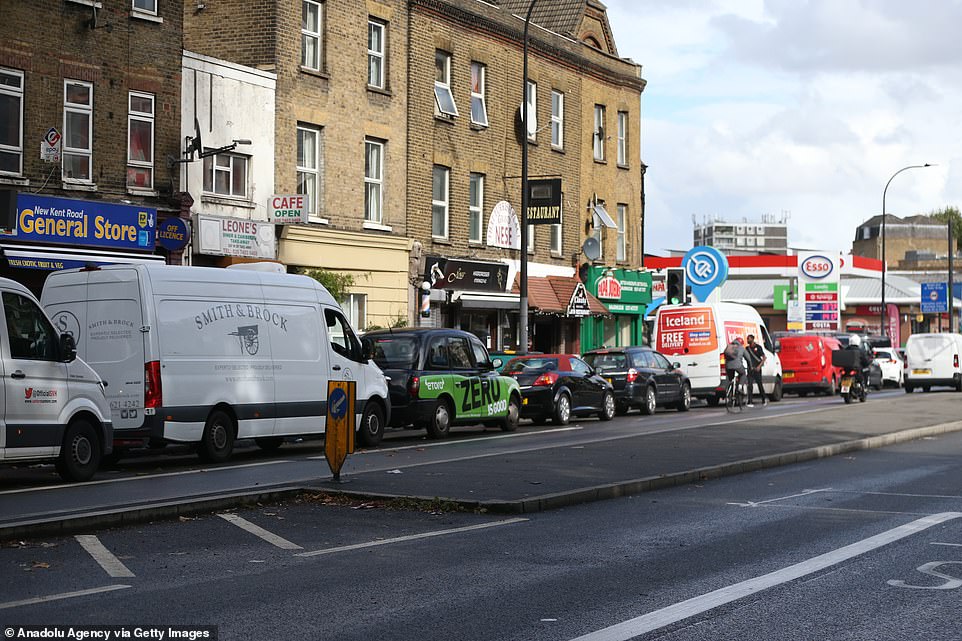 Cars queue for fuel at a petrol station in London, United Kingdom on September 28 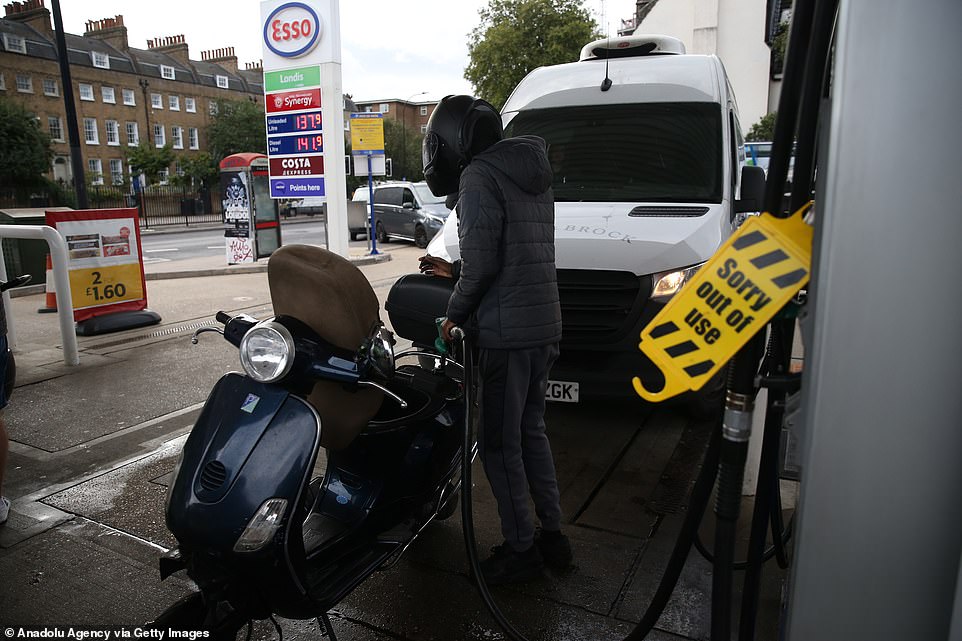 People fill up their vehicles with fuel at a petrol station in London, United Kingdom on September 28 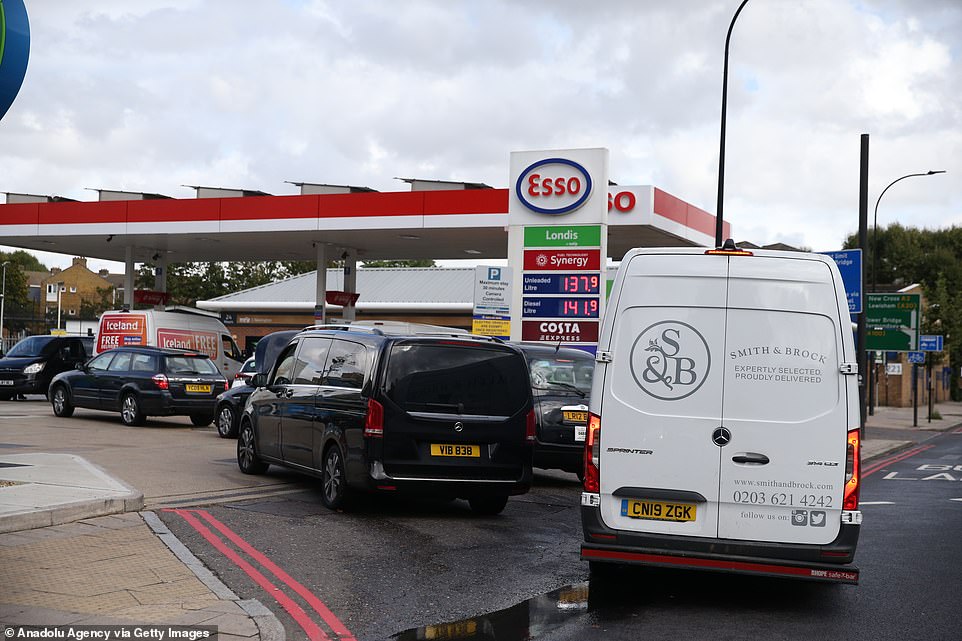 It comes after British drivers hunted for hours or sat in queues to fill their tanks with dozens of forecourts closed, adorned with signs saying they had no petrol or diesel

It comes after British drivers hunted for hours or sat in queues to fill their tanks with dozens of forecourts closed, adorned with signs saying they had no petrol or diesel.

A post-Brexit shortage of truck drivers, exacerbated by a halt to truck-driving-licence testing during COVID lockdowns and people leaving the haulage industry, has sown chaos through supply chains, raising the spectre of shortages and price rises in the run up to Christmas.

Britain put a limited number of military tanker drivers on a state of readiness to be deployed to deliver fuel if necessary. 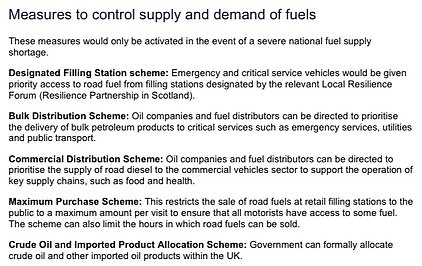 Rationing of fuel and filling stations just for emergency workers are the likely next steps in the crisis, Government documents reveal.

Under an emergency government plan (pictured), key workers could be given ‘priority access’ to a number of petrol stations.

The plan involves capping the amount of fuel drivers can buy and letting critical workers have ‘priority access’ to pumps.

Another option, the designated filling station scheme, could see ’emergency and critical service vehicles’ having priority access. This was done by Tony Blair’s government during the 2000 fuel crisis.

The document, published last year, reveals the Government’s next steps are:

Designated Filling Station scheme: Emergency and critical service vehicles would be given priority access to road fuel from filling stations

Bulk Distribution Scheme: Oil companies and fuel distributors can be directed to prioritise the delivery of bulk petroleum products to critical services such as emergency services, utilities and public transport.

Commercial Distribution Scheme: Oil companies and fuel distributors can be directed to prioritise the supply of road diesel to the commercial vehicles sector to support the operation of key supply chains, such as food and health.

Maximum Purchase Scheme (rationing): This restricts the sale of road fuels at retail filling stations to the public to a maximum amount per visit to ensure that all motorists have access to some fuel.

The scheme can also limit the hours in which road fuels can be sold.

‘We’re starting to see very tentative signs of stabilisation which won’t yet be reflected in the queues,’ Shapps told reporters.

‘The sooner we all return to our normal buying habits, the quicker this gets resolved – and I do appeal to the public to do that. In particular, no more water bottles at petrol stations: its dangerous and not helpful.’

Industry groups said the worst of the shortages seemed to be in London and other English cities where many gas stations remained closed. Fights broke out at some forecourts as drivers jostled for fuel and pictures on social media showed some people filling up old water bottles with fuel.

There have also been growing calls for medics, healthcare staff and other essential workers to be given priority to fill their cars to keep hospitals and social care services running.

An air of chaos has gripped the world’s fifth-largest economy in recent weeks as the shortage of truckers strained supply chains and a spike in European wholesale natural gas prices tipped energy companies into bankruptcy.

Retailers, truck drivers and logistics companies have warned that prices for everything from energy to Christmas gifts will have to rise.

‘I can’t believe it – it’s crazy,’ said David Scade, a 33-year-old delivery driver who drove for hours searching for fuel in London.

‘They keep saying there is no shortage but I suppose everyone is panicking now.’

The Petrol Retailers Association (PRA), which represents independent fuel retailers who account for 65% of all the 8,380 UK forecourts, said there were early signs the crisis was ending.

‘We have conducted a survey of our members this morning and only 37% of forecourts have reported being out of fuel today. With regular restocks taking place, this percentage is likely to improve further over the next 24 hours,’ said Gordon Balmer, the PRA Executive Director.

The government on Sunday announced a plan to issue temporary visas for 5,000 foreign truck drivers. But some Polish hauliers said that offer was laughable and that few would be likely to take it up, and the German freight industry said drivers who left after Brexit would not go back.

Hauliers, petrol stations and retailers say there are no quick fixes as the shortfall of truck drivers – estimated at about 100,000 – is so acute, and because transporting fuel demands additional training and licensing.

Ministers want businesses relying on truck drivers to pay more and offer better conditions, rather than count on cheap foreign labour. But hauliers and other businesses say that can only be a long-term fix, while in the meantime it will mean prices increasing and the risk of a prolonged rise in inflation.

Analysts cited concerns about the impact on the economy if fuel shortages persisted as a factor in sterling falling by more than 1% versus the dollar and the euro.

The British Retail Consortium (BRC) urged the government to broaden the size and scope of the visa scheme to attract the truckers needed to keep Christmas supplies on track.

‘It will take many months before there are enough new British drivers to cover the shortfall,’ said Andrew Opie, director of food and sustainability at the BRC.