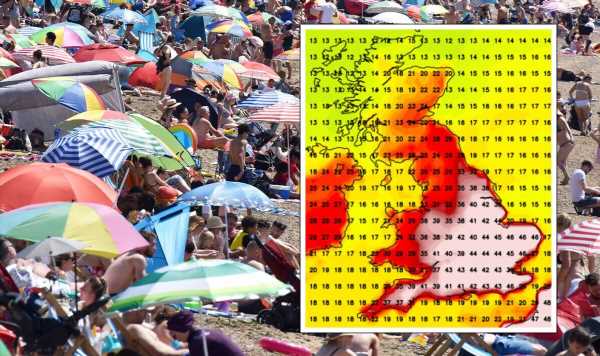 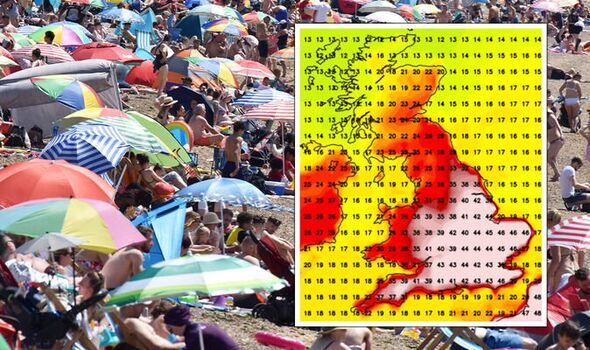 The elderly, vulnerable and very young are warned to take extreme care amid predictions for unprecedented heat. Some weather models warn a weekend surge will push thermometers to 43C, never before seen in the UK.

However, this is thought to be an exaggerated computer output with forecasters saying 40C will be ‘just out of reach’.

Fierce sunshine will push ground temperatures to 46C–hot enough to soften roads and fry an egg on a car bonnet.

Jim Dale, meteorologist for British Weather Services, said: “In the sunshine, with these sorts of temperatures you could easily cook an egg on the ground.

“This is because the ground retains the temperatures, especially after the warm dry spring and the hot weather we have already had.

“The ground will act a bit like a frying pan, and temperatures at ground level can rise much higher than air temperatures predictions.”

Blowtorch heat will be driven by an Azores High pressure system reaching across the Atlantic into Britain.

It will form a ‘heat dome’ over Britain, trapping rapidly warming air and forcing temperatures up through the week. 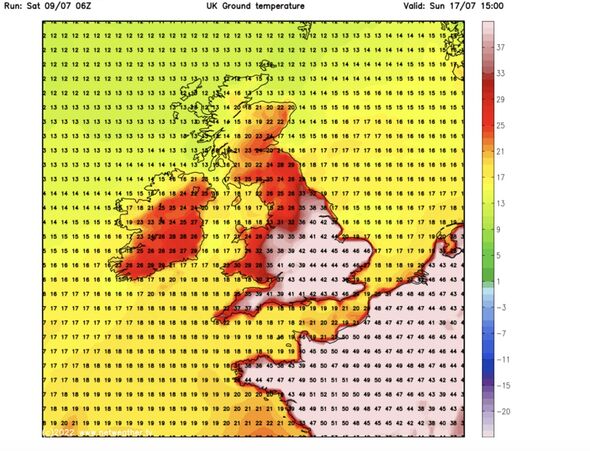 Weather charts show hot weather could hold out beyond the weekend with high pressure stubbornly wedged over Britain through the next 10 days.

The Met Office has issued a level-3 ‘heat-health alert’ across south-eastern Britain and a level-2 warning across the rest of the country.

A brief dip in temperatures on Thursday will give way for another surge ahead of the weekend, it warns.

Britons are urged to avoid alcohol, stay out of the sun, and close curtains to keep indoor temperatures down.

Met Office meteorologist Alex Deakin said temperatures will rise through the week before another surge ahead of the weekend.

He said: “Temperatures will be the big talking point of the weather for the next several days.

“They are set to rise through Monday as that high dominates and will be widely in the mid-20Cs across northern Britain.

“Further south we are likely to peak above 30C particularly across the southeast.

“There is the possibility we see an even hotter spell at the end of the week.”

Warm air will become flattened under a dome of heat pushing temperatures up by compression, he added.

“After that there is some uncertainty, there could be a dip before potentially seeing another rise.

“Some computer models are suggesting quite a big rise in temperatures towards the back end of next week.”

Forecasters agree Britain is facing another ‘heat surge’ ahead of the weekend which could push the mercury close to 40C.

Exacta Weather’s James Madden said: “There will be a big surge of heat next weekend, and this could push temperatures beyond the 35C-mark.

“40C may be just out of reach, but it would not be out of the question for temperatures to approach the mid- to high-30Cs.” 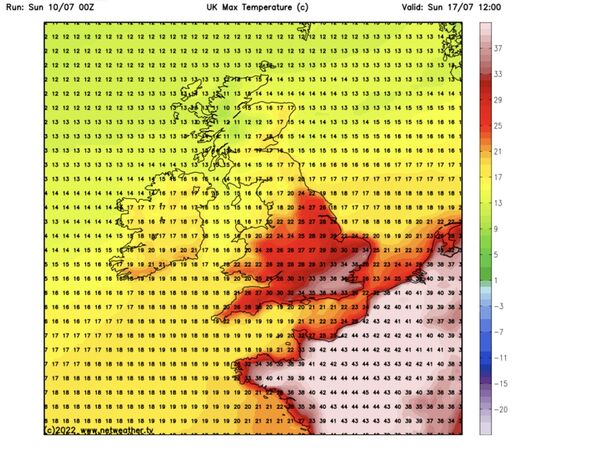 While most of Britain boils through the coming days, parts of Scotland will wonder what the fuss is about.

A cold front sinking across the far north of Britain will bring much lower temperatures and rain.

Weathertrending meteorologist John Hammond said: “More northern parts of the country won’t see such searing heat, and for western Scotland and Northern Ireland, it will be wet weather rather than warmth that people are talking about.”

Elsewhere, while 40C is unlikely, rocketing temperatures will bring the hottest spell of summer so far, he added.

He said: “Despite much rumour of Britain reaching 40C, temperatures are very unlikely to get that high.

“But in the southern half of the UK, they could reach the low- to mid-30Cs through the early part of this week.

“It is most likely that this week will bring the hottest spell of the summer.”