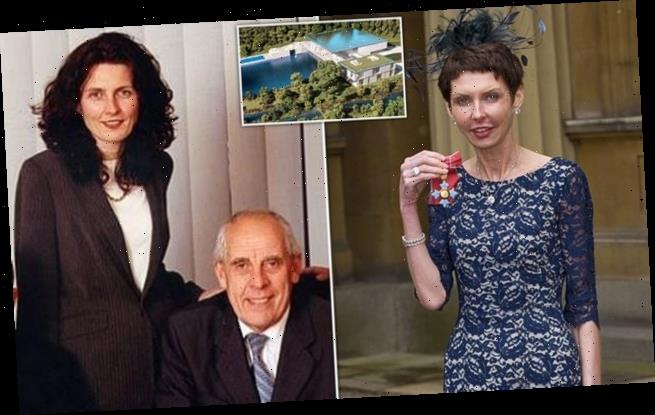 The bookie’s daughter from Stoke who hit the jackpot: How ultra-secretive workaholic mother-of-five Denise Coates, 53, became Britain’s best paid woman after mortgaging family business to set up Bet365 – and is using her £469MILLION salary to build a futuristic fortress

When bookmaker Denise Coates clicked on the eBay ‘buy’ button for the £25,000 domain name for her once Portakabin-based bookies, she may have wondered if it would ever pay off.

Two decades later as the 53-year-old workaholic boss of Bet365 it has and she has just paid herself £469million -the biggest salary in UK history.

Her lightbulb moment in 2001 – that the future of gambling was online – took her from that Portakabin to the brink of completing a futuristic fortress home in Cheshire.

As a teenager she learned the trade working in her father’s Stoke based Provincial Racing outlets but could see where the industry was heading.

She convinced him to use them to secure a £15m loan from RBS, which she poured into developing Bet365.

By 2006 it had become so successful she sold those branches to rivals Coral for £40million. 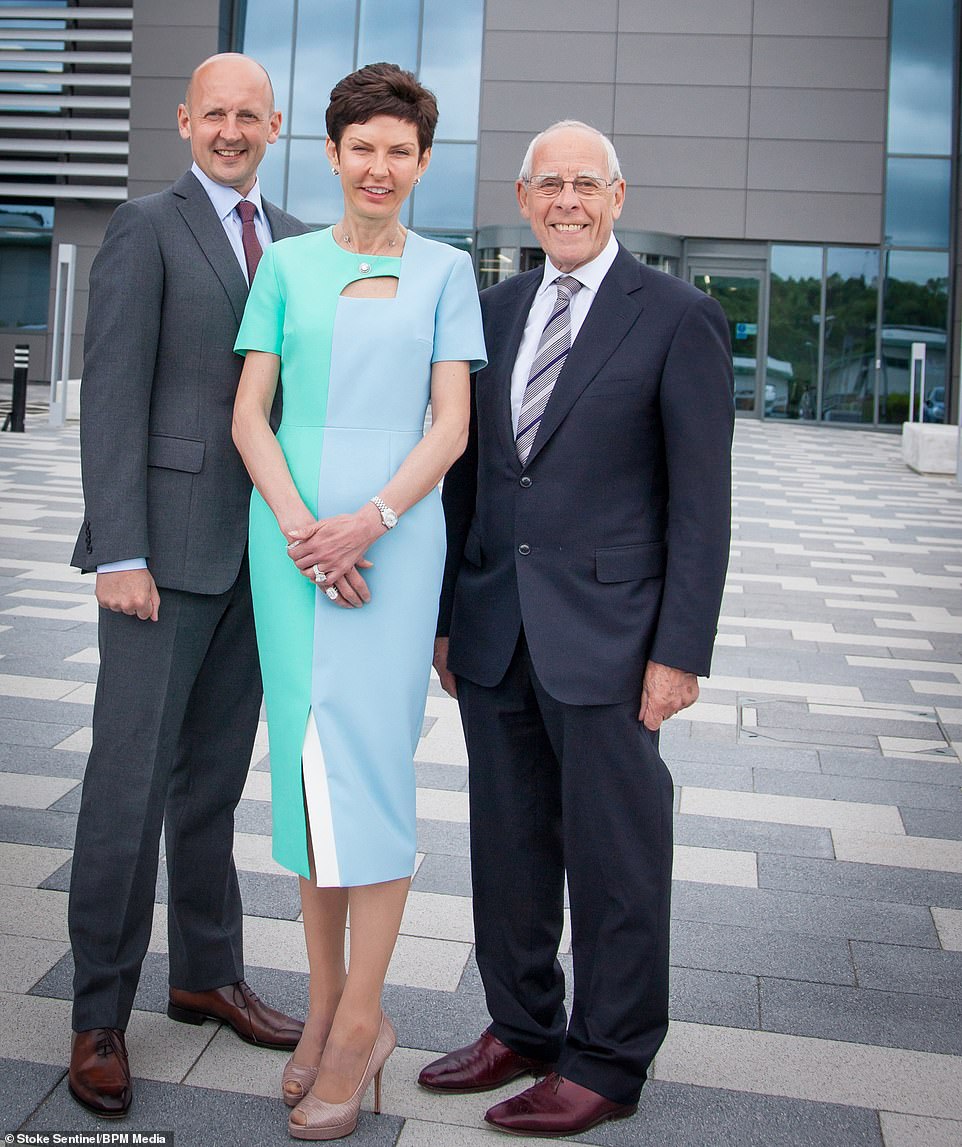 John, Denise and Peter Coates of Bet365, which has handed out £607 million to managers 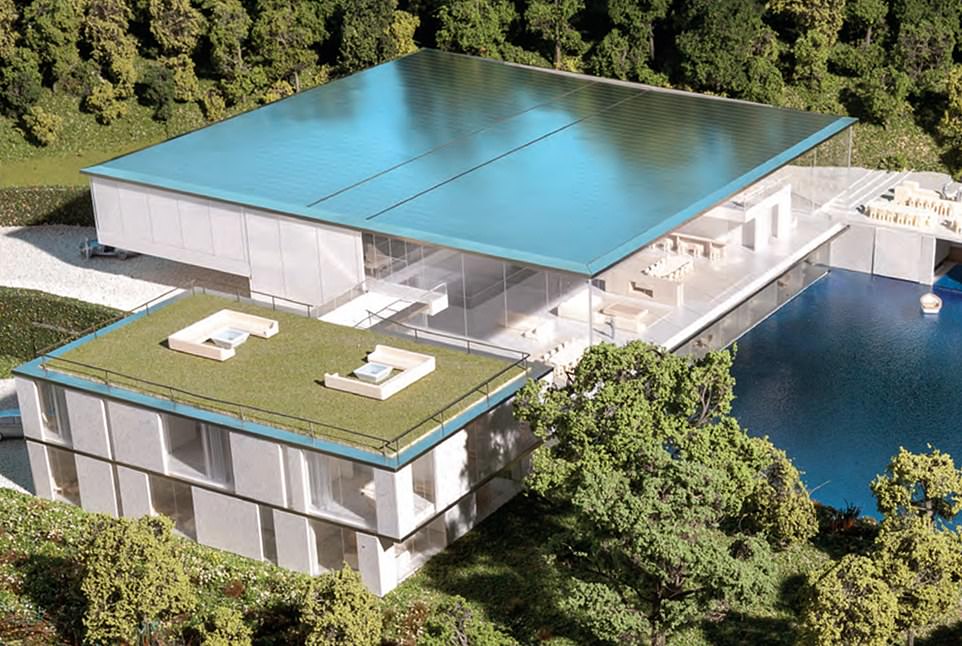 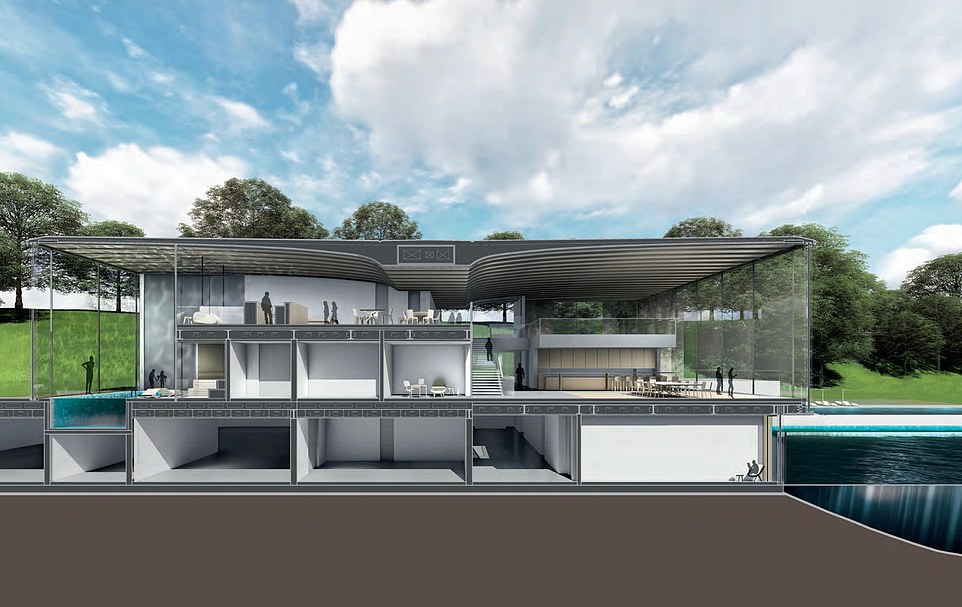 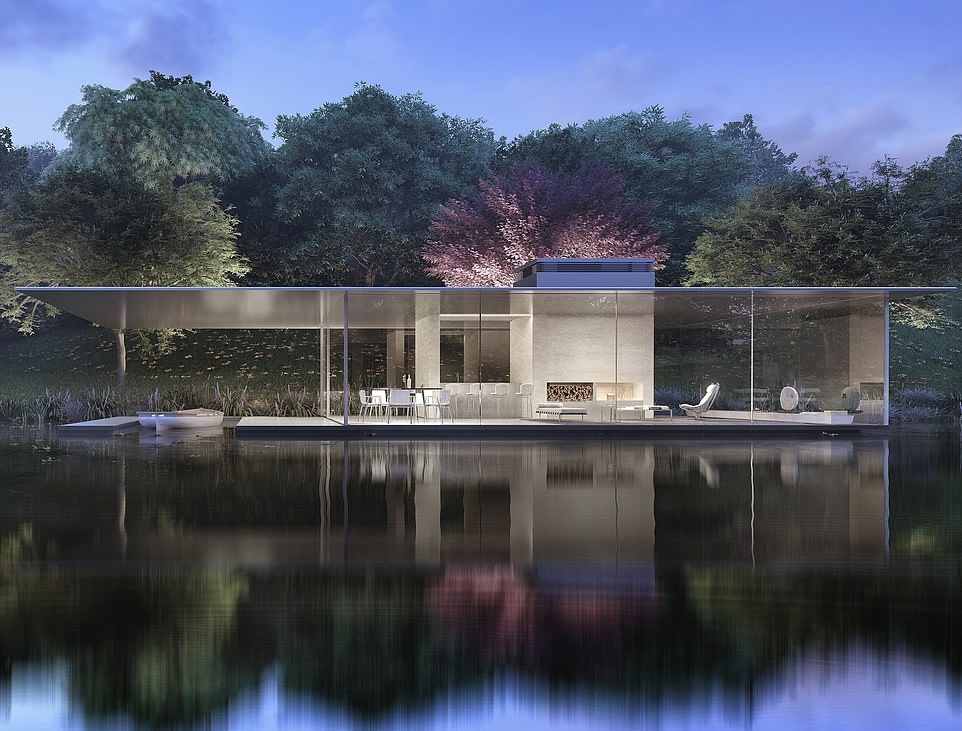 The futuristic glass home is complete with a 7,000 square metre artificial lake, a boat house, a sunken tennis court, stables, walled gardens, a cycle path and a glass lake house on the water (pictured) 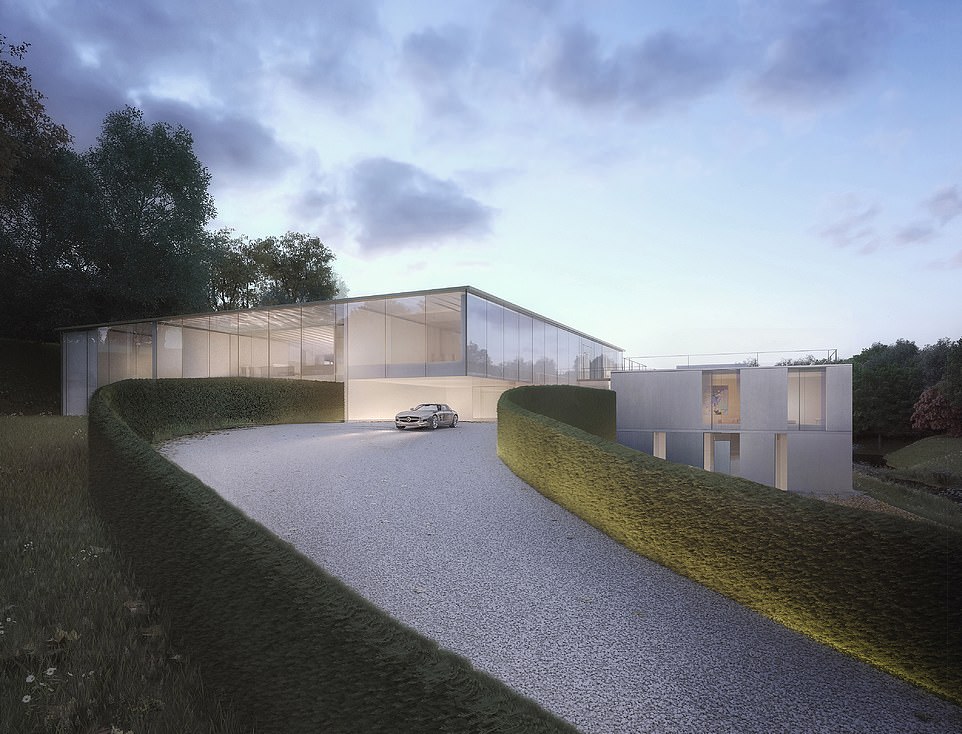 In December 2018 it was revealed that Ms Coates spent a staggering £5.5 million buying up hundreds of acres of farmland which surround her new space age home, snapping up 12 separate plots of land since 2014 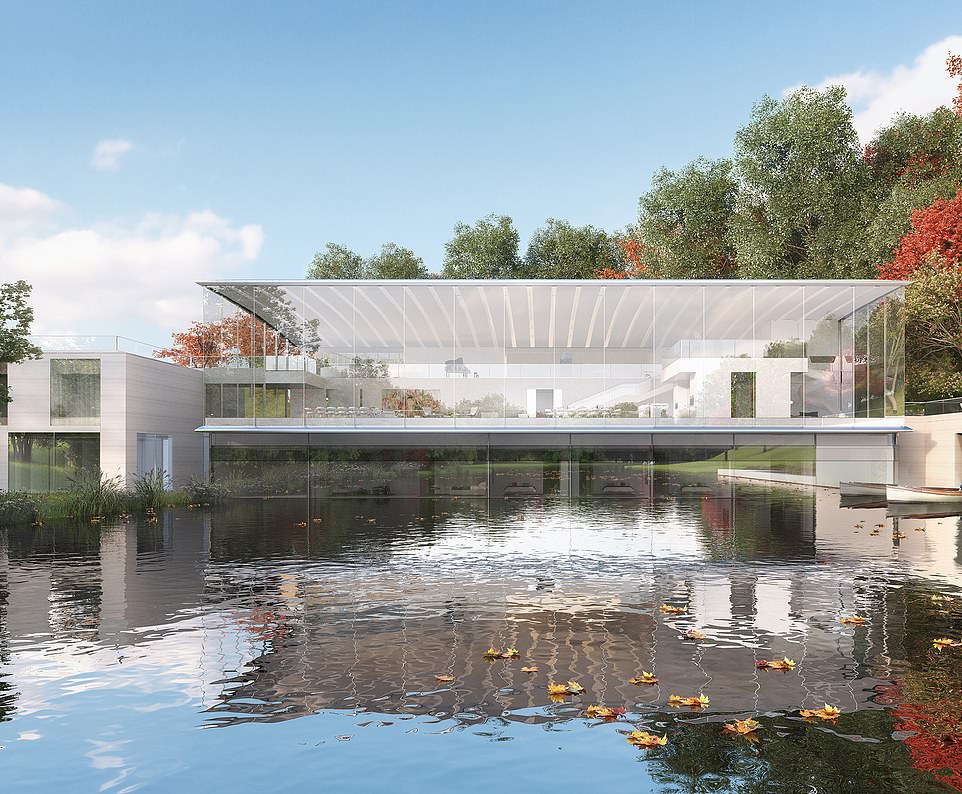 Concepts for the palatial property are found in the visualisation made by designers, which show a waterside paradise 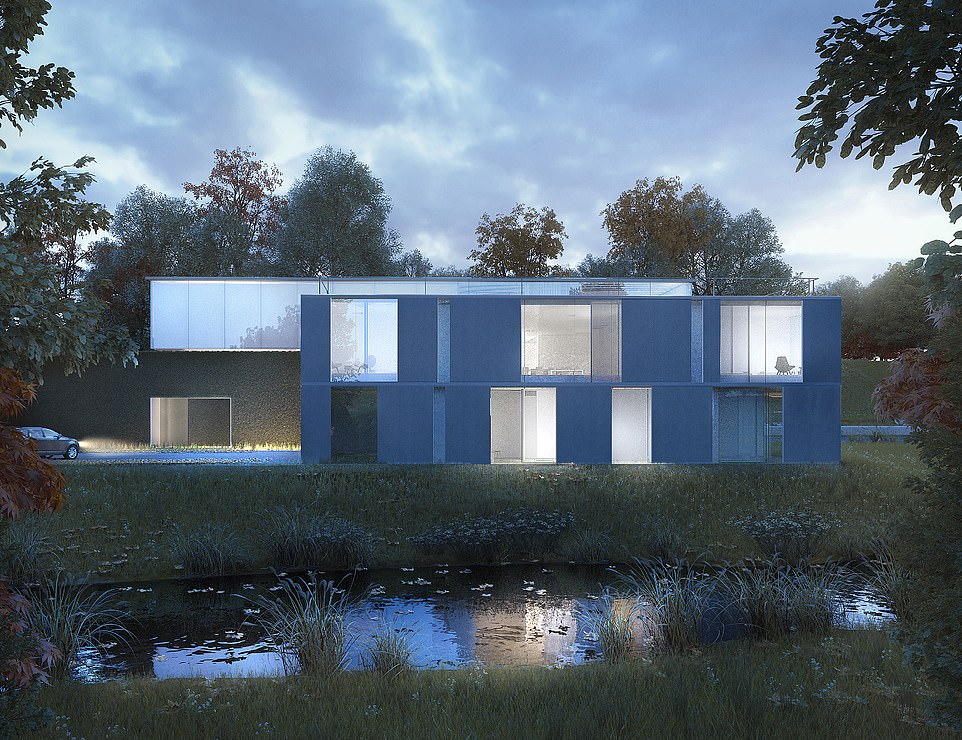 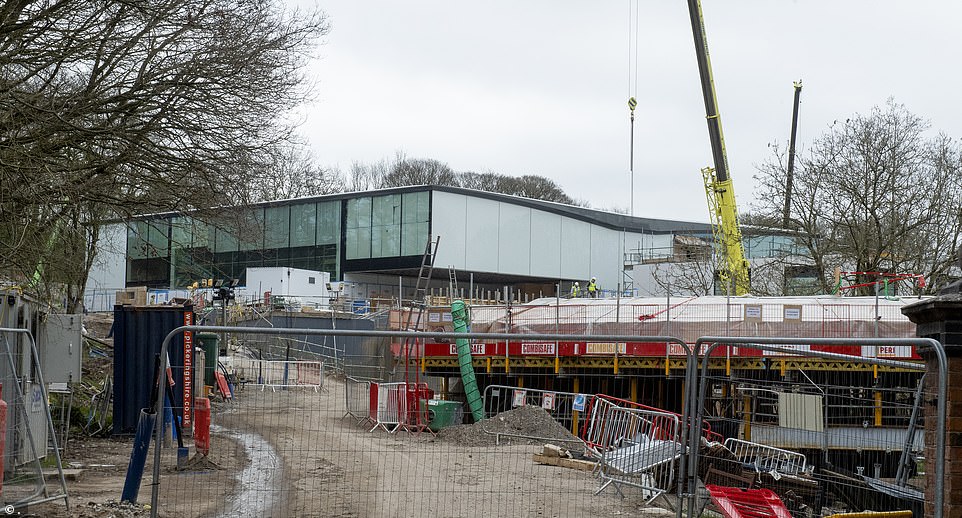 The incredible property is well underway and could be seen being built earlier this morning, already looking like its design

Her father’s faith in what was then a risky concept has never been forgotten by her.

In a rare interview she admitted: ‘I am hugely indebted to my father for always believing in me and to my brother John who runs the business alongside me.’

The success story nearly never happened after she first trained as an accountant, following study of econometrics at the University of Sheffield.

She hated it and was said to have ‘jumped’ at the chance to take over Provincial Racing.

One of her colleagues Debbie Tatton told the BBC in 2019: ‘When Denise came, she wanted a closer relationship between the staff and the customers.

The payday means that, between April 2019 and March 2020, she earned the equivalent of £1.3 million per day 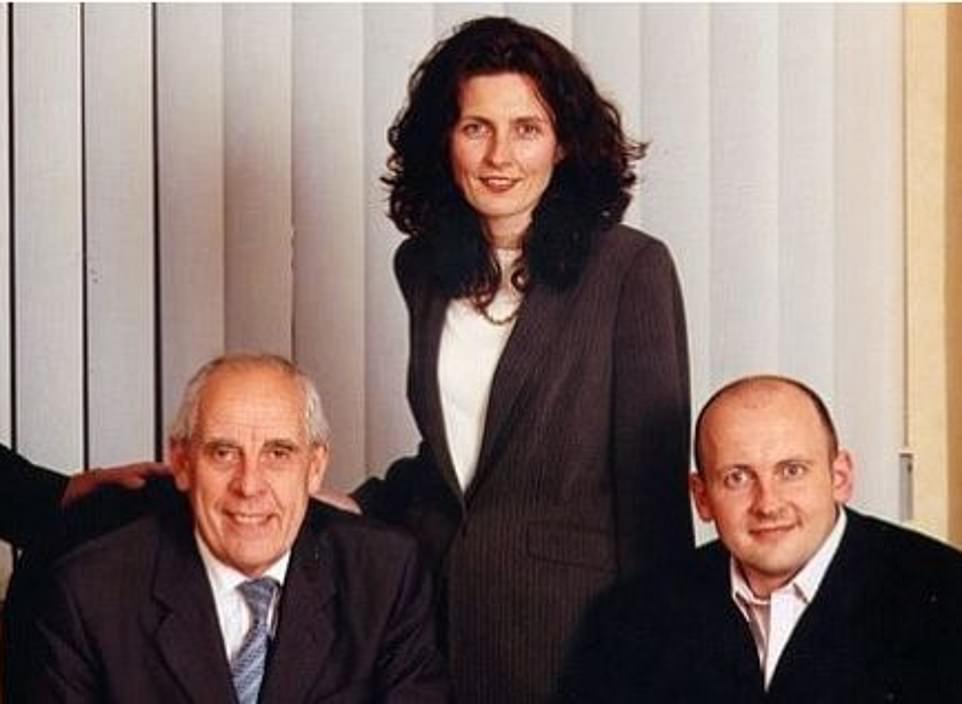 ‘A lot of younger people started coming in, as well as a lot more ladies.’

It was working in an office above one of the shops in Tunstall, Stoke, in the late 1990s that she had the idea for Bet365.

The chain was turned round into healthy profit under her stewardship and it was a car park near to one of the branches Bet365 was born.

Working from a Portakabin, Mrs Coates created the brand but at first did not succeed in the way she may have predicted.

One of the key decisions she made was to develop bespoke software, rather than using someone else’s for the business.

In the portable cabin in one of the shop car parks between Trentham and Longton the software development team began work. 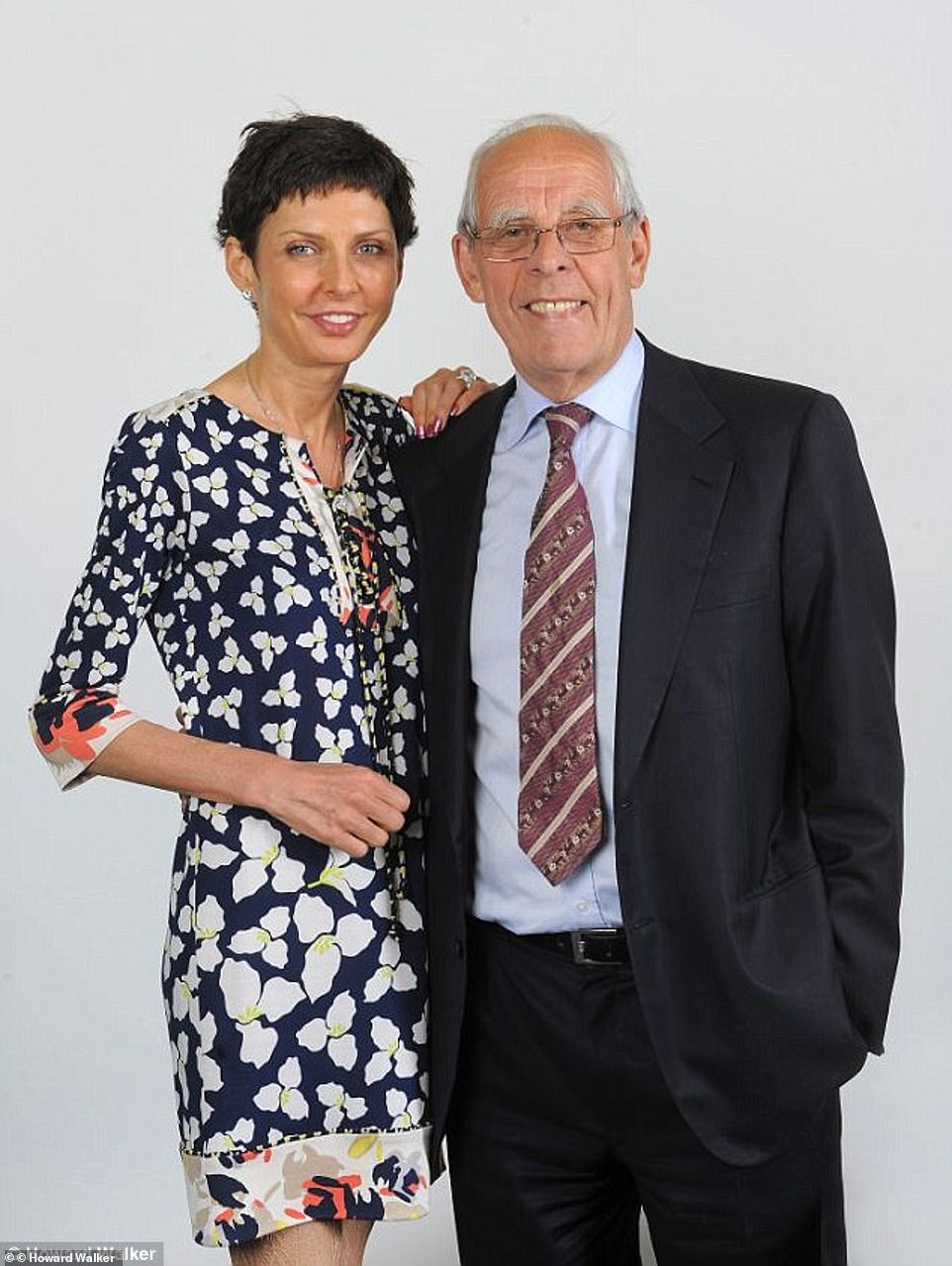 Mrs Coates pictured with her father Peter, who is also a director of her betting company

Good company! Bet365 boss is in top 5 richest women in the UK

Kirsten Rausing is the UK’s richest woman and has a fortune of £12.1billion.

Her money comes from the packaging firm Tetra Laval and she is the 150th richest person in the world.

She breeds horses in Newmarket and is a member of the Jockey Club and director of the British Bloodstock Agency.

Charlene de Carvalho-Heineken is the second most wealthy woman in the UK, thanks to her stake in beer firm Heineken.

She is worth £10.3billion and lives with Michel de Carvalho, a financier and director of Citigroup, with their children in London.

Mrs Carvalho-Heineken said she had to overcome shyness to become the business leader today, adding: ‘I am a very shy and retiring person. As a child, I was appalling – I wouldn’t look up.’

Marit Hausing only this year reached the third in the richest list, but in sad circumstances.

Her £12.1billion fortune came through inheritance after the death of her husband Hans.

She is the aunt of Kirsten Rausing and both of their money is connected to Tetra Laval.

Kirsty Bertarelli is the fourth richest woman in the UK with her £9.2billion fortune.

She is a former Miss UK and comes from the family that owned world ceramics firm Churchill China.

Mrs Bertarelli is married to Ernesto Bertarelli, an Italian-born Swiss businessman who was the owner of biotech giant Serono until 2007

Bet365 boss Denise Coates is the fifth richest woman in the UK and is worth £7.2billion.

She started working in bookmaking as a teenager when she worked in shops owned by her father, the son of a miner who made his fortune in the sports stadium catering business.

By December 2000 it had grown so big they moved to a base in Festival Park.

It is now a global leader employing 5,100 out of headquarters in Stoke-on-Trent and Gibraltar.

She told the Stoke Sentinel: ‘In the early years, the business was losing a lot of money and we were all concerned about having the resources to bring us through to profitability.

‘As part of this, we did a tour of the private equity and venture capitalist industry to try and bring in outside investment.

‘At the time, the dot com bubble had burst and a loss-making internet company wasn’t looking the best investment!

‘We had to mortgage the betting shops and sell other family assets to lend money to the business to take it through to profitability. As such we kept the business fully in our hands.’

In 2012 Mrs Coates was appointed CBE for services to the community and business awarded by Prince Charles.

The Coates family are now estimated to be worth around £6.8 billion, and Mrs Coates the UK’s 5th richest woman behind Marit and Kirsten Rausing, Charlene de Carvalho-Heineken and Kirsty Bertarelli.

Bet363 employs around 3,000 people and Miss Coates’ subordinates include her own husband, Richard Smith, who serves as group property director.

The pair met at Sheffield University, where she earned her first class degree in econometrics in the 1980s.

They adopted four girls from the same family a few years ago and they also have a child of their own, but they try to keep their home life well away from the limelight.

In an interview in 2013 she said: ‘I am very pleased with the decision Richard and I made to adopt the girls.

‘It has been hugely rewarding for both of us and has given us a great deal of pleasure.’

Yesterday it emerged she had increased her salary by 45 per cent, taking her total earnings since 2016 to £1.3 billion.

It is a pay packet more than all of the salaries of the chief executives of Britain’s 100 largest listed companies put together.

The money means they have been able to plan a sprawling home, set in 52 acres of Cheshire parkland, which includes an artificial lake, sunken tennis courts, as well as stables, ornamental gardens, workers’ cottages and a boathouse.

Her family are also said to use a helicopter, while Mrs Coates herself drives an Aston Martin DB9 sports car with customised licence plates.

But much has also gone to good causes, with Bet365 donating some £100million to charities, including Oxfam, CAFOD, the Douglas Macmillan Hospice, as well relief programmes to people affected by the Typhoon Haiyan in the Philippines.

The impact of the coronavirus pandemic has been feared to have contributed to Britain’s gambling problems.

In 2019/20 Bet365 pledged £868,000 to GambleAware, which collects donations for treatment and research, which is expected to rise to close to around £14million this year.

But regardless of differing opinions on the industry and its moral rights or wrongs, there can be little doubt how Mrs Coates’ business gamble has turned out. 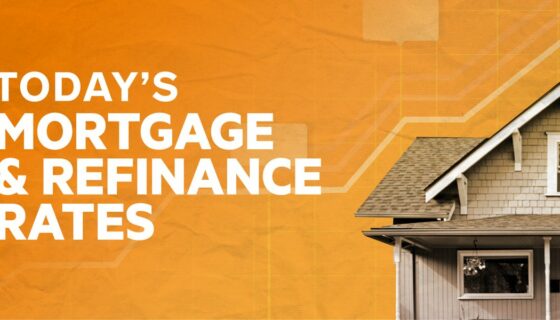