Home » How COVID WILL eventually decay and disappear 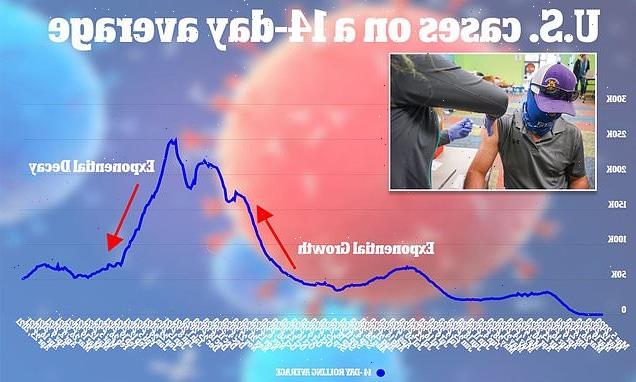 The math behind the end of the pandemic: How COVID WILL eventually decay and disappear and why a steep drop in cases does NOT mean the virus is approaching its end

A professor has explained the mathematical concept for why she believes the coronavirus pandemic may decline quickly in a new op-ed on Thursday.

Zoë M. McLaren, an associate professor at the University of Maryland in Baltimore County, wrote in The New York Times about the mathematical concept of exponential decay in relation to COVID-19.

‘The United States is still a long way from reaching herd immunity, but things could improve a lot before then. The worst of the pandemic may be over sooner than you think,’ McLaren wrote.

However, McLaren – who studies policies to combat infectious disease epidemics – said that just because there may be steep drops in cases does not mean that COVID-19 is approaching its end. 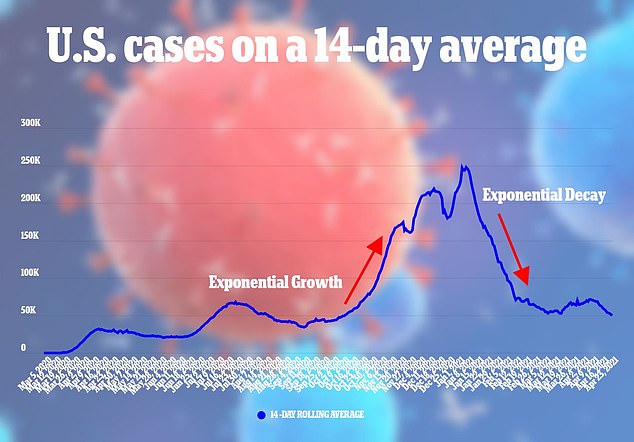 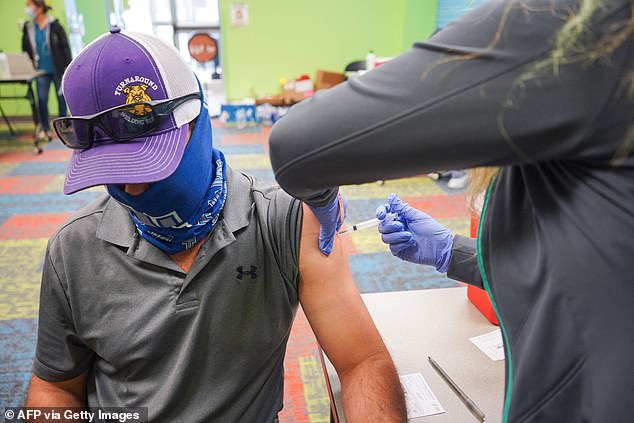 Zoë M. McLaren wrote that the mathematical concept of exponential decay shows how the virus may disappear soon

McLaren explained that ‘understanding exponential dynamics makes it easier to know what to expect in the coming phase of the pandemic.’

She wrote that the situation will ‘improve quickly as vaccination rates rise.’ There have been 243,463,471 doses of COVID-19 vaccines given in the United States as of Saturday, according to the Centers for Disease Control and Prevention.

McLaren stressed the importance of vaccines in getting the numbers ‘to plummet’ writing that ‘every case of COVID-19 that is prevented cuts off transmission chains, which prevents many more cases down the line.’

However, those declines slow down over time and cases would likely rise again ‘if people ease up on precautions too soon.’

But it took more than three times as long for daily cases to fall another 100,000, McLaren wrote.

According to the CDC, the current 7-day moving average of daily new cases is 52,528 marking a 79% decrease from January 8.

The concept of exponential growth and decay as applied to the coronavirus pandemic had already been explained in an article in March in Design News – a publication for the engineering community.

‘No virus can grow at an exponential rate forever. Virus growth is bounded by available resources, such as uninfected hosts, transmission medium, nutrients, water, etc. Still, the initial exponential growth of viruses do increase at an alarming rate,’ the outlet reported.

‘Fortunately, this type of infectious growth rate doesn’t continue infinitum. As the growth rate peaks and begins to fall, the curve changes from an exponential one to a normal distribution or bell curve … as the growth pattern begins to decrease.’

McLaren wrote that ‘reaching herd immunity is a key goal.’

‘It drives cases toward zero by slowing the spread of the virus through a combination of vaccination and infection-acquired immunity to maintain exponential decay — even as society resumes normal activities,’ she wrote. 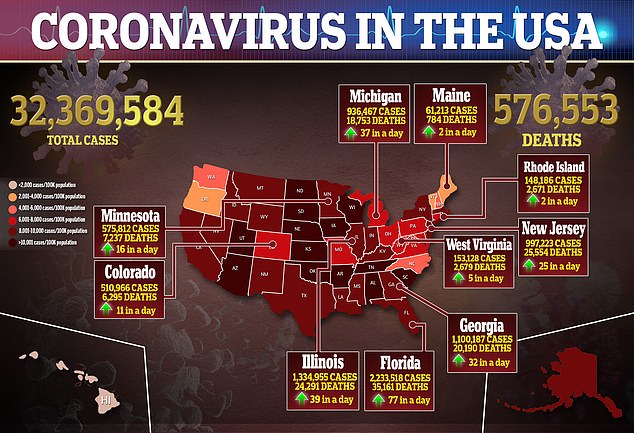 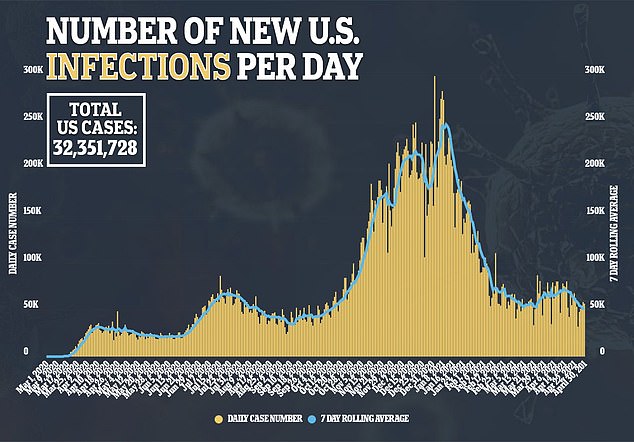 A chart shows that there have been a total of 32,351,728 cases of coronavirus in the United States since the start of the pandemic 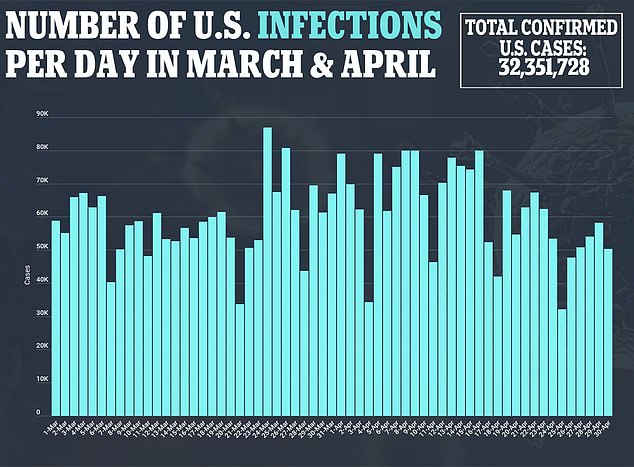 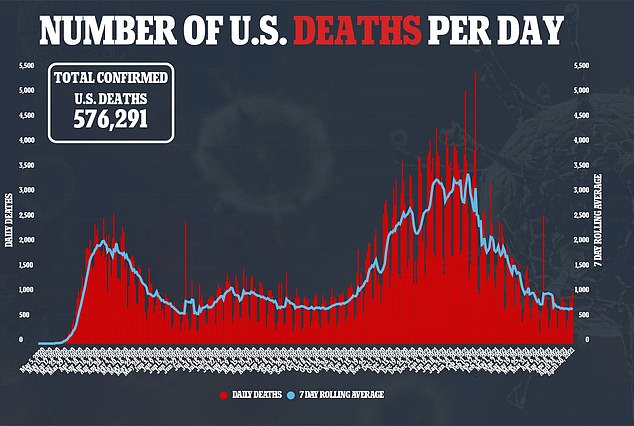 A chart shows that there have been a total of 576,291 coronavirus deaths  in the United States since the start of the pandemic 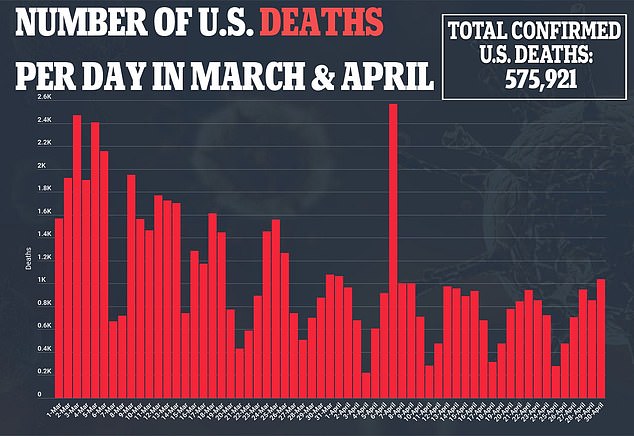 However, McLaren warned that reaching herd immunity does not prevent all outbreaks – just that they can be ‘snuffed out’ easily as they happen until the ‘outbreaks themselves become less and less common.’

In another op-ed in The New York Times on Saturday, Drs. Carl T. Bergstrom and Natalie Dean noted that ‘once enough immunity has been built in the population, each person will infect fewer than one other person.’

‘But an epidemic that is already underway will continue to spread,’ Bergstrom and Dean wrote. ‘If 100,000 people are infectious at the peak and they each infect 0.9 people, that’s still 90,000 new infections, and more after that.’

They added: ‘A runaway train doesn’t stop the instant the track begins to slope uphill, and a rapidly spreading virus doesn’t stop right when herd immunity is attained.’

Bergstrom and Dean wrote that if the pandemic went uncontrolled in the United States, ‘it could continue for months after herd immunity was reached, infecting many more millions in the process.’

‘By the time the epidemic ended, a very large proportion of the population would have been infected — far above our expected herd immunity threshold of around two-thirds,’ Bergstrom and Dean wrote.

In her article, McLaren said COVID numbers can be brought down quickly through the concept of exponential decay ‘even before vaccination rates reach herd immunity.’

She explained that the way to do that is through wearing masks and other preventative measures.

She wrote: ‘Every single thing people can do to slow transmission helps — including wearing masks, getting tested and avoiding crowded indoor spaces — especially given concerns about current and future variants, since it could be what gets us past the threshold into exponential decay.’